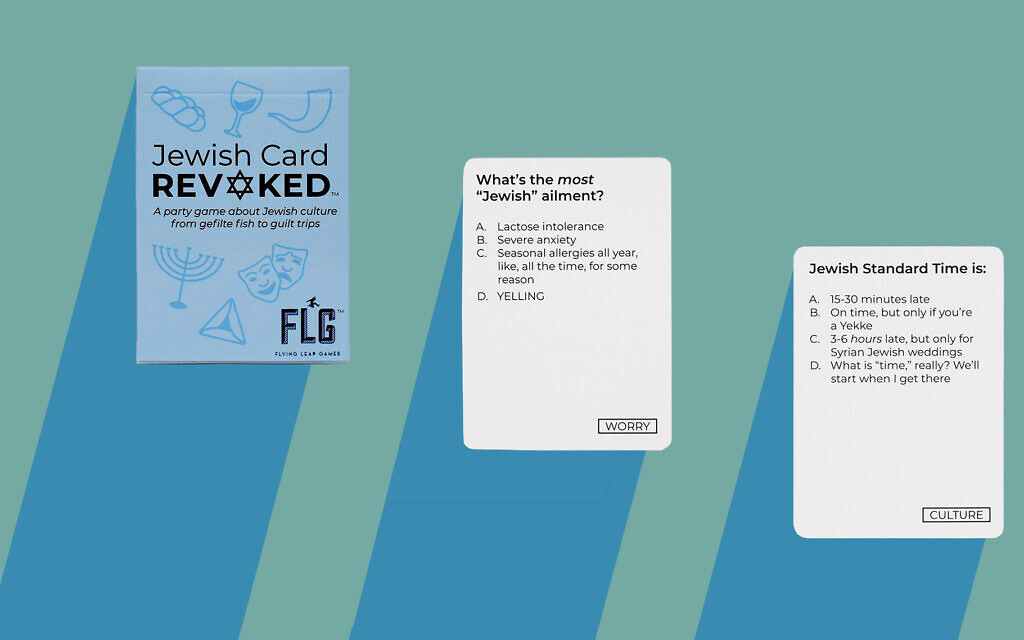 (JTA) — Excommunicating someone from the Jewish community is no laughing matter.

Unless you’re taking their last “Jewish card” because of their opinions on cinnamon-sugar bagels or the movie “Wet Hot American Summer.” Then you might just be playing a game of Jewish Card Revoked.

Modeled after the popular games “Black Card Revoked” and “Latino Card Revoked,” the new game attempts to unite Jews of nearly every background over a skill most of them value: the ability to make fun of themselves.

The game consists of cards that are each printed with one multiple choice question and four answers. The players vote on their preferred answer to each question, after which one representative of each answer makes the case for why their choice was best in 45 seconds or less.

Players start the game with 10 points each and lose one point every time they disagree with the majority. But Molly Zeff, founder of the game’s production company, Flying Leap Games, says the points don’t really matter.

“If you get to zero, your ‘Jewish card’ is revoked,” Zeff said. “But no one would actually care, it’s a party game, you just have fun.”

One of the biggest challenges in creating a Jewish party game that actually appeals to a broad swath of Jews is making sure the questions are engaging and funny for people from different backgrounds and communities. To do that, Zeff composed the questions together with four other writers and two editors from diverse backgrounds, including a gay Jewish comedian and a Sephardi Puerto Rican-Cuban Jew. Zeff describes herself as a “traditional egalitarian observant Jewish hippie who attends multiple kinds of services.”

“Any game that’s creating a light, fun approach to cultural humor, and any game more broadly, will benefit and be infinitely better from being created by a diverse team within that group,” Zeff said.

Zeff, 37, grew up playing party games with friends on weekends and even remembers skipping her high school prom’s afterparty to play games with friends. That love of games turned into a career in 2017 when she and a friend from childhood, Jonathan Cannon, released their first game, Wing It, in which players have to tell a story about how they would escape from a situation with a set of resources printed on cards. Zeff and Cannon formed Flying Leap Games after Wing It proved to be a success.

“I thought I could be weird for a living, and really be using my skill set,” Zeff said.

In the years since, the company has released two other games, including a sequel to Wing It and anoother called Million Dollar Doodle. Jewish Card Revoked is the company’s first Jewish-themed game.

Though it covers a diverse swath of Jewish backgrounds and experiences, several of the game’s questions feel like inside baseball. Answers to a question about what poses the greatest threat to Jews in the 2020s include “the patriarchy,” “the cost of Jewish education,” “taking the Pew report too seriously,” and “chocolate chummus [sic].”

Perhaps that’s why the game, though originally intended for secular Jews, became a hit among the Orthodox community. When Zeff recruited Orthodox women to test the game, she was overwhelmed by the response, scheduling 17 test games in 11 days.

“I realized that Orthodox Jews liked the game a lot,” she said. “And so it turns out that our main audiences were from very diverse spectrums, like mostly secular and mostly Orthodox Jews.”

Still, even with an audience of highly engaged Jews, some topics of Jewish interest didn’t translate well to the party game format.

Zeff had written a question about “which antisemitic stereotype or canard would most improve your life if it were true,” with answers referring to Jews controlling the banks or Hollywood. When she posted about it to her Facebook page asking for her friends’ thoughts, the responses surprised her.

“It unfortunately kind of led to antisemitic statements by Jews being like, well, isn’t this one true or like here’s some data on Jews and banks,” she said.

Plus, Zeff added, “Nobody wants to think about antisemitism during a game.” PJC