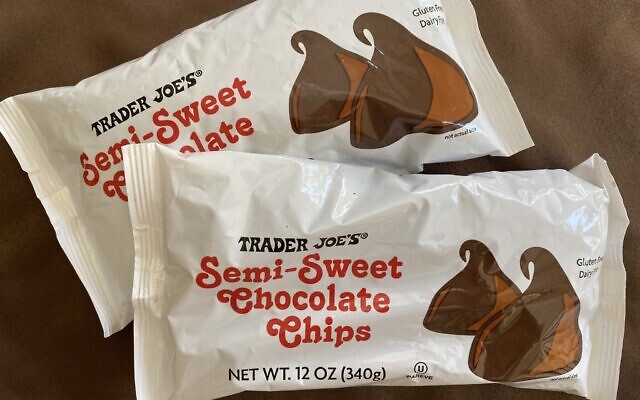 This piece first appeared on The Forward.

Kosher pareve semi-sweet chocolate chips have been returning to Trader Joe’s stores across the country in recent weeks, a delectable sight for halachic shoppers since they disappeared from the shelves in 2012.

It was a great kosher calamity at the time, reminiscent of the bank runs before the Great Depression. Frantic shoppers cleaned out the Trader Joe’s shelves and bought the pareve chips at steep markups on eBay.

Trader Joe’s instead began selling chocolate chips certified dairy, and that robbed many a kosher cook of an affordable, easily accessible chocolate option when meat is served — as it is for most Sabbath and holiday meals.

So the reintroduction of the pareve variety, is, for many a Jewish household, sweet news indeed.

Mia Bertoncin, manager of the Trader Joe’s store in Culver City — on Los Angeles’ Westside, said her customers have long waited for the pareve chips, and that the bags are flying off the shelves.

“We have a lot of excited customers at our West L.A. location,” she said. “People are asking us where they are. People have been buying them in bunches.”

The new OU-certified pareve chocolate chips are made by a different supplier, according to a company representative, and seem to use a different recipe than the semi-sweet dairy chips they are replacing. Compared to the dairy chips, which came in a clear plastic bag, the pareve ones — in white bags — are slightly softer.

The Monrovia, Calif.-headquartered grocer is also rolling out kosher pareve semi-sweet chocolate chunks in orange bags. Both chips and chunks come in 12-ounce bags which cost $1.99.

A San Diego kosher cook offered some insight as to why the chip change is a big deal.

“Pareve chocolate chips, especially decent ones, are hard to come by,” said Chaya Sara Ceitlin, whose post about the chips in the “Kosher Trader Joe’s” Facebook group has garnered nearly 1,000 likes and 170 comments. “The convenience is amazing.”

Ceitlin lives in San Diego, where the closest thing to a kosher grocery is a Ralph’s supermarket 20 minutes from her home that has a kosher section. She does the bulk of her grocery shopping at a Trader Joe’s five minutes away.

Trader Joe’s chocolate chips emerged as a staple of the kosher kitchen in the early 2000s, a Swiss-army ingredient for pareve desserts.

But why, less than a dozen years after they had found their way into so many Jewish homes, would Trader Joe’s pull such a beloved product?

At the time, the website kashrut.org reported that the recipe had not changed and no milk ingredients had been added to the process. Instead, the pareve chips had begun to share a packing machine with dairy chips, which could remain in the machinery. Because OK Kosher Certification (an Orthodox hashgacha unaffiliated with the OU) did not want to supervise the packing, it marked the otherwise pareve chips kosher dairy.

The loss was felt not only when it came time to plan Shabbat and holiday meals. For Ceitlin, who observes cholov yisroel — a dairy certification that requires kosher supervision of the milk itself — she could never bake with the dairy chips.

Trader Joe’s does not reveal its suppliers and did not say why it switched in this case, only that both manufacturers were U.S. based and the change occurred in the spring. A customer service representative at the Los Angeles-based company Torn & Glasser, which packed the most recent iteration of the dairy chips, said it took over the packaging on an interim basis during the pandemic, when the old supplier stopped being able to handle the Trader Joe’s order.

A Trader Joe’s customer relations specialist said a number of factors could prompt a change in supplier, including it going out of business.

Ceitlin surmised that desire for a product that is more useful to more customers drove the switch.

Ilana Blitzstein, an avid baker who lives in Pico-Robertson, a Jewish neighborhood in Los Angeles, said she likes the new chips slightly less than the previous pareve offering.

Since the 2012 hechsher change, Blitzstein has tried every kosher pareve chocolate chip she could find, looking for a replacement. Her favorite, the vegan semi-sweet chocolate chips made by California Gourmet, costs around five dollars a bag at kosher grocers.

The Trader Joe’s brand chips were not quite as good as those, she said, but they were still a major upgrade from most pareve chips.

“The kosher brands aren’t as high quality,” Blitzstein said. “They’re grainier, not as rich, not as chocolatey. They taste like they have some filler inside.”

Nearly a decade ago, when word got out that Trader Joe’s pareve chips were being retired, Ceitlin was still in school and unable to collect a stash before supplies ran out. But a month later, she received a bag as a wedding gift, which she decided to save for a special occasion. Three kids later, the bag remains in her freezer.

And though her local Trader Joe’s as of yet carries only the orange-bagged pareve chocolate chunks — as opposed to the chips — Ceitlin has already used them to baked chocolate chip cookie sticks.

“They’re fun to cook with,” she said. “There’s no added chemical taste.”

The new pareve chocolate chips are available at Trader Joe’s locations in Pittsburgh.

The Orthodox Union did not immediately return a request for comment. PJC

Click here to get the Forward’s free email newsletter delivered to your inbox.