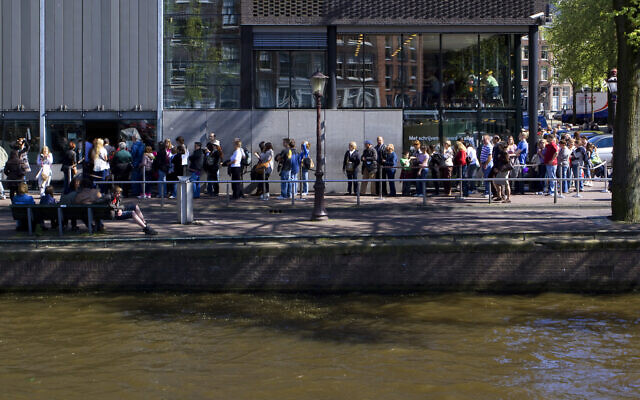 (JTA) — A team of researchers said they have identified the person who betrayed Anne Frank and her family to the Nazis 80 years ago: a Jewish notary forced to work for the Nazis.

The man identified by a cold-case team that has been working for six years to identify the persons responsible for the discovery of the Franks by Nazi authorities in occupied Amsterdam was Arnold van den Bergh, a notary and a member of the Jewish Council, which the Nazis established to better control Dutch Jews.

The accusation is outlined in “The Betrayal of Anne Frank,” a book published Monday by the Canadian author Rosemary Sullivan.

It is eliciting criticism from Dutch Jewish leaders who say the accusation unconvincingly and possibly unfairly lays the blame for one of the most famous betrayals in history on a Jew who cannot defend himself.

The book details the work of a team led by Vince Pankoke, a retired FBI agent, that set out to answer a question that has confounded researchers since Otto Frank, Anne Frank’s father, first published her diary in 1947 and turned his daughter into an international symbol of the destruction of the Holocaust.

The cold-case team discovered a letter sent anonymously in 1945 to Otto Frank, the only member of the family who survived the Holocaust, according to the book.

“Your hiding place in Amsterdam was in that time partly shared with the Central Agency for Jewish Emigration in Amsterdam by A. van den Bergh, who had lived near the Vondel Park,” the letter said.

A researcher probing collaboration between the Dutch and the Nazis received the letter from Otto Frank in 1963, but its existence was not widely known, the Amsterdam newspaper Het Parool reported Monday.

Frank had said in the past that his family had been betrayed by Jews, the newspaper reported, but never publicly named van den Bergh.

The Jewish notary survived the Holocaust, making him part of a small minority of Dutch Jews to survive, and died in 1950.

Over the years, researchers have presented various hypotheses on who may have betrayed the Franks to the Nazis, though none of the suspects were accepted as consensus.

A 2015 book identified Nelly Voskuijl, a niece of the Dutch resistance activist Elisabeth “Bep” Voskuijl, as the person who likely betrayed the Franks. The book alleged that Nelly Voskuijl was a Nazi collaborator who may have revealed the whereabouts of the hideout where her sister was helping the Franks hide.

In 2016, the Anne Frank House in Amsterdam, a museum devoted to the memory of the family, published a study alleging that the raid in 1944 on their house may have been over illegal trade in food rations and other issues and not the result of betrayal.

The cold case team cannot ascertain with certainty that van den Bergh betrayed the Franks, but did say that the theory involving him is the only one backed by evidence.

A handful of leading Dutch Jews responded to the new investigation by saying its conclusion should not be trusted — and might even be inappropriate to allege.

In a column published Monday in the conservative Dutch newspaper Reformatorisch Dagblad, Dutch Chief Rabbi Binyomim Jacobs condemned the accusation, saying it was “unethical” because it was not certain that van den Bergh committed the acts attributed to him and is unable to defend himself.

“It’s remarkable how the betrayal of Anne Frank and her family was laid at the feet of a member of the Jewish Council who can no longer defend himself,” Ronny Naftaniel, chairman of the Central Jewish Organization of Dutch Jews, wrote on Facebook. He added, “The assertion that Otto Frank knew about it but said nothing seems like speculation.”

Meanwhile. Bart van der Boom, a Leiden University historian who has written extensively about the Jewish Council, dismissed the findings of the cold case team as “libelous nonsense.” The letter sent to Otto Frank was written amid a “swirl of rumors about who betrayed whom,” the Historisch Nieuwsblad quoted van der Boom as saying. PJC