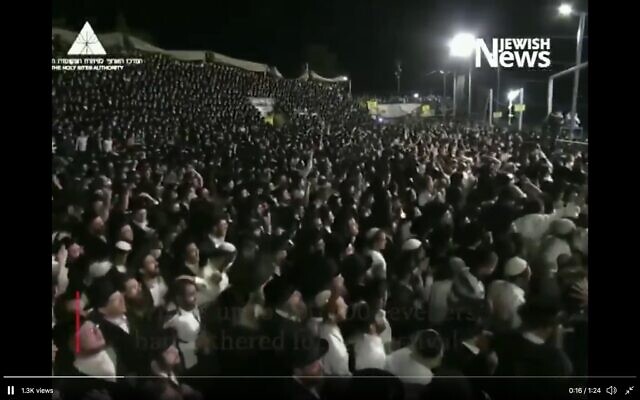 (Screenshot via Jewish News via The Times of Israel)

At least 45 people were crushed to death and more than 150 people hurt, including many in critical condition, in a stampede after midnight Thursday at a mass gathering to celebrate the Lag B’Omer holiday at Mount Meron, medics said. Prime Minister Benjamin Netanyahu called the incident “a terrible disaster,” promised a thorough investigation, and said that Sunday would be declared a day of national mourning.

Army Radio reported that children were among the dead and injured.

The event appeared to be one of the worst peacetime tragedies in Israel’s history, with a death toll higher than the 44 who lost their lives in the 2010 Mount Carmel forest fire.

Several hospitals opened hotlines for people to search for family and friends who may have been injured; Galilee: 04-9850505, Ziv: 04-6828838 and Poriya: 04-6652211. Police could also be contacted at 110. Efforts to identify all the victims and contact all the families were expected to be protracted, with some living overseas.

The Magen David Adom rescue service said the tragedy was caused by a crush and overcrowding.

A police official said the incident was centered on a slippery walkway, with a metal floor, where crowding was at a height.

Large numbers of participants in a concert had been moving through the walkway, which was on an incline, many of them “slipped,” falling on those below them, causing a crushing domino effect, the official said.

“The rescue teams were called to one of the concerts near Bar Yochai’s tomb, where there was a terrible crush near a building. There were dozens trapped on a nearby stand and it took time to evacuate them,” Heller said.

“There are fatalities, it is a very terrible tragedy,” he said, adding that it was a very complicated rescue effort that was still ongoing throughout the night.

Pictures from the scene showed bodies covered in blankets and bags, and, later, a video appeared to show rows of body bags.

Images from the initial moments of the unfolding tragedy showed rescue workers attempting to set up a field hospital and dozens of ambulances trying to navigate through the huge crowds.

Video from before the incident showed tens of thousands of people in the makeshift arena, dancing and jumping up and down on the stands to music.

Chaos as children search for parents

A Zaka emergency rescue officer speaking at the service’s field hospital at the site told Channel 12 news that there was chaos at the scene, with parents separated from children. 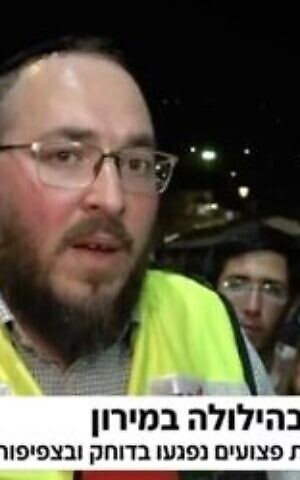 A Zaka emergency rescue official describes the tragecy at Mt. Meron (Channel 12 screenshot via The Times of Israel)
He said Zaka was trying to gather all the children who had become separated from their parents at the Zaka facility. “We are trying to locate people who are believed to be missing… to organize a register of names,” he said.

Cellphones were not working, he says, and the situation was chaotic.

“There are more than 30 children here right now… whose mothers and fathers aren’t answering the phone.”

“Without getting graphic,” he said, “I’ve been with Zaka for decades. I’ve never seen anything like this… We don’t know exactly what happened, but the result is unthinkable.”

Zaka has a long history of dealing with tragedies, including collecting body parts from suicide bombings.

He said all the injured had been evacuated from the site.

At around midnight Thursday, organizers had estimated that some 100,000 people were at the site. Other estimates put the number at some 50,000.

Police shut down the entire event after the fatal incident and helped evacuate all the participants through the night. Roadblocks were set up to prevent people from arriving at the scene.

Earlier police struggled to clear the crowds from the scene to allow access to ambulances. Loudspeakers called in Yiddish and Hebrew for people to make way and let rescuers come through.

Israel’s Chief Rabbi Israel Meir Lau, who was on one of the stages at the time of the tragedy, remained there with other leading rabbis, saying psalms for the wounded.

President Reuven Rivlin tweeted that he was watching developments with great trepidation and praying for those who were hurt.

Netanyahu called the incident “a terrible disaster,” said “everyone is praying for the recovery of the injured,” and offered his support to rescue workers at the scene.

The huge gathering, the largest in Israel since the outbreak of the coronavirus pandemic, had already sparked health fears.

Due to the large crowds, police had said they were unable to enforce coronavirus restrictions at the site.

Earlier in the evening, the Magen David Adom ambulance service said it treated 148 people at Mount Meron during the day, including eight who were taken to the Ziv hospital for further treatment.

Most were treated for fainting, heart problems, light injuries and exhaustion, though two attendees were in critical condition at the medical center: An 80-year-old man who lost consciousness and was evacuated as medics attempted to resuscitate him, and a 40-year-old who was evacuated after suffering an acute allergic reaction.

Health Ministry officials had urged Israelis not to travel to Mount Meron, worried the festivities could lead to mass coronavirus contagion.

Some 5,000 police officers were said to have been deployed at the event. PJC