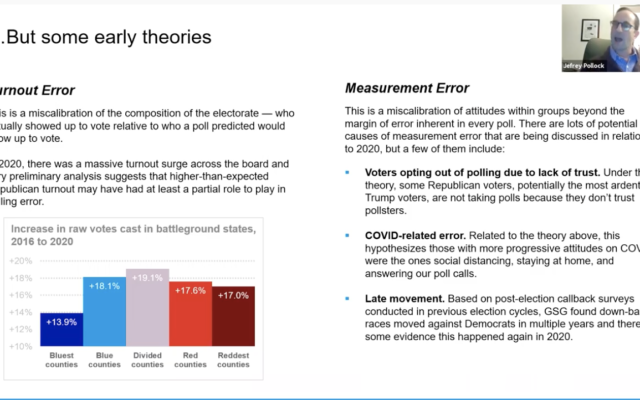 Jefrey Pollock discusses theories that try to explain why the polls were off so badly in 2020. (Screenshot by Jesse Bernstein)

When it comes to the 2020 presidential election, it’s all over but the shouting. Joe Biden has taken office as the 46th president of the United States. But what actually happened?

Where did Democrats make gains, and where did Republicans do the same, and why? How can it be that, in many cases, overestimation of the Democratic margin was even more egregious than the much-discussed mistakes in 2016? And what do the finer points of voting and polling patterns mean for Jews?

All these questions were the subject of a Jewish Battleground Coalition webinar hosted by Jewish Democratic groups in Wisconsin, Texas, Minnesota, Michigan, Georgia, Florida and Pennsylvania. The two speakers at “Blue Wave/Red Shift: Trends in Polling & the Jewish Vote from 2020 & Beyond” discussed the 2020 election polling via Zoom on Jan. 27.

Brandishing a seminar’s load of charts, graphs and maps, pollsters Jefrey Pollock and Ira Sheskin tried to explain it all. Democratic Jewish Outreach of Pennsylvania Chair Jill Zipin moderated the event along with Samuel Edelman of the Israel on Campus Coalition.

Pollock, who is a sought-after pollster for Democratic candidates and liberal organizations, didn’t offer comforting assessments for Democrats.

Biden and the Democrats may have won the House, the Senate and the presidency, Pollock said, but the monumental GOP turnout ensured that the Democrats’ majority was the slimmest of the postwar era. It wouldn’t have taken much of a flip for a radically different outcome; according to Pollock, Biden wouldn’t been elected if the pandemic hadn’t taken discussion away from the strength of the economy prior to March 2020.

“If you look at the numbers there, we’re talking about 44,000 votes,” Pollock said, directing his audience to a red and blue map. “If they had flipped the other way, Biden loses, and Donald Trump is president of the United States.”

Dramatic overestimation of the Democratic margin by public polls in key states, Pollock said, was avoided by private polling by outfits like his own, Global Strategy Group. Still, questions remain as to why, after four years of tinkering by public pollsters, an error of more than six points in Wisconsin in 2016 became an error of almost eight points in 2020.

Pollock discounted commonly held explanations about Trump voters reluctant to tell pollsters about their preferences, pointing out that similar overestimations of the Democratic margins were made in races featuring Republican senatorial candidates like Steve Daines and Joni Ernst.

“There’s no evidence for a shy Trump voter,” Pollock said.

John McLaughlin, whose McLaughlin & Associates has polled for the Republican Jewish Coalition, Israeli Prime Minister Benjamin Netanyahu and Hungarian Prime Minister Viktor Orbán, was not at the webinar, but shared Pollock’s skepticism about the “shy Trump voter.”

“They basically start with a narrative and then manufacture polls that are either skewed by sample or demographics,” McLaughlin said.

Pollock and Sheskin saw it differently.

Sheskin, a professor of geography at the University of Miami and director of the Jewish Demography Project, posited that a mistrust of institutions kept Republicans from taking part in polls. And neither he nor Pollock believed the overstatement of Democratic margins was the result of deliberate malice. Rather, they provided evidence that there were flaws in sampling methodology.

Some question formations could result, for instance, in a higher percentage of Jewish voters who call themselves “Jews of no religion,” a group that tends to vote Democratic. But other polls that only yield Jews with specific religious affiliation might skew Republican. Either way, a non-representative sample is the result, Sheskin cautioned.

On winning messages for Jewish voters in 2022, Sheskin and McLaughlin came to similar conclusions, identifying support for Israel as key for any candidate. But American Jews, they concluded, are more likely to base their vote on the economy than Israel. PJC

Jesse Bernstein is a writer for the Jewish Exponent, a Chronicle-affiliated paper.