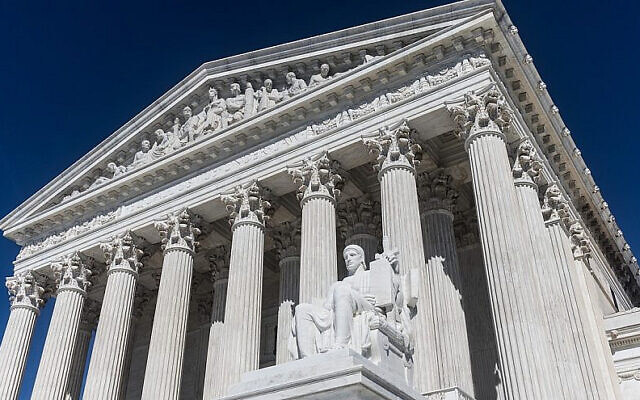 The U.S. Supreme Court. (Photo via Pixabay via JNS)

(JNS) In a unanimous decision, the U.S. Supreme Court ruled on Wednesday against the heirs of Holocaust victims seeking to recover their families’ art treasures and other property seized by Nazi Germany in the 1930s.

The ruling, as reported by Bloomberg Law, concerned two cases: one consisting of 42 medieval relics known as the “Guelph Treasure” owned by Jewish art dealers in Germany and estimated to be worth $250 million, and the second concerning property seized from Jewish citizens in Hungary before they were sent to their deaths in concentration camps.

In the first case, the heirs say their relatives were forced to sell the treasure at 35 percent of its value. They brought the cases to the United States after being rebuffed by courts in Germany, arguing that the forced sale of the treasure and other property violated international genocide laws.

The Supreme Court, however, disagreed, ruling that expropriation of property is an exception that falls under the “domestic takings rule” that states that a country is allowed to take property from its own citizens and that seizures are not violations of international law. Rather, they are a domestic matter.

The exception would be if property was seized from foreign nationals.

“United States law governs domestically but does not rule the world,” Chief Justice John Roberts wrote in the decision.

“Look what you’re opening up,” said Justice Stephen Breyer during arguments, as quoted by Bloomberg Law. He noted that, if this were the case, the list of things that America could be held accountable for in foreign courts would go “on and on.”

The battle to recover the artwork began in Germany in 2008 when the heirs first sued to secure the artwork. In 2014, the German Advisory Commission on Nazi-looted art ruled in a non-binding decision that the sale had not taken place under duress, reported Artnet.

The case was then taken to a U.S. district court in Washington, D.C., which twice upheld Germany’s position.

Now, after being heard by the U.S. Supreme Court, the cases have been once again been sent back to the district court to determine whether or not arguments can be made with different reasoning.

Specifically, lawyers for the plaintiffs could contend that Jews in Nazi Germany were not considered to have German citizenship, which would make the law of domestic takings no longer applicable, and potentially put the cases under international jurisdiction where laws of genocide could be applied.

The Guelph Treasure currently falls under the jurisdiction of the Prussian Cultural Heritage Foundation, which runs Berlin’s state museums, and is on display at Berlin’s Museum of Decorative Arts. PJC