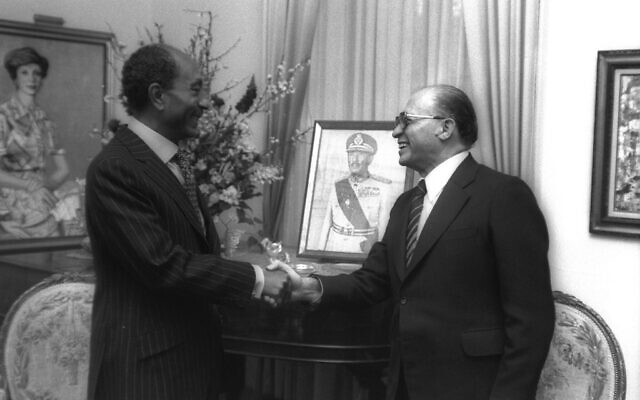 If “Upheaval: The Journey of Menachem Begin” was a Netflix-commissioned documentary, we’d be subjected to six one-hour episodes with countless repetition, speculation and other means of filler.

And considering that it now takes Hollywood nearly three hours to tell the back story of Spiderman, Batman or even the third-tier superheroes, “Upheaval” is a breath of fresh air.

Clocking in at a spare one hour and 26 minutes, “Upheaval” smartly tells the epic life story of the seminal Israeli leader. Director Jonathan Gruber effectively mixes new interviews, with notables such as former Israeli ambassadors to the United States Michael Oren and Ron Dermer, and news footage with archival accounts of Begin’s (and Israel’s ) history with no wasted motion.

“Upheaval” begins with a montage of accounts of recent antisemitic attacks around the world as a way to show that Begin’s lifelong struggle to provide security for Jews continues today.

That theme continues through the film’s final moments.

“Begin’s Israel is an Israel of proud Jews who are not going to take antisemitism any more, but are going to unite and fight, and that’s a power lesson from Begin’s life,” former vice presidential nominee and U.S. Sen. Joseph Lieberman said.

Born in Brest, Belarus, Begin’s Zionism is established at an early age when he meets Ze’ev Jabotinsky, who espouses the love and need for a Jewish state. Begin soon leads Betar, a Zionist youth movement Jabotinsky founded.

Around the same time, he meets Aliza Arnold, who he marries at 19. She becomes the rock in his life. 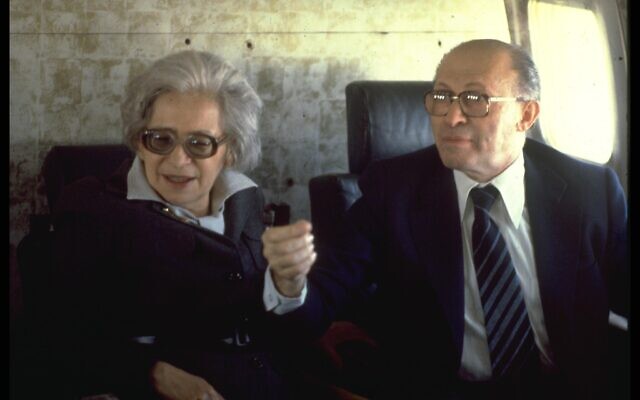 Menachem Begin and his wife Aliza on their way to the United States for the peace treaty signing between Israel and Egypt at the White House.
(Photo courtesy of Abramorama / Photographer Ya’acov Sa’ar via Jewish Exponent)

During World War II, Begin is arrested for “Zionism,” as he describes it, and, without being tried, ends up in a Siberian gulag. He gets a reprieve of sorts when Germany invades Russian, as he’s conscripted to fight the Nazis.

Upon arriving in Palestine in 1942, Begin immediately begins to chafe against the British mandatory government, proclaiming a revolt two years later and going underground.

The film continues through events leading to Israel’s 1948 founding, exploring the conflict between the more hardline Begin and his rival, Israeli founder and first Prime Minister David Ben-Gurion, who was more conciliatory.

Begin didn’t want to accept reparations from Germany, but Ben-Gurion thought the money would help build Israel – and wins that battle.

If there’s any drawback to the film, it’s at this point, which largely skips over the next 29 years, noting that Begin spent that time in the opposition, largely with the Herut party he formed. Granted, more important moments await, but a bit more depth – even 10 minutes – would have been helpful.

As you’d expect, Begin’s upset 1977 election as leader of the Likud Party and the subsequent peace talks with Egypt occupy a significant chunk of the movie.

While those events are familiar and well-documented, the film’s account is far from rote, with archival footage conveying a lot of meaning in short snippets.

“The real prize is peace itself,” Begin says over the telephone to Egyptian President Anwar Sadat while discussing their winning of the Nobel Peace Prize.

At perhaps the height of his powers, Begin establishes the Begin Doctrine — sort of a “do unto others before they do unto you” — in 1981 with the bombing of Saddam Hussein’s unfinished nuclear reactor.

“Israel has nothing to apologize for,” Begin defiantly said. “We decided to act now before it’s too late.”

Unfortunately for Begin, the beginning of his end was near. The 1982 Lebanon War became his Waterloo (or Vietnam).

While Minister of Defense Ariel Sharon is often blamed for extending the conflict far beyond its original scope — and for the Israel Defense Forces not doing enough to prevent the Sabra and Shatila massacre — Begin took responsibility, as well as the political hit.

Between that and his wife dying in November 1982 while he was away on a visit to the United States, Begin was never the same. Plagued by depression and his own health issues, he resigned in August 1983, staying mostly secluded until his death at 78 in 1992.

While Begin earned his reputation as a hardliner, the film reminds us that nothing is ever as simple as it seems, pointing to his willingness to transfer control of the Sinai as a way to broker peace with Israel, as well as his advocacy for inclusiveness that included Israeli Arabs and his support for the immigration of Ethiopian Jews, Russian Jews and the Vietnamese boat people.

Ultimately, his goal was the same as nearly everyone’s else’s: Peace.

“Peace is the beauty of life. It is sunshine. It is the smile of a child. The love of a mother. The joy of a father. The togetherness of family …” he said.

“Upheaval” was shown virtually by Pittsburgh’s JFilm in April 2021, and will have a Watch Now @ Home cinema release on June 9. Visit upheavalfilm.com for details. PJC

Andy Gottlieb is the managing editor of the Jewish Exponent, an affiliated publication, where this first appeared.