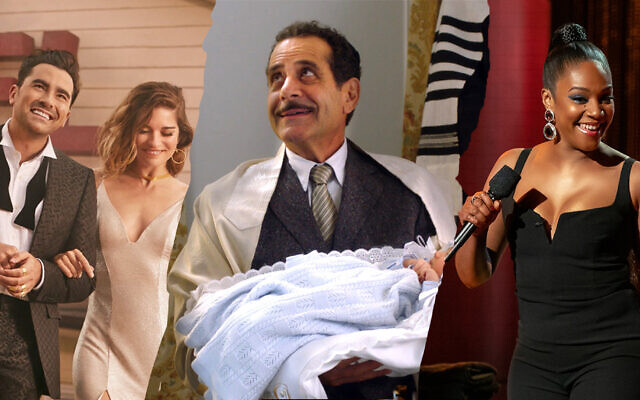 Among the 2020 Emmy Awards nominations were, from left, "Schitt's Creek," "The Marvelous Mrs. Maisel" and "Black Mitzvah." (Image design by Emily Burack/Stills via Pop TV/Amazon Prime/Netflix)

(JTA) — Though much about the 2020 Emmy Awards ceremony is not yet known, one thing is clear: Jewish TV stars are well positioned to clean up.

Dozens of Jewish actors and creators were on the list when this year’s nominations were announced Tuesday. Read through to see who could take home prizes when the awards show airs in September.

One notable show that was shut out: “The Plot Against America,” the HBO miniseries that depicts an alternate history in which isolationist Charles Lindbergh wins the 1940 presidential election and encourages anti-Semitic attitudes throughout the United States.

“Unorthodox” makes its mark on the drama categories

Haas, an Israeli, learned Yiddish for the role. Playing Esty was “probably one of the most, if not the most, complex characters that I had the chance to play. It is so rare to get such a main and amazing female role. I was so lucky to get it.”

Winger told Kveller that working on “Unorthodox” was the first time she worked with a predominately Jewish cast.

“I usually say it takes a village to make a show,” Winger said. “For ‘Unorthodox’? It takes a shtetl.”

Tiffany Haddish’s Netflix special “Black Mitzvah” was nominated for outstanding variety special along with fellow Jewish comedian Jerry Seinfeld, who was tabbed for his “23 Hours To Kill.”

Haddish spoke with Alma about her journey to claiming her Jewish heritage (her dad was an Eritrean Jew) and her decision to study Torah and become a bat mitzvah.

“When I came up with the concept for my special,” Haddish explained, “I was trying to figure out a way to tell my truth, my experiences in life, and also maybe open other people’s eyes to the fact that in African American culture, there is nothing that says, ‘OK, you’re officially a woman,’ or ‘You’re officially a man.’ There’s no ceremony. There’s no rite of passage … Knowing who you are, knowing where you come from, that’s what makes you an adult. And being able to share your story. That’s what I love about Judaism, because it’s all about sharing your stories and questioning and learning from each other.”

“Schitt’s Creek” gets recognized for its final season 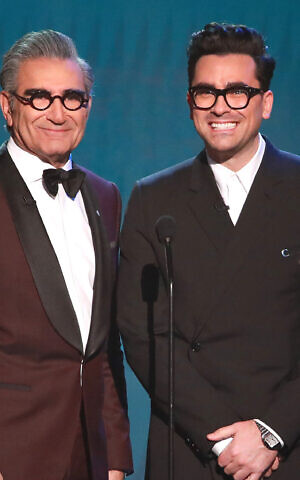 “Schitt’s Creek,” created by the Canadian Jewish father-and-son duo of Eugene and Dan Levy, walked away with 15 nominations for its critically acclaimed final season. The show was nominated for best comedy series, and all four stars were recognized: Eugene Levy, for lead actor in a comedy series; Catherine O’Hara, lead actress; Dan Levy, supporting actor; and Annie Murphy, supporting actress.

The younger Levy was nominated as well for writing the finale episode, “Happy Ending,” and for his direction of the episode.

The third season of the Jewish comedy “Marvelous Mrs. Maisel” scored 20 nominations, including for outstanding comedy series and lead actress Rachel Brosnahan in her portrayal of Midge Maisel. Jewish actress Alex Borstein was nominated again in the best supporting actress category — she has won the last two times she was nominated. Borstein will be competing against her follow “Maisel” star Marin Hinkle. Other “Maisel” acting nominations include Sterling K. Brown, Tony Shalhoub, Wanda Sykes and Luke Kirby.

Amy Sherman-Palladino was nominated for directing an episode, as was her husband and co-creator Dan Palladino. As Sherman-Palladino told the Jewish Telegraphic Agency earlier this year, “I’ve always viewed comedy, especially at this time, as a Jewish creation — like the rhythm, the cadence.”

The vampire mockumentary comedy “What We Do In the Shadows” — co-created by Taika Waititi, a Jewish Māori director, writer and actor, and Jemaine Clement — earned eight nominations, including one for outstanding comedy series. (Waititi was also nominated for his voice-over performance in “The Mandalorian.”)

Waititi tweeted, “The idea that never dies. Congrats to everyone who decided to drag this joke-turned-movie into the world of television. Especially to @AJemaineClement who I tricked into doing it in the first place. Suckaaaa!”

Jewish showrunner Liz Feldman’s “Dead to Me,” which scored four nominations, is also competing in the outstanding comedy series.

Also in the comedy category: “The Good Place,” which ended this year, helmed by Jewish showrunner Michael Schur. Schur also earned a nomination for writing. “The Good Place” earned a total of seven nominations.

“Big Mouth,” the Netflix animated show about puberty, was nominated three times — including for best outstanding animated program. Season 3 featured a very Jewish episode at a Seder in Florida. The show was co-created by Nick Kroll and Andrew Goldberg based on their Jewish childhoods in suburban New York’s Westchester County.

“BoJack Horseman,” which wrapped up its sixth and final season this year, also will be competing in the best animated series category. The show’s creator, Raphael Bob-Waksberg, is Jewish. 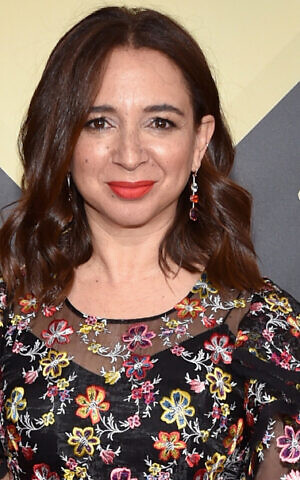 Maya Rudolph is up for three Emmys. (John Shearer/Getty Images for People Magazine)

Maya Rudolph is competing against herself in the guest actress in a comedy series role — for her role on “The Good Place” and her guest appearance as Sen. Kamala Harris on “Saturday Night Live.” She was nominated as well for her voice-over work as Connie the Hormone Monstress on the very Jewish animated show “Big Mouth.”

Julia Garner was nominated for outstanding supporting actress in a drama series, a category she won last year.

And while not portrayed by Jewish actresses, Margo Martindale’s portrayal of the legendary Jewish politician Bella Abzug and Tracey Ullman’s of the Jewish feminist Betty Friedan both received nominations. “Mrs. America,” the FX show about the fight for the Equal Rights Amendment, walked away with 10 nominations.

… As do two shows about cranky old Jews 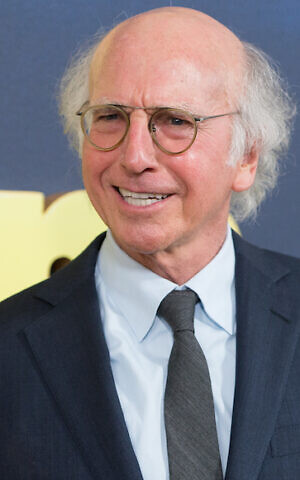 Larry David’s “Curb Your Enthusiasm” earned four nominations, including outstanding comedy series, but David himself was not nominated.

“The Kominsky Method” earned three, including one for Michael Douglas‘ portrayal of Sandy Kominsky, a Jewish acting teacher, and Alan Arkin‘s Norman Newlander.

The Emmy Awards will air Sept. 20 on ABC in a virtual ceremony hosted by Jimmy Kimmel. PJC