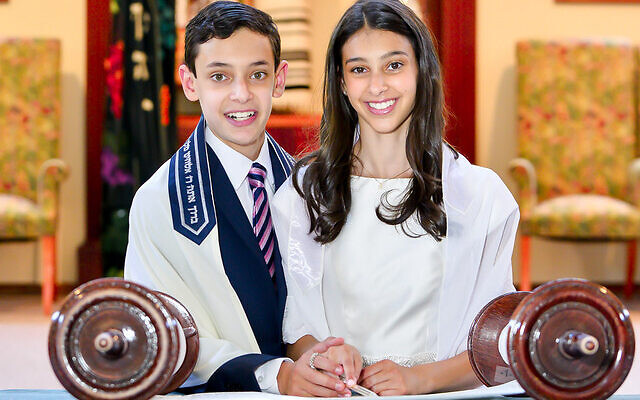 Simon and Ruby Meyers celebrated their b’nai mitzvah on Saturday, June 12 at The Conservative Synagogue in Westport, Connecticut. Simon and Ruby are the son and daughter of Heidi and Matthew Meyers, and the brother and sister of Paz and Lewis, all of Westport, Connecticut. Their grandparents are John Stayn of Lexington, Massachusetts and the late Patricia Stayn, and Jack and Bernice Meyers of Pittsburgh (Oakland). Simon and Ruby are both rising 8th graders at Pierrepont School in Westport, Connecticut, where they both participate in Mathcounts, Debate club, and Theatre. At school. They also each study Latin, Ancient Greek, and Mandarin. When not in school, Ruby enjoys studying ballet and contemporary dance. She has been in many local performances including The Nutcracker and Sleeping Beauty and has studied dance during the summer at American Ballet Theatre and Joffrey Ballet School in New York City. She also enjoys baking challah weekly with her grandmother and aunts and loves attending Camp Ramah in Palmer, Massachusetts. Simon enjoys playing basketball, soccer, and ultimate frisbee. He is a huge fan of the Patriots, Penguins and Pirates. He has a passion for math, and has competed in many math competitions, both individually and with his friends from the math camps he has attended. For their mitzvah project, Simon and Ruby collected food and children’s pajamas to donate to The Open Door, a food pantry and shelter in Norwalk, CT, to combat the challenges, especially for children, posed by food insecurity and homelessness, particularly during the past 16 months.