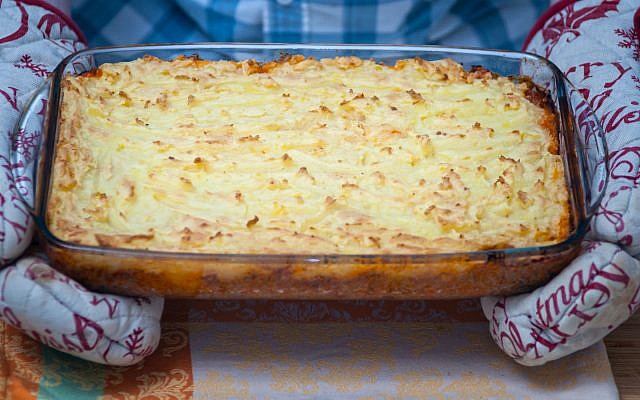 The baked ziti Matthew Falcone brings to a shiva helps him reconnect to his Italian upbringing.

“It has always been a part of my family tradition that when someone dies, you bring copious amounts of food for their family,” said Falcone, president of Rodef Shalom Congregation.

For Falcone, the food serves as a bridge between his life before he converted to Judaism and today.

“When you convert, you have to navigate what you’re going to bring to the religion, what kind of practices you change,” he said. “Italians have a lot of rituals about death and how grieving works. Once I started the conversion process and began to understand how shivas worked, there were a lot of commonalities there. So, instead of bringing a plate of cold cuts or bringing bagels, I thought I would continue making ziti.”

Falcone said the dish is always warmly welcomed, partly because it’s, well, warm. He noted that often families are overwhelmed by too many trays of cold cuts and lox and bagels, and appreciate the thought that goes into a home-cooked dish.

“Plus, it adds a little variety,” he said.

When Lynn Rubenson makes the noodle kugel that she brings to families sitting shiva, she’s continuing a tradition started by her mother.

In fact, Rubenson said the casserole pan she uses to bake the kugel still has a piece of masking tape on the bottom with her mother’s name — a throwback to the days when people would make sure their name was on the pan so families who received many different dishes would know who it belonged to.

Rubenson said that shiva hospitality at Temple Sinai, where she is a member, extends a lot further than simply bringing food to families in mourning.

“We have shiva coordinators that help set up chairs and get out prayer books,” she said. “Sometimes people need more help.”
It’s not always a hot meal that provides comfort during a shiva.

Paula Fingeret-Rulin said the challah bread she brings to a shiva is informed by her experience after her father passed away, when her family received an overabundance of main dishes.

“It’s just not in our DNA to waste, so after that experience, when I go to a shiva, I bring challah because it’s something that everyone appreciates unless you can’t eat gluten,” she said. “And, it’s a gift from the heart.”

Fingeret-Rulin goes the extra mile when it comes to comforting mourners. In addition to the challah, she leaves a card letting the family know that when they’re ready, she will bring them a Shabbat meal.

Most families, she said, really appreciate the Shabbat meal because they’re still grieving after the shiva and don’t necessarily feel like cooking.

While the Squirrel Hill native considers herself a baker, she admits that the challah recipe she uses isn’t her own. It’s from Chani Altein, co-director of Chabad of Squirrel Hill.

Altein doesn’t take food to a family during shiva, but like Fingeret-Rulin, makes a Shabbat dinner for them instead.

“Generally, if the family isn’t vegetarian, I do chicken legs and some starch on the side, and a salad and soup — if it’s winter — or another vegetable dish, and then a dessert,” Altein said. “I really feel like food is one of those ways you can show your love and that you care.”

Beth El Congregation of the South Hills has a more expansive tradition than simply bringing a platter of food to a shiva.

“We do something that I don’t think any other congregation in the country does,” said Cheryl Kirshner, who organizes the congregation’s shiva assistance committee. “We take over for the families. It’s such a difficult time for them to deal with things like who to order food from for the meal of consolation. So, we offer to take care of it for each and every family.”

Pre-pandemic, Kirshner said, the committee would bring food to the family’s house for the meal of consolation and set up everything in preparation for their return home from the funeral, and then stay to help clean up. For the last year, though, the committee has dropped off food at a family’s front door, which she said feels like a “weird” way to interact with a family mourning.

Kirshner said the food for the consolation meal can be anything the family desires, but traditionally it includes a fish tray or cold cuts, salads, kugel and hard-boiled eggs.

“Shiva is different,” she said. “It’s open to the community. We provide all the beverages and pastries if enough hasn’t been brought. We try and make sure the families have dinner for the entire week of shiva.”

For Falcone, the idea of comforting survivors after a death is natural, unique and wholly Jewish.

Directions:
Make sauce. (For my sauce recipe, you’ll need to marry into la famiglia. But, if you’re using Hunt’s as your base, or cooking for less than three days… reconsider your life choices.)
Boil ziti in salted water according to package directions, then drain thoroughly.
Combine ricotta with garlic, pepper, salt, rosemary and oregano.
Set oven to 425 F.
Layer sauce (start with bottom layer of sauce), ziti, ricotta filling, and dust with mozzarella and parmesan cheese until pan is full.
Make sure the top layer has extra cheese
Bake 30-40 minutes until sauce is bubbling and cheese on top is golden brown.
Cool, wrap in foil – then deliver.

Directions:
Boil water in Dutch oven then add noodles.
Cook until al dente.
Strain noodles and put back in the pot.
Add butter and eggs and mix well until butter is melted and eggs are absorbed.
Add sour cream, cottage cheese and orange juice and mix well.
Add sugar and cinnamon and mix well.
Grease a 9-by-12-inch glass baking dish with butter and add noodle mixture.
Crush corn flakes and cover the top. Dot with butter or margarine.
Bake at 350 F for 1 hour or an hour-and-a-half (depending on your oven), until a toothpick comes out clean.

Dissolve yeast, 1 tablespoon of sugar and warm water in mixing bowl and set aside until bubbly.
Add 1 1/4 cup sugar, oil and eggs and mix.
Add the salt, then gradually add the flour, cup by cup.
Knead dough until smooth. (Add a little more flour if needed.)
Allow dough to rise 1 hour, then shape and brush with egg (or egg and honey) mixture.
Allow loaves to rise 1 more hour, then bake uncovered at 350 F for 35-45 minutes, or until golden brown. PJC