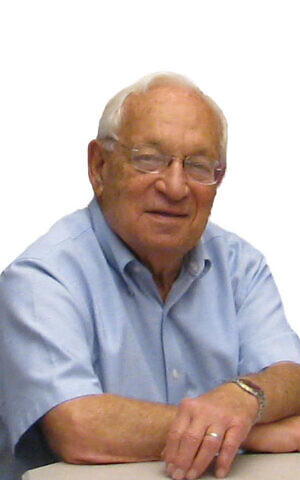 BASKIN: Seymour Baskin, 96, passed away peacefully on Jan, 8, 2022, in Prescott Arizona. Beloved husband of Sandy (Lee); father of Roberta Baskin (Washington D.C.), Barbara Baskin (Tampa, Florida), Deborah Hall (Franklin, Massachusetts), Tracy Carter (Prescott, Arizona); and grandfather to five grandchildren and three great-grandchildren.
He was born in Brooklyn, New York, on June 7, 1925, to Samuel and Sadie Baskin. Along with his parents, Seymour was predeceased by his brothers Phil and Jerome.
In 1950 he earned his law degree from the University of Pittsburgh and from there he went into general law practice as a partner in the firm Baskin, Sachs, Gondelman and Craig. In 1969 he formed National Development Corporation providing affordable and conventional housing throughout the east coast. He served as chairman of the board of National Development Corporation until he retired.
Seymour was a proud veteran who served in the U.S. Navy.
For many years, Seymour served as special counsel to the Department of Urban Affairs and Federal Housing Administration.
Seymour also served on the board of the United Jewish Federation and was a longtime member of the Temple Emanual of South Hills.
Seymour enjoyed traveling, golfing, playing cards as well as having cocktails with friends. He remained loyal to all the Pittsburgh sports teams.
A service of remembrance will be scheduled at a later date. PJC