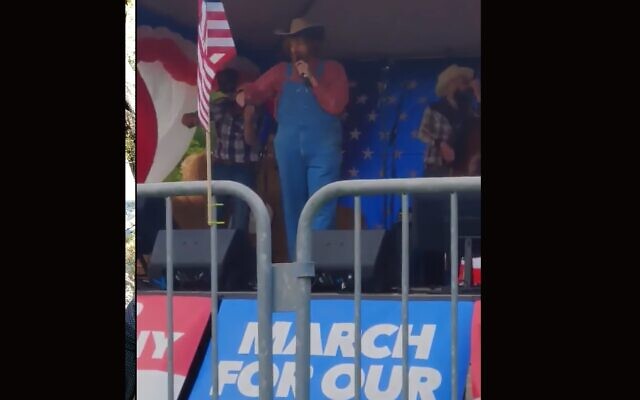 The hundreds of people who attended a right-wing militia event in Olympia, Washington, on Saturday expected music. But they were surprised when one performer turned out to be comedian Sacha Baron Cohen, who delivered an incognito performance that got some of them singing along with hateful, racist lyrics.

Baron Cohen took the stage at the “March for Our Rights 3″ rally, held at Olympia’s Heritage Park, dressed in overalls and a fake beard. Then he began singing a catchy song whose lyrics included racist language and anti-Semitic conspiracy theories popular among far-right extremists.

Later, he sang, “CNN, they spread fake news, they controlled by you-know-whos — George Soros and his nasty friends.” (Soros, the billionaire Jewish philanthropist who funds a variety of liberal causes, is a favorite bogeyman of the right and conspiracy theorists in particular.)

Baron Cohen was honored last year by the Anti-Defamation League because of his record of using humor to fight hate, including through his Showtime series “Who is America?” which satirizes American politics.

“Baron Cohen has used humor and satire to expose people’s inherent biases by depicting racists, anti-Semites, neo-Nazis, Islamophobes and others as deeply flawed, ordinary people whose prejudices are, ultimately, laughable,” the organization said at the time. The group has more recently called attention to an explosion in negative tweets about Soros, which reached half a million a day last month.

TMZ reported that at some point the crowd turned on Baron Cohen, who was whisked into a waiting ambulance by his security and driven away.

Matt Marshall, a founder of the Washington Three Percenters, a far-right militia group that has previously organized gun rights rallies, said in a post on Facebook that Baron Cohen presented himself as the leader of a group that wanted to co-sponsor the rally. He said the actor paid for additional security, who then blocked attempts to pull him off the stage or cut power to his music. PJC