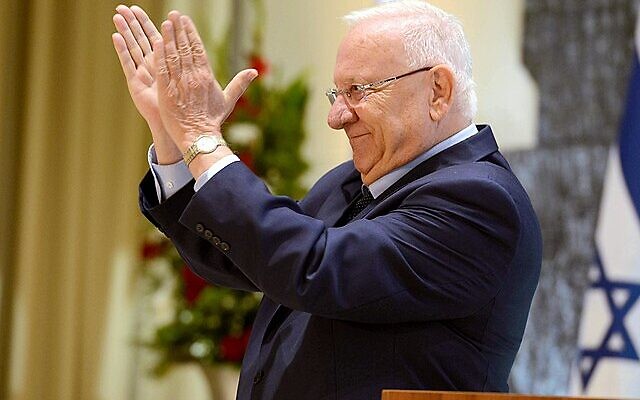 President of the State of Israel, Reuven Rivlin, at a ceremony honoring Service Year volunteers for the year of service for 5777. Thursday, July 27, 2017. Photo Credit: Mark Neyman / GPO.

As Israel’s 10th president, Reuven Rivlin operated with a steady and comforting hand. So it is with sadness that we prepare for him to step down on July 7, as his seven-year term comes to an end. Avuncular and possessing a common touch, Rivlin put his limited presidential powers to good use in providing a compelling counterpoint to fellow Likud member Prime Minister Benjamin Netanyahu’s increasingly authoritarian rule. Rivlin, 81, was the right person for the job, and brought honor to his service.

Rivlin entered the presidency with strong right wing views, including advocacy for Israel retaining permanent control of Judea and Samaria. But once in office, he became the president of all Israelis.

“All Israelis” included Israel’s Arab minority, who Rivlin insisted should have the rights and advantages of Israeli Jews. “All Israelis” also included Israel’s Haredi Orthodox minority. Neither group joined the Zionist enterprise. Yet, for Rivlin the objective was to call on all Israelis to join together “to imagine their society less as a melting pot with a dominant identity and more as an inclusive partnership among its tribes,” wrote Brian Reeves of the Brookings Institution.

Rivlin also opposed the passage in 2018 of the Nation-State law, which some critics claimed discriminated against Israeli-Arabs, removed Arabic as an official language of Israel and effectively declared Israel as a state exclusively for Jews.

Despite the increasingly polarized political climate in Israel, Rivlin was careful to avoid conflict, and put country first. Thus, during the national trauma of four elections in two years, Israelis found comfort knowing that Rivlin remained a steady force who would keep the process moving and fair, and would exercise his limited but important authority with integrity.

Most recently, when Netanyahu failed to form a coalition and Rivlin turned to centrist leader Yair Lapid, Rivlin set into motion the formation of Israel’s current government, one as unlikely as Rivlin’s own presidency — where, in order to succeed, government leaders will have to suppress their individual ambitions and work together for the sake of their country.

We are optimistic that Rivlin’s successor, Isaac Herzog, will continue in his altruistic path. Having served most recently as chairman of the Jewish Agency for Israel, and before that as the leader of the country’s Labor party, Herzog brings strong political savvy and experience and a deep understanding of world Jewry to his new job. He also has “royal” Israeli pedigree, as the son of two-term President Chaim Herzog and the grandson of a revered chief rabbi of Israel.

Notwithstanding the deep family and political history on which Herzog might draw to inform his term in office, he need look no further than his predecessor for the model of an Israeli president who fulfilled his responsibilities with honor and dignity, and extended a warm embrace to the people of Israel and Jews around the world.

We will miss Reuven Rivlin, even as we embrace Isaac Herzog. Israel’s presidency has been and will remain in good hands. PJC