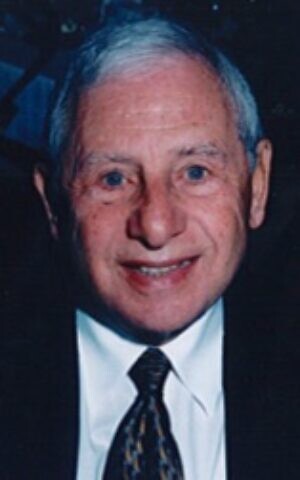 SILVERMAN: Ralph Silverman, on Tuesday, March 1, 2022. Dearly beloved husband of 67 years to Audrey J. Silverman; loving father of Dr. Stuart L. Silverman (Patty Evans), and Ellen and Bob Garvin. Ralph was the adored Poppop of Franki (Aaron) Zimmerman, Michael (Dr. Leslie) Garvin, Emily (Tyler) VanderValk, and Gayle Garvin. He was the doting and adored great-grandfather of Ella Jean Zimmerman. Ralph was the brother of the late Martin (late Louise) Silverman. He was the uncle of Dr. Edwin (Diane) Silverman and the late Randi Silverman. Ralph was a proud veteran of World War II, serving in the U.S. Army as a combat engineer in the 104th Timberwolf Division in the European Theatre. Ralph was the co-owner of Carload Furniture for over 30 years. He mostly enjoyed spending time with his family. Ralph was the sweetest and most devoted husband, father, grandfather, great-grandfather, uncle and friend. He will be greatly missed by all. Graveside service and interment will be held on Friday, March 4, 2022, at 11 a.m. at Homewood Cemetery, Star of David section, 1599 S. Dallas Avenue, Squirrel Hill. Contributions may be sent in his memory to Congregation Beth Shalom, 5915 Beacon Street, Pittsburgh, PA 15217 or a charity of donor’s choice. Arrangements entrusted to Ralph Schugar Chapel, Inc., family owned and operated. schugar.com PJC