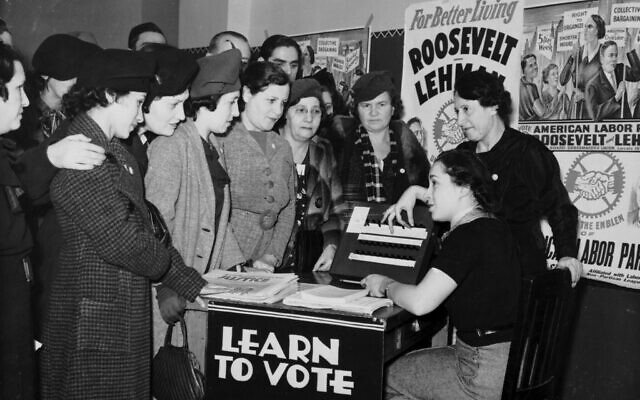 Women surrounded by posters in English and Yiddish supporting Franklin D. Roosevelt, Herbert H. Lehman, and the American Labor Party teach other women how to vote, 1935. This image is held in The Kheel Center for Labor-Management Documentation and Archives. www.ilr.cornell.edu/library/kheel. Image via Flickr

As March, and Women’s History Month, rolls along, several Pittsburghers are committed to preserving the stories of Pittsburgh’s Jewish women — virtually.

Now more than a quarter of a century old, the JWA has grown significantly from its 1997 origins.

The JWA’s website draws more than 2 million visitors per year who engage with the organization’s vast offerings, including an encyclopedia, public programs, podcast, blog and even a fellowship for Jewish teens.

Kranson, a member of the JWA’s academic advisory council, has been affiliated with the organization for more than a decade.

“Back when I was in graduate school, in 2004, the JWA gave me a research fellowship to support a project I was researching about the Jewish women who ran hotels in the Catskills,” Kranson said.

Thanks to the JWA, in 2005, Kranson presented her findings during a talk titled, “Staging the Ideal Jewish Community: Women Hotel Owners in the Catskills, 1950-1970” at the Annual History of the Catskills Conference, a program co-sponsored by the Catskills Institute and the JWA.

Later, in 2007, the JWA co-sponsored a conference Kranson co-organized which focused on American Jewish Women in the mid-20th century.

“Because of the research generated during that conference, I went on to co-edit ‘A Jewish Feminine Mystique?: Jewish Women in Postwar America.’ That volume was a finalist for a National Jewish Book Award in Women’s Studies,” Kranson said.

Last year, Kranson joined three other Jewish women’s history scholars to teach an online history course through the JWA. In the course, which was dedicated to “The Hidden History of Jews and Reproductive Rights in America,” Kranson discussed “Jews and the politics of abortion after Roe v. Wade.”

Berg’s relationship to the JWA stems mostly from its Shalvi/Hyman Encyclopedia of Jewish Women, first published in 1997 as “Jewish Women in America: An Historical Encyclopedia.”

In 2009, the JWA published the collection online.

Since then, the JWA has continued expanding the encyclopedia. With thousands of entries, the encyclopedia has more than 1 million users worldwide each year, editor Jennifer Sartori and JWA CEO Judith Rosenbaum noted in 2001.

Berg said her entry on Freehof grew out of a shorter biography she wrote for the 2016 self-published work, “Her Deeds Sing Her Praises: Profiles of Pittsburgh Jewish Women.”

“When the Jewish Women's Encyclopedia was planning its recent expansion, they wanted to include more about Jewish women who had worked with disability communities,” Berg said.

The JWA asked Berg to develop the Freehof entry and include more “emphasis on Lillian's work with Braille books,” Berg said.

The entry on Freehof is just one of several that showcase Pittsburgh’s accomplished Jewish women, as Bertha Floersheim Rauh, Luba Robin Goldsmith and Elaine Lobl Konigsburg are all included in the encyclopedia, Berg added.

Squirrel Hill resident Ruth Reidbord drafted the Konigsburg entry, as it was “important to have Elaine recognized,” Reidbord said.

Konigsburg was a Carnegie Mellon University graduate, writer and illustrator. She also won the Newbery Medal, a literary award, twice.

Through its encyclopedia and other offerings, the JWA has helped countless users understand the “history of the Jewish people,” Kranson said.

The JWA’s encyclopedia, Berg said, has been one of her “go-to reference resources for women's history for more than 10 years.”

“The JWA helped establish Jewish women’s history as an integral component of Jewish studies, not only within the academy but also for the general public,” Kranson said. “This paved the way for a new generation of scholars — myself included — who could take it for granted that their research on Jewish women would find an interested and engaged audience. I could not have become the scholar I am today without the Jewish Women’s Archive. I consider it an enormous honor to be able to contribute to a resource that has offered me so much. I continue to use the JWA in my own research and teaching, and intend to do so for the rest of my career.” PJC