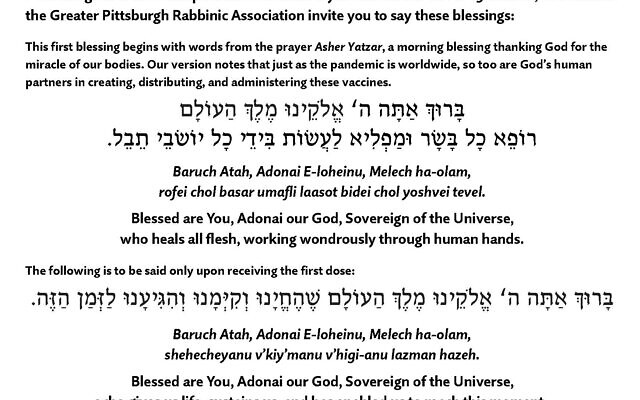 In an oft-repeated midrash, a woodcutter ventures into the forest alone during the High Holidays to pray. Unsure of the words, he instead recites the alphabet, asking God to combine them in the right order.

The Greater Pittsburgh Rabbinical Association wants to make sure the local Jewish community does have the right words to recite when its members are vaccinated against COVID-19, and Rabbi Barbara Symons of Temple David and Rabbi Doris Dyen of the independent havurah Makom HaLev have created a new blessing specifically for the occasion.

The duo, who were aided in creating the blessing by other members of the GPRA, worked quickly so that the blessing would be ready before most members of Pittsburgh’s Jewish community began receiving the vaccine.

The blessing, explained Symons, elevates the moment of vaccination and makes it sacred.

“We could have simply made a statement and said, ‘Go,’” Symons said. “Judaism teaches over and over to choose life, that the highest mitzvah is to save a life. This is taking it another step and making this moment sacred.”

The blessing will help people understand they are stepping into the field of holiness while being vaccinated, Dyen added.

The blessing follows a traditional formula, said Symons, and is introduced in promotional materials by a short narrative framing the moment and reinforcing the Jewish ideal to protect life. The introduction explains that the blessing begins with words from “Asher Yatzar,” a morning blessing thanking God for the miracle of our bodies, and also notes that, like the virus, God’s human partners are worldwide, working to create, distribute and administer the vaccine.

After the traditional opening, the blessing states, “…who heals all flesh, working wondrously through human hands.”

That wording is deliberate, Symons explained: “God created our bodies in a self-healing way. I brought to the conversation that the vaccine was created by sort of mimicking the virus and having our bodies work on that. God got our bodies to work and do this.”

“It makes it specific to this activity of getting the vaccine and recognizes that this has actually been a worldwide effort,” she said. “ There are people all over the globe attempting to find vaccines that will be effective that people can take without fear of side effects. It’s people in the U.S., in Europe, and Asia. Just as the virus is a pandemic, so are the attempts to bring multiple vaccines.”

Bidei chol yoshvie tevel, literally translates as “through the hands of all dwellers of earth,” said Dyen, noting that those words are included in the Reconstructionist siddur at the end of Kaddish.

“We specifically wanted to say we’re God’s human partners in creating, distributing and administering these vaccines,” Symons said. “It’s through the remarkable gifts of being a human, given by God, that even allows us to create this.”

“God works through all of us,” Dyen said, “to help repair the world and continue to give us all life.”

The rabbis also decided that upon receiving the vaccination for the first time — the Pfizer vaccine requires two doses — both the new blessing and the shehecheyanu should be recited.

Traditionally, the shehecheyanu is recited after doing something for the first time, or after a long period of not doing something, so the rabbis felt it would be appropriate to recite after receiving the first dose of the new vaccine.

The GPRA is primarily comprised of rabbis and cantors who are non-Orthodox. There is, however, usually at least one Orthodox rabbi joining colleagues from the Conservative, Reconstructionist and Reform movements in the organization. The group includes pulpit rabbis, rabbis and cantors working with various social service agencies, as well as those, like Dyen, who serve in a pastoral role at medical facilities.

“We have a couple of different kippot on,” Dyen said. PJC