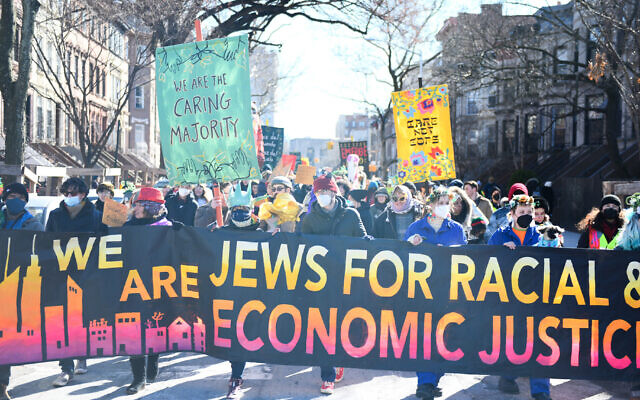 Progressive activist group Jews For Racial and Economic Justice are demanding an apology from the Anti Defamation League in a letter signed by multiple Jewish politicians and leaders on Monday. (Photo credit: Gili Getz)

In a letter circulated by JFREJ, the signatories condemned “smear campaigns that seemed designed to isolate and divide progressive Jews from the rest of the Jewish community.”

The letter is addressed to Jonathan Greenblatt, the ADL’s CEO, who last week appeared to endorse a Twitter thread from Brian Robinson, a long-shot Congressional candidate in New York, describing JFREJ as a “pro-dystopian organization” that only “pretends to be liberal and pro-Jewish.”

The letter from JFREJ describes the tweets and Greenblatt’s thumbs-up as part of a “dangerous history of isolating progressive Jews from the rest of the community by attempting to strip them of their Jewishness.”

The letter asks that Greenblatt and the ADL “condemn Robinson’s attacks on JFREJ and publicly apologize for affirming them.” The signatories also requested a meeting with the ADL.

Commenting on Greenblatt’s original endorsement of the Twitter thread, an ADL spokesperson told the New York Jewish Week that the CEO’s only intention was to suggest “how out of touch they [JFREJ] are with the majority of the Jewish community.”

JFREJ focuses almost exclusively on domestic issues from a left-wing Jewish perspective, including support for workers’ rights, LGBTQ rights and abortion access. Its electoral affiliate, The Jewish Vote, endorses candidates it describes as “progressive champions, socialists and reformers,” including candidates who have sometimes clashed with centrist and right-wing Jewish groups, especially over Israel.

Officially non-partisan, the ADL has faced criticism from the right for its focus on monitoring far-right extremism and endorsing many of the goals of the Black Lives Matter movement. Many on the left have criticized the group, meanwhile, for its solid support for Israel and for labelling certain forms of anti-Israel rhetoric as antisemitic.