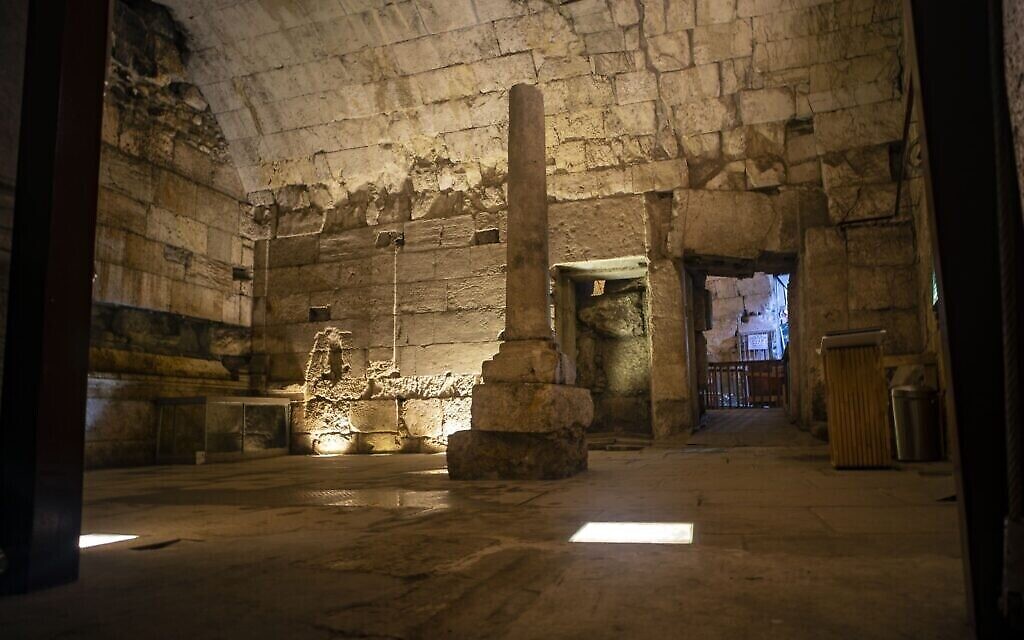 Remains of the magnificent 2000-year-old building recently excavated and due to be opened to the public as part of the Western Wall Tunnels Tour in Jerusalem's Old City. (Photo by Yaniv Berman/Israel Antiquities Authority via The Times of Israel)

Israel Antiquities Authority archaeologists have unearthed what may have been a 2,000-year-old city council building — a few hundred meters from its modern counterpart — during continuing excavations under Jerusalem’s Old City.

The grand structure is a new feature on the revamped Western Wall Tunnels Tour, which allows tourists to visit the millennia-old city that exists in a time warp under today’s thriving capital.

“This is, without doubt, one of the most magnificent public buildings from the Second Temple period that has ever been uncovered outside the Temple Mount walls in Jerusalem,” said excavation director Dr. Shlomit Weksler-Bdolach in an IAA press release on Thursday.

Built circa 20 CE, the Roman-era structure stood off a main drag leading to the Temple Mount and was used as a triclinium, or dining room, for notable members of society on their way to worship, according to the IAA release. Originally constructed with an ornate water fountain and decorative Corinthian capitals, the striking edifice underwent a series of structural changes in its 50 years of use prior to the 70 CE destruction of the Second Temple, Weksler-Bdolach told The Times of Israel.

The massive structure will soon be open to the public as part of the Western Wall Tunnels Tour, which has been rejigged to create different paths and experiences, based on several new routes that cut through thousands of years of history, through today’s modern use of part of the tunnels as prayer and event halls.

According to Weksler-Bdolach, originally archaeologists had thought the “city hall” was constructed during the earlier Hasmonean period. Located to the west of Wilson’s Arch, just off the prayer pavilion for men at the Western Wall, one of the chambers was discovered and documented in the 19th century by Charles Warren. Other archaeologists also studied the room in the 20th century.

However, after taking up some of the ancient flooring and performing carbon-14 dating on organic materials from the building’s base, as well as discovering coins and pottery sherds, archaeologists place the opulent building’s timeframe at no earlier than 20 CE. She noted that because the site is only partially excavated — to preserve other important subterranean structures from other eras — it is more challenging to precisely date and study it. “Every building is important; we cannot take all the buildings apart,” she said.

What archaeologists do know is that during its 50 years of occupation, said Weksler-Bdolach, the large public structure was separated into three different spaces, the fountain was taken out of use, and what appears to be a ritual bath or mikveh was added, just prior to the destruction of Jerusalem. 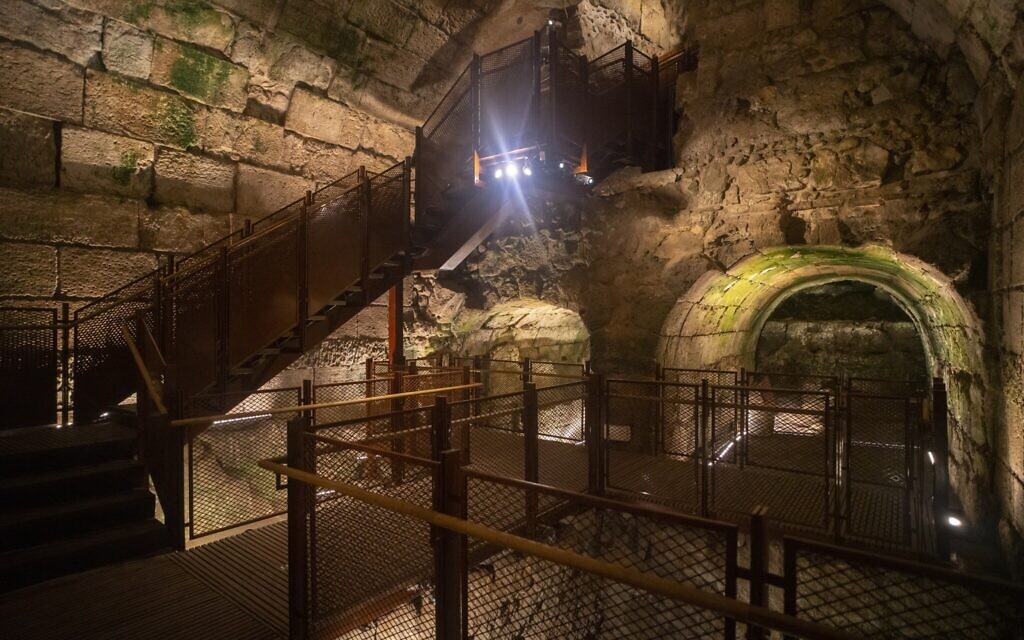 The new visitors’ route in the Western Wall Tunnels. (Photo by Yaniv Berman/Israel Antiquities Authority via The Times of Israel)

Despite the clear Roman influence in the structure’s architecture, Jerusalem at this time was still a culturally Jewish city, said Weksler-Bdolach. The decorations discovered in the spaces — a sculpted cornice bearing pilasters (flat supporting pillars) — didn’t include graven images, banned by the Torah.

She said the hall was likely used by city, versus Temple, officials who wanted to impress their guests.

“Visitors to the site can now envisage the opulence of the place: the two side chambers served as ornate reception rooms and between them was a magnificent fountain with water gushing out from lead pipes incorporated in the midst of the Corinthian capitals protruding from the wall,” said Weksler-Bdolach in the press release.

There are still several puzzles to work out surrounding the building. For one, what was the water source for the fountain? Weksler-Bdolach laughed and said that is the “million-dollar question,” but the researchers’ working hypothesis is that since clean, freshwater would likely have been used, it was hand filled through an intricate system of lead water piping. The fountain, she said, was likely only used to make a splash with especially important VIPs.

“In Jerusalem there are several cities under the city,” said Weksler-Bdolach, “especially under the Old City.”

According to Shachar Puni, architect for the Israel Antiquities Authority’s Conservation Department, one of the interesting and unique features of ancient Jerusalem is that many whole sections were left completely intact under the ground.

In most cases, new construction was performed on top of older structures, he, said, with domed ceilings serving as building bases, and still intact chambers underneath used as basements or cisterns, or even hideaway living spaces.

Now, with the rerouted paths, said Puni, visitors can experience different elements, time periods, and purposes of the underground city. For example, tourists purely interested in the ancient archaeology will no longer brush up against today’s prayer halls — and vice versa.

Mordechai Soli Eliav, chairman of the Western Wall Heritage Foundation, says, “It is exciting to reveal such a magnificent structure from the Second Temple period while we mourn the destruction of Jerusalem and pray for its restoration.” The new section of the Tunnels Tour should be open by the Hebrew month of Elul, just ahead of Rosh Hashana, in time for traditional selichot, or penitential prayers.

“What’s fantastic is that there’s a living city moving about aboveground, and in parallel, a whole world that was frozen, but still lives, in the archaeological realm, one under the other,” said Puni. PJC