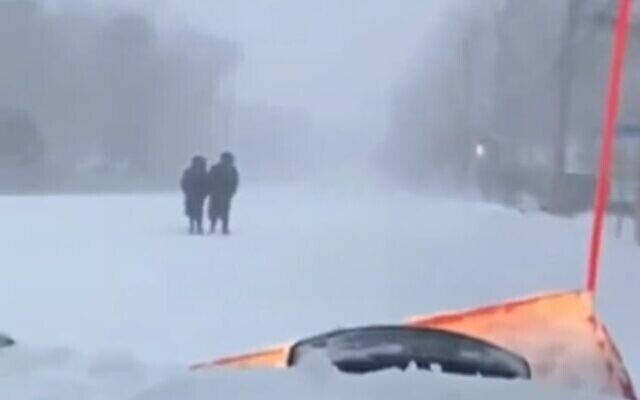 Video footage captured the moment two Orthodox Jewish men were blasted by New Jersey snowplow driver Donny Klarmann as the pair were walking to a religious service on Saturday. (Screenshot)

A New Jersey snow plow operator was fired on Saturday after a video showed him allegedly spraying two ultra-Orthodox men while they were on their way to Shabbat service.

In a video recorded by his coworker and posted to Facebook, former Waste Management employee Donny Klarmann and his colleague can be heard laughing while the two religious men are pelted with snow and ice in the middle of a storm in Lakewood, New Jersey.

The caption to the video on his Facebook page, which has since been removed, said “This one’s for you JC.”

In addition to being fired from his job, Klarmann is also being sued by the two Jewish men for a hate crime.

Lakewood police and the Ocean County Prosecutor’s office have also opened an investigation into the incident.

In an official statement, Waste Management said that they are “aware of an incident that was posted by an off-duty Waste Management employee to his personal social media account. The hateful conduct depicted in this video is unacceptable.”

Lakewood Mayor Raymond Coles also noted that the two men could have suffered serious injuries from the flying snow and ice.

“I was appalled and shaken when I saw this video. Not only was it cruel but it was also incredibly stupid and dangerous,” Coles said in a statement.

“The plow could easily have thrown chunks of ice or rock and seriously injured or killed either of the victims. I am glad to know our police department is investigating all aspects of this incident.” PJC