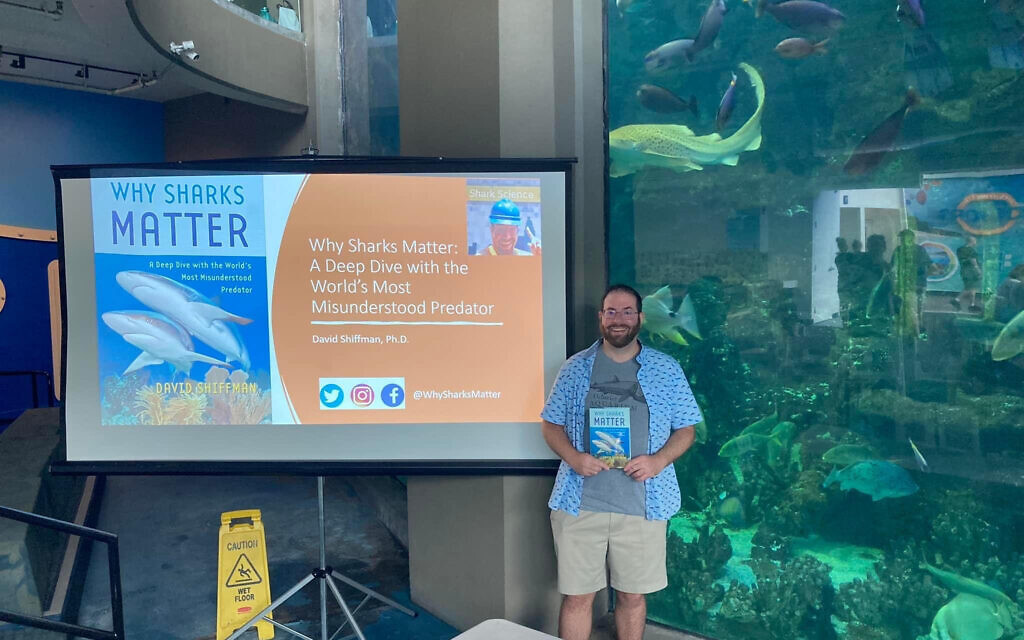 David Shiffman can trace his love of marine biology back to a few early memories. The first shark he ever saw was at the Pittsburgh Zoo, and the first time he ever saw the ocean was when he visited his retired grandparents in Florida.

But part of his fascination with the field might have been spurred while practicing for his bar mitzvah at Temple Emanuel of South Hills.

“My rabbi, who at the time was Mark Mahler, had a fish tank in his office, and we geeked out about fish all of the time when I was doing bar mitzvah prep,” Shiffman recalled. “It always cracked me up that my haftarah portion at the time was Ezekiel, so I had a fish at my house named Ezekiel, and Mahler had a piranha in his office named Killer. But he was the rabbi, and I was the kid.”

More than two decades after raising Ezekiel, Shiffman –– who now lives in the Washington, D.C. area –– has turned his biology credentials into a new book with “Why Sharks Matter.”

The book had percolated for nearly 10 years.

“I find that there are a lot of people who ask really great questions, and sometimes they say, ‘I really enjoyed this topic, I would like to learn more about the kind of work you do. Is there an accessible, not textbook, not law school book that can tell me about shark conservation science and policy?’ And until two weeks ago, the answer was no,” Shiffman explained.

“Why Sharks Matter” takes Shiffman’s experience from working at Arizona State University and his lifelong shark obsession and argues that our cultural understanding of sharks is, at best, misinformed.

“My neighbors in Pittsburgh are afraid of sharks, and they don’t live anywhere near them,” he said. “This is not something they need to worry about in their day-to-day lives, and it’s so over-exaggerated by inflammatory media coverage.”

But the goal of “Why Sharks Matter” isn’t just a course correction of the idea that sharks are a threat to humans. Shiffman also wants readers to know about the present-day threats to sharks and what people can do to help counter them. The book’s final chapter is simply titled “How Can You Help Sharks? (Dos and Please Just Don’ts).”

Last weekend, Shiffman returned to Pittsburgh to kick off the book tour for “Why Sharks Matter” at the Pittsburgh Zoo. He said that part of his love for the ocean surprisingly stemmed from the fact that he was raised around Pittsburgh.

“I actually know a lot of marine biologists who are from Midwest areas, and we’ve talked about it,” Shiffman said. “There’s something about the ocean in your imagination. When you don’t see it as everyday growing up, it’s just extra-special and magical, and you want to get there. Then you see it, and it lives up to the hype.”

Shiffman previously wrote about how his Jewish upbringing informs his environmental conservation philosophy in an article for the website Southern Fried Science. But beyond themes of tikkun olam and bal taschit, Shiffman shared that his faith helps with optimism.

“Despite constant bad news about the environment, the hope that it will get better if we just work hard enough … that there’s a light at the end of the tunnel and all of those clichés, a lot of that comes from my faith,” he said. “I have a lot of environmental scientist friends, and we talk a lot about, like, ‘Are you hopeful? Man, this is so bad,’ and I gotta be hopeful. If we’re not, then why try?”