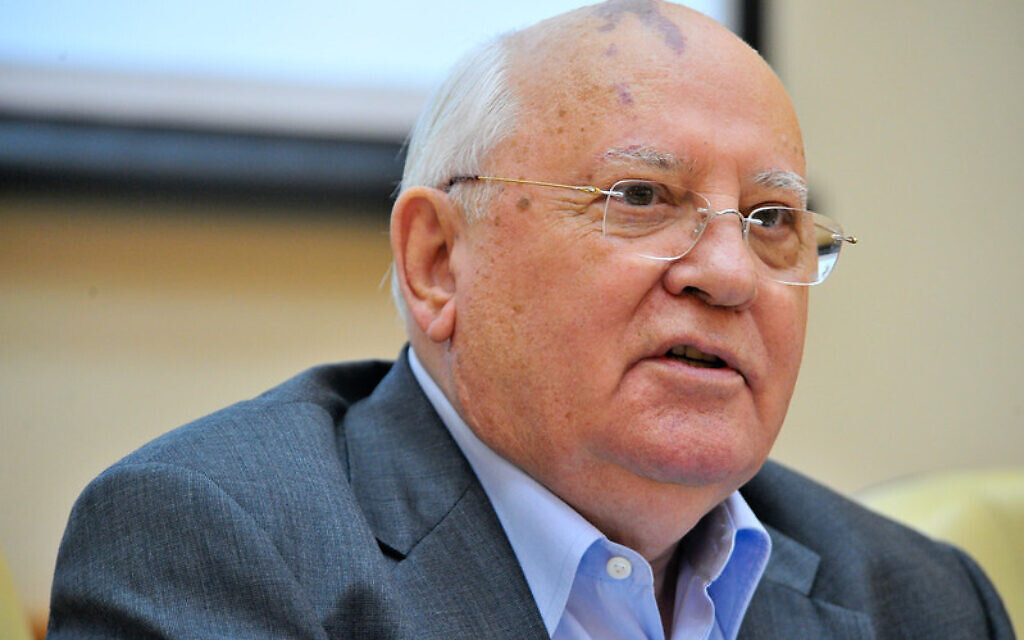 I have a confession to make. For a long time, the Conference of European Rabbis knew without a doubt that we should give President Mikhail Gorbachev our most prestigious prize.

We have awarded European statesmen who support Jewish life in Europe with our HaRav Lord Jakobovits Prize, and the politician who most deserved this prize was, without question, the last Soviet leader.

It was President Mikhail Gorbachev who opened the gates of the Iron Curtain and allowed Jews to emigrate to Israel and to other countries. It was he who allowed Jews again to lead a Jewish life, study Hebrew, go to synagogue and be openly Jewish within the Soviet Union for the first time in decades.

So why didn’t we give Mikhail Gorbachev this most well-deserved award? We didn’t want to enrage the Kremlin, whose current leader has described the demise of the Soviet Union as “the greatest geopolitical catastrophe of the 20th century.”

It was under Gorbachev that my wife Dara and I arrived in the Soviet Union in 1989 to restart the Jewish community in Russia, which has subsequently been destroyed by the Soviet regime. We built kindergartens, schools and synagogues, starting during the Gorbachev years and later after the putsch (a failed coup in August 1991), when the Soviet Union fell apart and the new
Russian state was born under President Boris Yeltsin.

The last time I went to visit Gorbachev was in 1996, before the presidential elections in Russia. He asked me: “Should I run?” I jokingly answered him: “Yes — in Israel. There, you are very popular!”

When I told the story weeks later to acting Prime Minister Shimon Peres (after the traumatic assassination of Yitzhak Rabin), he thought I was being serious. Facing a tough election of his own, he said, “We have enough candidates in Israel already!”

While Gorbachev remained very popular throughout the years among Soviet Jews and in Israel, he had very little public support within Russia itself. The horrendous economic difficulties which befell the greater part of the Soviet population during and after Soviet collapse, the withdrawal of the Soviet safety net, the product shortages, and the shame felt by many Soviet citizens about the disintegration of the system they have been made to believe in for so long, all contributed to this.

These are the very feelings that the current government has used as an excuse to launch its latest invasion into Ukraine in order to recreate the lost dream of the Soviet Empire. But the notion that these feelings are shared by the majority of Russian citizens today is totally false: they are mainly expressed by members of the elite organs which ruled the Soviet Union, such as the KGB.

If there were actual broad public support for this brutal invasion, there would have been no need for the draconian shutdown of all independent journalism and social media within Russia, not to mention the arrest and repression of tens of thousands who oppose the war.

It is only through censorship, repression and propaganda that the current regime maintains its power. Mikhail Gorbachev deserves honor and accolades from all people — not only the West, and not only Jews, but from every citizen of the former Soviet Union for bringing down one of the most repressive totalitarian and stupid regimes, which enslaved a big part of humanity.

It is bitterly ironic that his death comes at a time when the freedoms he sought to institute are being snatched away from the Russian people once again. May his memory be a blessing. PJC

Rabbi Pinchas Goldschmidt served as Chief Rabbi of Moscow from 1993 to 2022 and is president of the Conference of European Rabbis. This piece first appeared in the Forward.