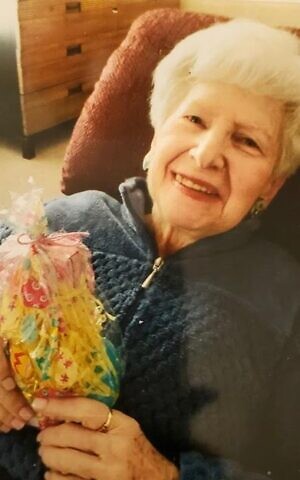 REBB: Marlene Blumenthal Rebb. She was born July 8, 1934, to Alex and Sarah Blumenthal in Pittsburgh. Marlene‘s older sister was Reva and a couple years later sister Ann was born. Marlene graduated Peabody High School. When her mother passed, Alex remarried Esther Patz. From early on she found that education interested her. She went to the University of Pittsburgh and majored in business administration. Her first job was at the Burroughs Corp teaching teachers and bookkeepers. Marlene married Charles Landay. Marlene left the business world to become a mother to Steven. From there she earned her teachers’ degree from the University of Pittsburgh, becoming a member of Alpha Delta Kappa sorority. Marlene enjoyed four decades of teaching at Pittsburgh’s high schools. Her passion was educating and her students. In 1971 life changed again, marrying George Rebb and becoming mother to his four teenagers. Marlene and George so enjoyed spending time with their extended family and friends while traveling locally and abroad. Marlene always volunteered, including working the polls, the Monroeville Mall Ministry, synagogue, and importantly with Oasis/Literacy Pittsburgh. A devoted wife, she cared for George as his health waned. Marlene is survived by her sister Ann Stone, stepbrothers Steven and Stuart Patz, children Steven Landay, Robert (Cheryl) Rebb, Mindy Johnson, Jerry (Pat) Rebb, and Mark (Bonnie) Rebb, 11 grandchildren, six great-grandchildren and countless cousins, nieces, nephews and extended family. Graveside service and interment will be held on Thursday at 3 p.m. at Adath Jeshurun Cemetery. In lieu of flowers, contributions in her memory may be made to Jacksonville Hospice at promedicahospice.org, or literacypittsburgh.org.
“BYE FOR NOW”
Arrangements entrusted to Ralph Schugar Chapel, Inc., family owned and operated. schugar.com PJC