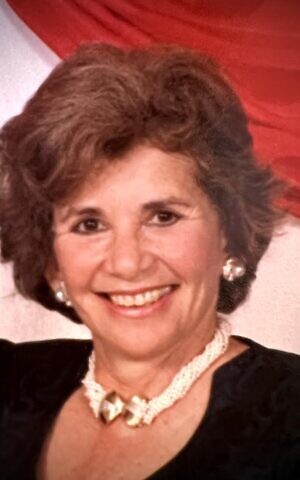 HESS: Marianne Fisher Hess of Palm Beach and formerly New Castle, Pennsylvania, passed away at home on Saturday, March 12, 2022, at the age of 89 after an extended illness. She is survived by her adoring husband of 66 years, Marshall Hess ,and their three children: Carolyn Hess Abraham (Jay Apt), Andy Hess, and Dan Hess (Lori), and beloved grandchildren Geoff Abraham (Morgan), Ted Abraham (Erica,) Alex Abraham (Amy), Leah Hess, Wallis Hess and Max Hess, and great-granddaughter Harper Abraham, along with many dear cousins and extended family. Marianne was an entrepreneur, a teacher, a lover of art and travel, and a compassionate and caring friend to many who will miss her.
Marianne was born in Erie Pennsylvania and grew up New Castle, the daughter of Edward and Fay Fisher. She graduated from New Castle High School and Connecticut College, where she earned a BA in economics. After college she moved to New York where she joined the executive training program at Hanover Bank. During her career, she worked as a social worker, a high school teacher and community volunteer. Marianne was a successful community leader and entrepreneur. She saw the need for a travel agency in New Castle and co-founded North City Travel. She also co-founded the New Castle chapter of the League of Women Voters and served as a volunteer in many community organizations.
Marianne’s happiest times were spent with her family and roaming art galleries and traveling. She loved European history, playing bridge, and her family and friends who adored her. Marianne traveled the world and was an expert on culture and art. However, she always stayed true to her small-town values and ethics. She was extremely charitable; woman’s issues and equality were among her most passionate causes. Marianne was a friend to many — quick to smile and laugh. She will be missed dearly.
A private memorial service will take place on Tuesday, March 15. In lieu of flowers, memorial donations may be made to Planned Parenthood, The Marianne Fisher Hess Endowed Scholarship Fund at Pittsburgh Jewish Federation, or a charity of choice. PJC