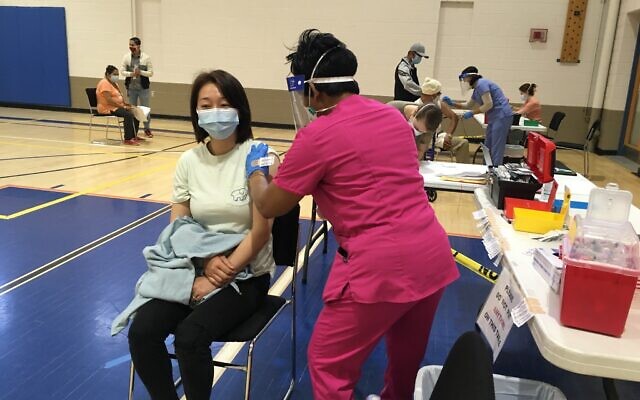 Lines have stretched down Darlington Road in Squirrel Hill for months. The sight has become routine: queued parties, some with paperwork in hand, patiently awaiting entrance into the Jewish Community Center’s Robinson Building. Inside, staff from the Squirrel Hill Health Center are tending to individuals, processing biographical information and administering jabs.

The gatherings began December 29, 2020. As of April 8, 2021, the Jewish Community Center of Greater Pittsburgh has hosted 19 clinics between its Squirrel Hill and South Hills branches, resulting in 4,730 people getting vaccinated against COVID-19.

Leaders from the JCC and the Squirrel Hill Health Center explained that the joint efforts reflect a mutual commitment to community members’ vitality.

“We could not be more pleased, more humbled, more honored, about the partnership, about our role in promoting and supporting public health,” he said. 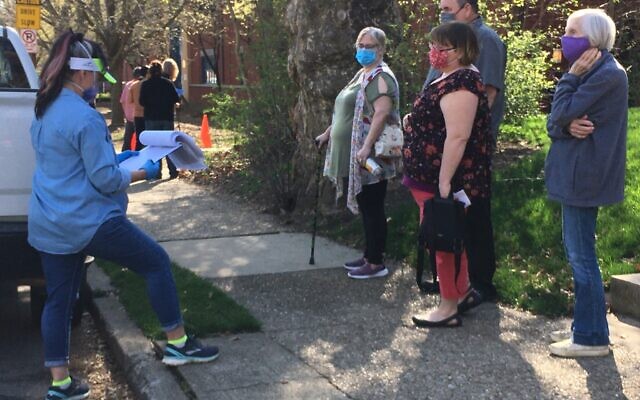 With Pennsylvania set to open vaccination eligibility to everyone 16 and older on April 19, both the JCC and the Squirrel Hill Health Center are preparing for increased activity.

During the first few months of 2021, vaccination supply was “very uncertain” and the Squirrel Hill Health Center lacked the capacity to vaccinate large numbers of people, according to Friedberg Kalson. “That has all changed in recent weeks.”

Other changes relate to the vaccine itself.

Until now, the Squirrel Hill Health Center received the Moderna vaccine exclusively from the commonwealth. As a federally qualified health center, however, the Center will be eligible to receive additional doses directly from the federal government, and there’s a possibility the supply may include the Johnson & Johnson vaccine, said Friedberg Kalson.

The JCC is boosting its efforts as well. In addition to working with the Squirrel Hill Health Center, the JCC is offering additional clinics at its Squirrel Hill site in collaboration with both Allegheny Health Network and UPMC.

On April 15, the JCC and Allegheny Health Network will be partnering on a clinic for Greenfield, Hazelwood, Wilkinsburg, Oakland and East Liberty residents, and are preparing to distribute up to 1,500 Johnson & Johnson vaccines during that event, said Kunzman.

In recent days the Jewish Community Center, through its Center for Loving Kindness, has reached out to 79 community-based organizations within those five neighborhoods. Feedback from those efforts has given JCC leadership reason to believe the April 15 event will be well-attended, said Kunzman. 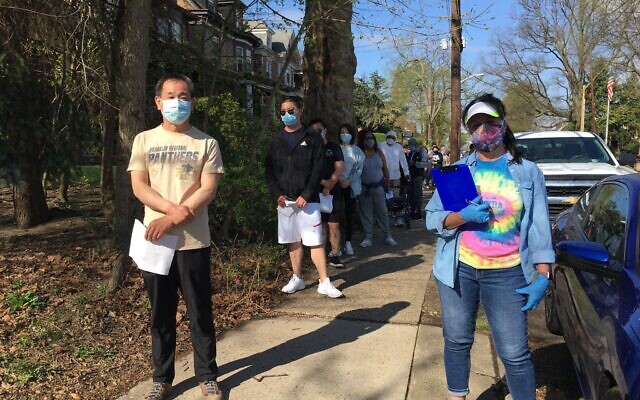 Prior to both the April 15 and April 18 clinics, the JCC has strived to reduce barriers to vaccination, said Kunzman, including adjusting event hours to accommodate work schedules and addressing cultural needs.

Those actions, as well as partnering with local entities and working to bolster residents’ health, are central to the JCC’s’s mission and history, explained Brian Schreiber, the organization’s president and CEO.

In November of that year, the Jewish Criterion, a precursor to the Pittsburgh Jewish Chronicle, reported that “nurses, and indeed all the workers, of the Irene Kaufmann Settlement have gone into hundreds of homes visited by disease and death and given help to the sick and cheer and comfort to the bereaved.”

“When you look at that history, and you look at what we’re trying to do today in so many ways, 100 years later the stories are very parallel,” said Schreiber.

While the past year has been challenging, it’s also been “a very special time,” he said.

“The past year has tested all of us,” she said. “It’s been enormously challenging. The silver lining in this is the partnerships and collaboration and the deep sense of community that we have with the JCC, as with other partners around the county.

Friedberg Kaslon credited the Jewish Federation of Greater Pittsburgh and the Jewish Healthcare Foundation with supporting the effort.

“We are all working together to put an end to this pandemic and vaccination is the way it will end,” Friedberg Kalson added. “I just encourage everybody to get vaccinated. Please, please, please — it is safe. It is what is going to allow us to be free of what we’ve all lived through.” PJC