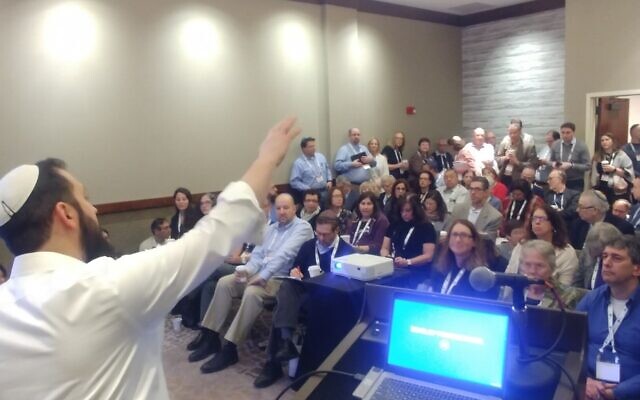 Zoom services, virtual minyans, Skyped shivas, empty synagogues and half-filled JCCs have been the hallmarks of Jewish communal life in the age of COVID-19.

But once the pandemic is behind us, will the practice of Judaism have been transformed fundamentally because of the changes and adaptations made during the course of the coronavirus crisis?

“I am always extremely optimistic about the long-term future of the Jewish people and I remain that way,” said Rabbi Danny Schiff, Jewish Community Foundation Scholar at the Jewish Federation of Greater Pittsburgh. He acknowledged, however, that the Jewish community is in a period of transition and can expect significant change that will, at times, be hard to manage.

There will be three immediate challenges facing the Jewish community, according to Schiff: the impact of the stress and psychological tension caused by the virus; the need for healing, including for families who have lost loved ones; and determining how institutions will move forward.

“Plainly, there are going to be some difficult impacts that will be long lasting,” he said.

Despite the ability to resume physical activities, Schiff, who has moved his adult education classes online, predicts some community members will wish to remain in the virtual space.

“And yet, we know that, historically speaking, it’s really important in terms of creating and sustaining community, for people to be physically present,” he said. “It’s not an accident that God spent half of the book of Exodus giving us detailed instructions on how to build a physical place with architectural instructions that will bring us into God’s presence.”

There is a need for the community to return to gathering in person as it did before COVID-19, he said.

“Humanity is demonstrated most powerfully and profoundly when we can put our arms around each other – at times of celebration, at times of consolation — and therefore, the physical presence, the architecture and the encounters are a critical part of building strong community.”

Rabbi Levi Langer of the Kollel Jewish Learning Center also has moved his educational programs online during the pandemic. Still, he noted, a large part of Jewish observance is personal experience.

“Judaism really has an immersive component to it,” Langer said. “Personal involvement cannot be replaced by a computer screen.”

Langer doesn’t fear for the future. He said the community is already anxious to get back to real-world Judaism.

“If we cannot get people inspired to get out of the house, then we are looking at a very serious situation in Judaism,” Langer said. “You have to inspire people to be excited.”

The Black Lives Matter movement is an example, he said. “People cared, so they went out there. They would have otherwise stayed at home. The real question is, how do you give people a sense that Judaism has meaning in their life? I think every house of worship and every Jewish institution has to think about inspiring Jews.”

Still, the online platforms have offered some benefits, said Danielle Kranjec, senior Jewish educator at Hillel Jewish University Center. She noted many of her students have been inspired by the move to virtual events.

“By leaning into the benefits and the particular characteristics of our online gatherings we’re actually seeing a strengthening of Jewish community,” she said.

One advantage is that the 18- to 24-year-olds who may have felt intimidated going to the Hillel building are now logging in for events like the weekly pre-Shabbat gatherings.

“Obviously, it’s different,” Kranjec acknowledged. “Learning about something like challah baking over Instagram Live, that’s a very different experience than doing it live in the Hillel building.”

Kranjec is confident, though, that in the post-pandemic world, the Jewish community will be able to effectively implement the lessons it learned while operating virtually, including providing greater accessibility and focusing on individual relationships.

Hebrew priestess Keshira haLev Fife agreed that increased accessibility will continue to be a priority post-pandemic.

“From a disability justice standpoint, from the standpoint of folks who might want their kids to experience Judaism on a Friday night and feed them dinner and make sure they get to bed at a reasonable hour, for folks with social anxiety, panic attacks and anything else that might be a barrier to entry, this has been a time when people are able to access Judaism more readily,” said Fife.

Conversations have begun taking place about what the new model of Jewish community will look like, allowing tradition to continue while maintaining a virtual community, added Fife, spiritual leader of Kesher Pittsburgh.

Some of the changes experienced by the Jewish community have been painful, admitted Rabbi Aaron Meyer of Temple Emanuel of South Hills. But he said, “ultimately our Jewish tradition serves Jews, Jews don’t serve Jewish tradition.”

One of the advantages of the pandemic, Meyer noted, has been the loss of geographical borders, allowing people from around the globe to connect online.

“I’m never going to turn my back on them again,” he said.

There are many more unaffiliated than affiliated Jews in the South Hills, Meyer said, and the virtual tools now available allow them an easy opportunity to join the Jewish community.

Of course, virtual opportunities still come at a cost, and for much of the pandemic, congregations and other Jewish institutions have been shouldering those costs while offering learning opportunities and services for free.

“There’s going to be a reckoning coming to the Jewish world,” Meyer said. “The financial crisis of 2008 saw the Union of Reform Judaism congregations lose 20% of their membership who never came back. I don’t think it’s because they don’t value Judaism. I believe our financial model is broken. At some point we have to pull the Band-Aid off and have the hard conversations.”

Rabbi Yaier Lehrer, spiritual leader of Adat Shalom Synagogue, is confident members will continue to support Jewish institutions as long as they are offered something meaningful.

“They won’t support them just because they always have,” he said, “but they will if we offer them something of value.”
The pandemic has been an inflection point for congregations, proving the need to engage members where they feel comfortable, Lehrer explained. “We have to find our congregants where they are, even if it’s in the home. I mean with services, classes, Zoom book clubs.”

Despite the challenges, the Jewish community will learn positive lessons from the pandemic, stressed Rabbi Mendel Rosenblum of Chabad of the South Hills.

Rosenblum is confident that the Jewish people will come out stronger after the pandemic.

“I believe that there’s a deep yearning of the human spirit, the Jewish spirit, to connect with community,” he said. “I don’t think it’s possible for those other mediums to replace the in-person experience.”

Despite the uncertainty of the future, Schiff is certain of one thing: community is vital for the Jewish people.

“Why do we put so much emphasis on having a minyan?” Schiff queried. “Because we want to bring people together. It seems plain to me that as soon as we have the opportunity, that’s the preferred structure.” PJC