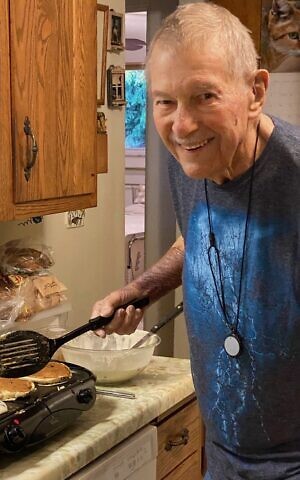 BERG: On March 8, Joel H. Berg passed away peacefully at home surrounded by family. He was predeceased by his wife of 48 years, Judith E. Berg, his parents, Benjamin and Regina Goldberg, and his sister Bernice Fargotstein. He was born in Pittsburgh and spent his entire life there. In December of 1952 he joined the army and for two years was stationed at Eniwetok Atoll where he participated in Operation Castle, the testing of the hydrogen bomb. After his time in the Army he
returned to Pittsburgh and worked as a salesman, eventually starting his own company, JBJ Trading, which he successfully operated for over 25 years. In his retirement he enjoyed the game of golf, even in his 80s, frequently playing over 160 rounds in a year. He also enjoyed working in his yard and spending time with his children, Stacey Berg (Mary Brandt), Mitchell Berg (Robbie Berg) and Rachel Berg (Colleen O’Brien). The family would like to thank Dr. Hongmei Liang, the team at the UPMC St. Margaret’s infusion center, and Stacey and Hal of the UPMC Family Hospice for their compassionate care. In lieu of flowers the family suggests donations to
Hospice or the charity of your choice. Calling hours will be Thursday 4 to 6 p.m. at the Hahn Funeral Home & Cremation Services, Inc. 123 North Avenue, Millvale. PJC