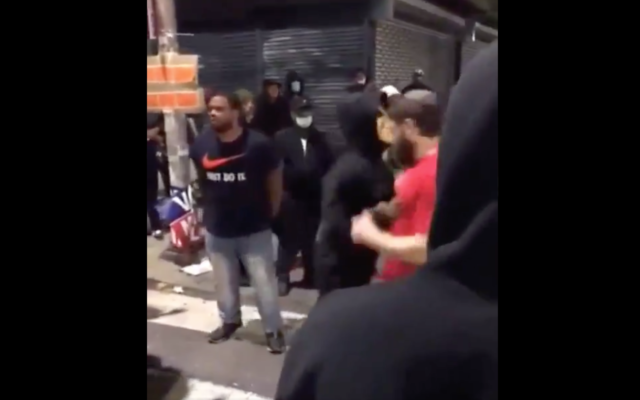 “Orthodox Jews violently attacked by mob @ BLM protest last night in Philly,” Yaacov Behrman, a community activist, tweeted on the morning of Oct. 28. “They told protesters they were there to show solidarity. Mob shouted anti Semitic & racist hate as they assaulted victims. Spoke to victim, says he feared for his life. This needs to be condemned by all!”

The video attached to Behrman’s tweet, which seems to have been originally posted on an Instagram account called HOI Philly, shows three Jewish men being berated during protests on 52nd Street in West Philadelphia. Behrman’s tweet of the video has been viewed more than 332,000 times as of Friday morning.

Orthodox Jews violently attacked by mob @ BLM protest last night in Philly. They told protesters they were there to show solidarity. Mob shouted anti Semitic & racist hate as they assaulted victims. Spoke to victim, says he feared for his life. This needs to be condemned by all! pic.twitter.com/oAY2kSaqM4

The video Behrman shared shows three men, two of them wearing kippot, being addressed by what appear to be protestors decrying the killing of Walter Wallace Jr. by two Philadelphia Police Department officers the day before.

“Y’all know we the real Jews, right?” one man yells at the small group.

“This ain’t y’all’s fight, y’all gotta go,” another man says, as one of the two men in kippot says that he and the other men he’s with are “just showing solidarity.”

One of the Jewish men gets shoved, and there are shouts of “Amalek,” “get ’em out of here” and “Revelation 2:9, synagogue of Satan,” an anti-Semitic invocation commonly cited by Black Hebrew Israelites, according to the Anti-Defamation League. Some in the crowd tried to defend the men.

One of the Jewish men in the video, a West Philadelphia resident who asked not to be named, was not there to “show solidarity,” a claim repeated in news outlets like the Daily Mail and NY Post. Rather, he said, the three Jewish men, who did not know each other prior to that night, attended out of simple curiosity.

In this case, he was just an observer, he said, though he added, “If you did do digging on the internet, you can see me at other rallies, where I have the biggest mouth. But that was not the case here.”

Though the West Philadelphia resident’s Twitter account shows he is not sympathetic to Black Lives Matter — he retweeted QAnon-affiliated Georgia House candidate Marjorie Taylor Greene calling BLM a terrorist organization — he pointed out that none of his political views were known to the onlookers who said anti-Semitic things to him.

“I didn’t bring my Twitter feed there to show off to everybody,” he said, noting that all the attackers knew was that there were three Jewish men in the crowd.

The confrontation took place after about four hours of walking alongside protestors, the West Philadelphia resident said, and the mention of solidarity was simply intended to de-escalate the situation.

But one of the other men with him, who also asked that his name be withheld, said he and his friend, the third Jewish man in the video, were sincere in their expressions of sympathy with the cause, even though they didn’t know much about it. The two yeshiva students from New Jersey were in Philadelphia for personal reasons, but, alerted to activity in the area where they were staying, decided to “show our respect” to the protestors and to the late Walter Wallace Jr. They had not been following the news closely, the man said.

As the students walked around, insults from people they identified as Black Hebrew Israelites started to pile up.

“Those little comments, we just brushed aside,” the man said. “We thought, ‘Obviously, there’s a lot of tension, there’s a lot of justifiable rage.’ So, you know, we didn’t think it was our place to shift the narrative to us.”

But soon, they had no choice but to pay attention, as the comments went from calling them “fake Jews” — another common BHI epithet — to outright questioning the men’s right to be at the protest.

“They like pointed at us and they said, ‘This is not your Holocaust, this is not Holocaust Remembrance Day, you people have no business being here,” the man recalled.

It was around this time that the confrontation seen on the video Behrman shared occurred. Though one unidentified man tried to support the Jewish men as they were being accosted, he was alone in his action.

“That, to me, was the most concerning part,” the yeshiva student said. “Nobody was intervening. Nobody. Nobody was saying anything. Nobody was saying that it’s wrong. And these were protesters who saw us there earlier and recognized that we were there for the cause, or alongside with them.”

He’ll think twice before joining another protest, he said, and would caution other visibly Jewish people to “steer clear of these type of events.”

The Philadelphia ADL has been investigating the incident and provided a new statement to the Jewish Exponent last night:

“The ADL has reviewed a longer video, which appears to be posted by members of the Black Hebrew Israelite movement,” wrote executive director Shira Goodman, via email. “The video shows the person filming, along with at least one other individual, harassing police officers before targeting a group of visibly Jewish bystanders. The clearly anti-Semitic attacks were unprovoked and at least one victim was shoved before seeking safety with nearby police officers. Anti-Semitism is unacceptable, and we will continue to be in contact with law enforcement on this issue.”

The Black Hebrew Israelites movement has a history of street harassment of Jews, women and white people. According to the ADL, the movement’s “core principles” include “the beliefs that white people are agents of Satan, Jews are liars and false worshipers of God, and Blacks are the true ‘chosen people.’” Though some Black Hebrew Israelites are not overtly racist or anti-Semitic, according to the Southern Poverty Law Center, there is “a rising extremist sector within the movement.”

The stabbing of five Orthodox in Jews in Monsey last Chanukah, which resulted in the death of one victim, was perpetrated by a man believed to be linked to Black Hebrew Israelism. And the perpetrators of the December 2019 attacks at a kosher market in Jersey City, where four people were killed, were also linked to the Black Hebrew Israelite movement.

The ADL’s fact sheet on the group notes: “It should be emphasized that the extremist and anti-Semitic sects of Black Hebrew Israelites are unrelated to the thousands of black Jews and other Jews of color in the US, who are genuine members of the Jewish faith. Furthermore, they should not be confused with Ethiopian Jews who mostly live in Israel today.” PJC

This story originally appeared in the Jewish Exponent, a publication affiliated with the Pittsburgh Jewish Chronicle.