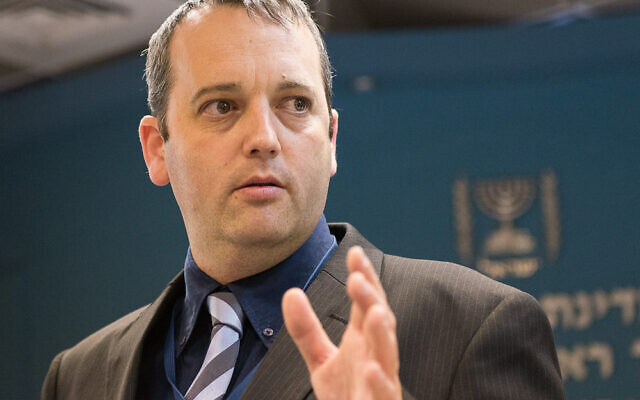 (JTA) — On Tuesday night, after Israeli TV stations broadcast the first exit polls from the country’s elections, a rabbi who had just won a seat in parliament tweeted out a traditional blessing of thanks, called the “Shehechiyanu.”

“Blessed are you, Hashem, our God, ruler of the universe, who has kept us alive and sustained us and brought us to this day,” wrote the rabbi, Gilad Kariv. “Thank you to all my partners on this long journey.”

Rabbis in parliament are far from an oddity in Israel, which sees multiple Orthodox parties serve in each term. But Kariv is not a member of any of those parties, nor is he quite like the rabbis who have sat before him in Israel’s legislative body, the Knesset.

When he is sworn in, Kariv will be the first Reform rabbi to ever serve in Knesset. The leader of the Israeli Reform movement and a longtime religious pluralism activist, Kariv has been running in Israeli elections over the span of almost nine years, but has never won until now.

Kariv has run for Knesset with the left-wing Labor Party multiple times, and in party primaries earlier this year, he won the fourth spot on Labor’s list in Tuesday’s election. That meant that if Labor got enough votes to enter Knesset, so would he. According to the nearly-complete tally of votes, Labor will have won seven seats, more than enough to earn Kariv a spot.

He plans to advocate for religious pluralism and work to counter haredi, or ultra-Orthodox, control over religious affairs in Israel. Labor’s new leader, Merav Michaeli, is an outspoken advocate for feminism and social equality in Israel.

“I’m ready to be more engaged in my other world of social impact, meaning the political work,” Kariv told the Jewish Telegraphic Agency during his campaign in an earlier round of elections a year and a half ago. “For us, the fact that equality isn’t a legislated constitutional value in Israel, that’s a disgrace. It’s a Jewish disgrace, not only a democratic disgrace.”

Kariv’s election comes amid a small resurgence of left-wing Zionist parties. Labor, Israel’s former governing party, was thought to be moribund before Michaeli revived it this year. Meretz, which is historically to Labor’s left, is also on track to grow its Knesset delegation. Taken together, the two parties will likely double the number of seats they hold in parliament.

While Reform Judaism is the largest Jewish denomination in the United States, it counts only a small percentage of Israeli Jews among its members and many Israelis are unfamiliar with what the movement believes and practices. And religious policies are generally not at the forefront of Israeli voters’ minds when they cast their ballots.

But this year, the status of Reform Jews in Israel — who are not recognized by the country’s Orthodox rabbinate — became a campaign issue. Earlier this month, Israel’s Supreme Court ruled that the state must grant citizenship to people who underwent Reform and Conservative Jewish conversions performed in Israel.

The ruling sparked protest from haredi Orthodox religious leaders, as well as a stream of derogatory comments about Reform Jews from haredi politicians and campaign ads mocking them. Even Prime Minister Benjamin Netanyahu claimed, without evidence, that the ruling could lead to Israel being “overrun” with “fake” Jewish converts from Africa.

The spat over the conversion ruling came while haredi politicians vowed that they would not work with Kariv in the Knesset, or even count him in a prayer quorum. In February, a haredi journalist lamented a photo of Kariv hanging a mezuzah on the doorway of Labor’s headquarters.

Kariv portrayed the attacks as one more reason to fight the haredi monopoly over Israel’s religious policies — something advocates for religious pluralism have long opposed.

A resident of the Tel Aviv suburb of Givatayim, Kariv grew up secular and attended an Orthodox synagogue before finding a home in Israel’s small but active Reform movement. For more than a decade, Kariv has fought for religious pluralism in Israel, calling for recognition of non-Orthodox conversion and marriage, greater separation between religion and state, and a space for non-Orthodox worship at the Western Wall.

“Because of the monopoly, the rabbinic establishment has become more and more haredi and extremist over the years,” Kariv wrote on Facebook this month. He called for “breaking the monopoly and opening new alternatives for a relevant and welcoming Israeli Judaism.”

Although almost all the votes are counted, it will likely be weeks, if not longer, until Israel’s next government takes shape. Labor will be part of the governing coalition only if Netanyahu’s disparate opponents manage to cobble together a majority. Otherwise, it will be part of the parliamentary opposition.

But whatever his role will be, Kariv says that his very presence in Knesset is itself a victory.

“This is the first time in Israel’s Knesset, according to all the exit polls, that we’ll have direct, clear, unprecedented representation for Reform Judaism,” he said in a Facebook video Tuesday night. “We’ll wait and see what the results are but one thing is clear: We have made it into Israel’s Knesset, with our messages, with our values. We’re sounding a Jewish, egalitarian, democratic voice that strives for social justice, loves humanity and strives for peace. PJC”