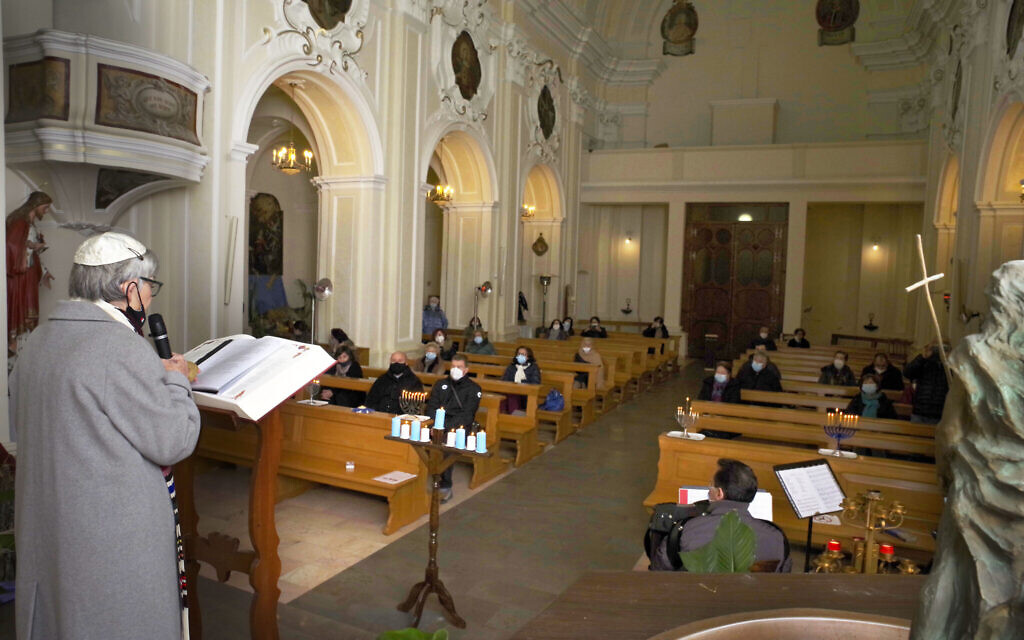 Rabbi Barbara Aiello, left, addresses participants during a 2020 Chanukah celebration. The community also celebrates other, less well known, holidays, like The DAy of the Dead. Photo by Domenico Pulice, Italy

As Italians prepared for Giorno dei Morti, the Day of the Dead that is observed each year on Nov. 2, our local grocery stores, fruit markets and newsstands were busy stocking the commemorative candles that Italians light at home or take to the cemetery to place at the graves of their loved ones. But here in Serrastretta, in my Calabria mountain community, vestiges of Yizkor traditions are among many of the lost Jewish traditions that for centuries continue to hide in plain sight.

“We have the short white candle,” says Rosaria, proprietor of the local edicola, (newsstand) that doubles as a variety store reminiscent of times gone by. “The red candles have the Catholic symbols, the crosses and the picture of Jesus,” Rosaria explains, “but the white candle is plain, just perfect for the laici in our town.”

Laici is the Italian word for “secular,” and here in our village the word often serves as code for residents whose ancestors include the “crypto-Jews,” also called the b’nei anusim, a phrase that refers to the Spanish Jews who fled expulsion and forced conversion and eventually found safe haven in our Calabrian mountains. It was here that these secret Jews clung to Jewish traditions slowing embedding them into common Christian practice so that their beloved heritage might survive. Calabria’s Day of the Dead observance offers one example.

Publicity surrounding the Day of the Dead often focuses on Mexico and other Latin American countries, where singing, dancing and colorful celebrations dominate the day.

By contrast, in Spain, the day is characterized by somber mourning and remembrance as Catholics observe a tradition likely borrowed from their Jewish co-religionists.

Today, Calabresi Italians who boast Spanish ancestral roots continue the practice. The candle is lit at sundown, or erev, and then at the dawning of the day known as both the Day of the Dead or as All Souls’ Day, a special mass is offered where the names of those who died during the previous 12 months are read aloud. It is a somber and reflective day where congregants are encouraged to make a monetary donation in honor and memory of loved ones who passed on.

Are these Yizkor traditions? It is entirely possible that the practices of Spanish anusim Jews directly influenced Italian Catholic observance.

Historians and scholars allude to a possible overlap when they study the origins of the Yizkor service, an observance that first appeared in a holy day prayer book written in the 11th century by none other than one of Rashi’s students. At the same time and in practically the same French neighborhood, a Catholic prelate crafted the very first church service for the Day of the Dead.

Coincidence? It could be, but a coincidence not easily dismissed. The families in my village who choose Rosaria’s unadorned white candle may be signaling an obscure connection to a Jewish memorial that has been lost to them for centuries. We can’t be certain, but rather than dismissing a possible connection, we extend the hand of Jewish welcome to those whose Judaism may be little more than a tiny, flickering flame.

As she hands me my white candle, Rosaria recalls our own hidden traditions. “Rabbina, this candle is for the synagogue. When you light it, you will show everyone on the Day of the Dead, that in our village Judaism never died.” PJC

Rabbi Barbara Aiello, originally from Pittsburgh, is the first woman and first non-Orthodox rabbi in Italy. She opened the first active synagogue in Calabria since the Inquisition and is the founder of the B’nei Anousim movement in Calabria and Sicily, helping Italians discover and embrace their Jewish roots.