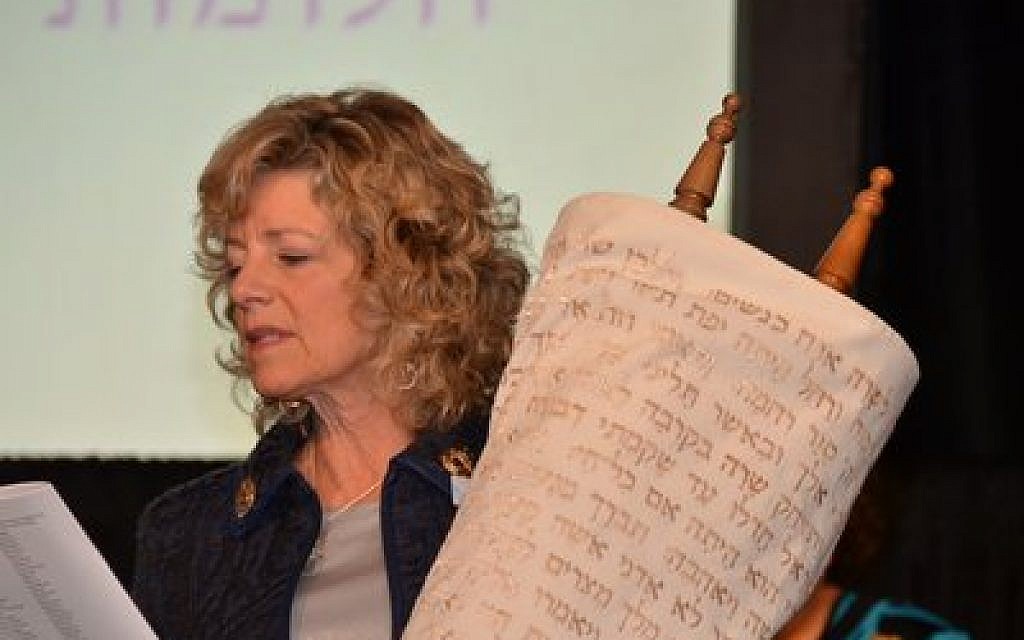 Lynn Magid Lazar cradles the Torah of Women of Reform Judaism as she is installed for her second term as president of the affiliate of the Union for Reform Judaism. Avigayil Halpern has wokred to include women's voices into her Torah study. (Photo courtesy of Dale Lazar)

Many of my fellow rabbinical students and friends are enthusiastic about a new strategy for elevating women’s voices in Torah study into the beit midrash this fall.

The Kranjec Test — named for Danielle Kranjec, the Jewish educator from Pittsburgh’s Hillel JUC who created it — holds that collections of texts known as source sheets must include at least one non-male voice. It’s the Jewish studies equivalent of the well-known Bechdel test for film, in which movies pass if they include two women having a conversation about something other than men, and it quickly gained currency among my colleagues.

On paper, I perhaps ought to have leapt at this new framework. I have been committed to women’s Torah study since I spent summers during high school studying at the Drisha Institute, one of the first institutions in America to open the doors of Talmud study to Orthodox women, and I wrote my undergraduate thesis on finding new modes for feminist Talmud study. I’m currently blessed to spend my days immersed in full-time Torah study as a rabbinical student, and questions of what feminist and queer Torah are and ought to be are at the forefront of my interests.

And yet I balked.

My reservations were primarily practical. My current Torah learning involves intense study of Jewish law, and for the course of Jewish history, the vast quantity of received wisdom on areas like kashrut and Shabbat simply has not included writing by people other than men. I worried that adding texts in those areas to meet the Kranjec Test would amount to tokenism at best.

My instinct was to look at the absence of non-men’s voices with clear eyes. Yes, it’s a canon written by men! That problem can’t be solved, I thought, by pretending that’s not the case.

I am not the first to point out that the problem is not a failure to include existing voices in the Jewish canon but the fact that these voices don’t yet exist. Rabbi Becky Silverstein and my teacher Laynie Soloman made this argument in their response to the original article proposing the Kranjec Test. Some of my Orthodox women friends argued that meeting the test would require turning too often to texts from outside the traditional rabbinic canon. Rabbi Michael Rosenberg framed that criticism, which he ultimately argues against, in his writing about the Kranjec Test, as “Does such a source sheet send the message that ‘Torah’ is for men, and ‘supplementary materials’ are for non-males?”

I also had another concern: Learning Torah as a queer woman is already at times hard, and teaching it can be harder. There are the inevitable moments of hurt and alienation that come from loving a vast body of wisdom that was not created by people who share some of my most fundamental experiences. Along with that comes the workaday burden of sexism I face as a young woman trying to hold the attention of a classroom: interruptions, a student implying that I’m unqualified and the whole genre of experience so familiar to so many of us.

Should I now make that process even harder by also taking extra time and energy to seek out a source I otherwise would not have and try to integrate it into my work? Is this not an additional ask for those of us who already strain so much for our Torah? And, on another level, would my voice as the teacher then be made invisible? After all, I was contributing to the Torah I offered by putting it together and teaching it, and I am a woman: Did I really need to put another non-man on the source sheet on top of that?

In the middle of all this thinking, I looked around and realized I had unwittingly been adhering to the Kranjec Test without meaning to. At my yeshiva, we start each day of Zoom learning with a 10-minute dvar Torah on the parsha from a student, and every other Tuesday it was my turn. The first time, I posted to Facebook looking for specific sources about the few verses of Lech Lecha I was planning to speak on. A friend recommended a recorded sermon from a woman teacher, and her Torah was exactly the insight I had been seeking. Two weeks later, preparing to teach my 10 minutes on Chayei Sarah, I was at a loss looking at the commentaries on the page of my Chumash. I turned to the bookshelf behind me and pulled out a book of essays on the parsha, and again the crystallizing insight I needed came from a woman.

After that, I committed to myself that each turn I had to teach on the parsha, I would include the voice of someone who was not a man in my dvar Torah. I made this commitment gently, tentatively — every time I told myself, “Well, I’ll see what I can find, and if it becomes too hard, I won’t hold myself to it.” And every time I was able to turn up exciting, fresh Torah with minimal difficulty.

The parsha is doubtless the easiest area in which to find Torah teaching from women and other non-men. Thank God, there is such a wealth of weekly divrei Torah by people of all genders across every stream of Judaism, and the weekly parsha is an area where even Orthodox women have been recording their teaching for decades now. But what this gentle, experimental commitment taught me was not just that it might be easier than I thought to find this kind of Torah on the parsha, but that I felt different when I sought it out.

Nothing I learned mitigates the structural concerns that Silverman and Soloman crucially point out, and however far behind men’s Torah written “women’s Torah” is, the Torah of trans and nonbinary people and of Jews of color and disabled Jews has been even more limited. This is, as Rosenberg points out in his article, not just bad for Jews but bad for the Torah. The Kranjec Test is insufficient to solve that problem, which is one that all Jews who care about the Torah should put our attention and resources toward.

But what I was not considering when I felt so much resistance to the Kranjec Test was what it might feel like to regularly learn and teach Torah from people who reminded me of myself in a deep way. I have always been blessed, in many spaces and for much of my life, to learn Torah — often from women and sometimes from queer teachers as well — in frameworks that taught me I was its inheritor and part of the vast conversation of the Jewish textual tradition. I felt close to the Torah, and like I had every right to learn and teach it. I would have told you I was extremely well-adjusted when it comes to learning texts almost exclusively by men.

But when I started to regularly learn and teach written Torah from people who were not men, something in me almost imperceptibly began to feel different. It’s hard even a few months in to find the words to capture the different kind of settledness I feel in my chest when I give a dvar Torah that includes a Torah insight from someone like me. I thought that I was as close to the Torah as I could ever get, but I was wrong.

The Kranjec Test made me realize that I am unsatisfied by accepting the absence of women’s voices in Jewish law as a historical reality. Being alive to that absence instead of just pushing past it has made me more aware of who I am when I learn Torah, less willing to brush aside my own experiences and needs. I am less willing to accept the inevitability of who’s not there — making me more aware that I’m there myself. pjc

Avigayil Halpern is studying for rabbinic ordination at the Hadar Institute in New York This article was first published by JTA.