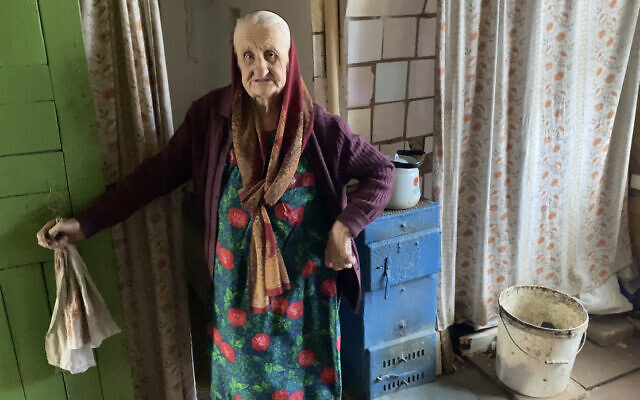 Lyubov Arkhiptsova-Volchek at her home in Hlusk, Belarus, March 2021. (Photo via From the Depths via JTA)

(JTA) — In 1998, the now 90-year-old Lyubov Arkhiptsova-Volchek was recognized as a Righteous Among the Nations – Israel’s title for non-Jews it recognized for risking their lives to save Jews during the Holocaust – for helping hide her 11-year-old Jewish friend from the Nazis.

“There’s no indoor toilet. The place is falling apart,” Jonny Daniels, head of the Warsaw-based From the Depths organization, said about her home. “She wears coats indoors in winter because the place drops below freezing temperatures. She needs to find blocks of wood for heating. It’s a disgrace.”

So From the Depths — a group that raises Holocaust awareness and has created other programs for survivors and their rescuers — arranged for an upgrade for Arkhiptsova-Volchek. As a part of the world’s first housing project for Righteous Among the Nations, she will move into a newly renovated apartment in a building across the street from the synagogue in Babruysk with the help of $50,000 that Daniels has raised for the initiative. Most of the donations came from an online fundraising campaign that features a video of Arkhiptsova-Volchek at her home.

Arkhiptsova-Volchek is one of only two Righteous to move into the building at first, but the goal is to house more of the rescuers who have fallen into poverty since the war.

The city’s rabbi, Shaul Hababo, a Chabad-Lubavitch emissary, confirmed that he is part of the project.

“The plan is to have them live in greater comfort, but also involve them in community life so they don’t feel lonely,” Hababo said of the soon-to-be residents, who are scheduled to move in this summer following some renovations to the building that include making it more accessible to very elderly people.

Babruysk was once one of the world’s largest shtetls, but its Jewish population was nearly annihilated in the Holocaust.

They hid Shulman in a shed in their yard. When Nazi raids became more frequent, they sent Shulman to other relatives before again hiding her in their home. Shulman survived the Holocaust thanks to her saviors’ efforts, according to Yad Vashem.

Babruysk has several hundred Jews — a relatively sizable number for a city outside the Minsk region, where most of Belarus’ approximately 8,500 Jews are concentrated.

The apartments will remain at the disposal of Babruysk’s Jewish Community after they are no longer used by the rescuers and “will be used to help people in need from the community,” Hababo said.