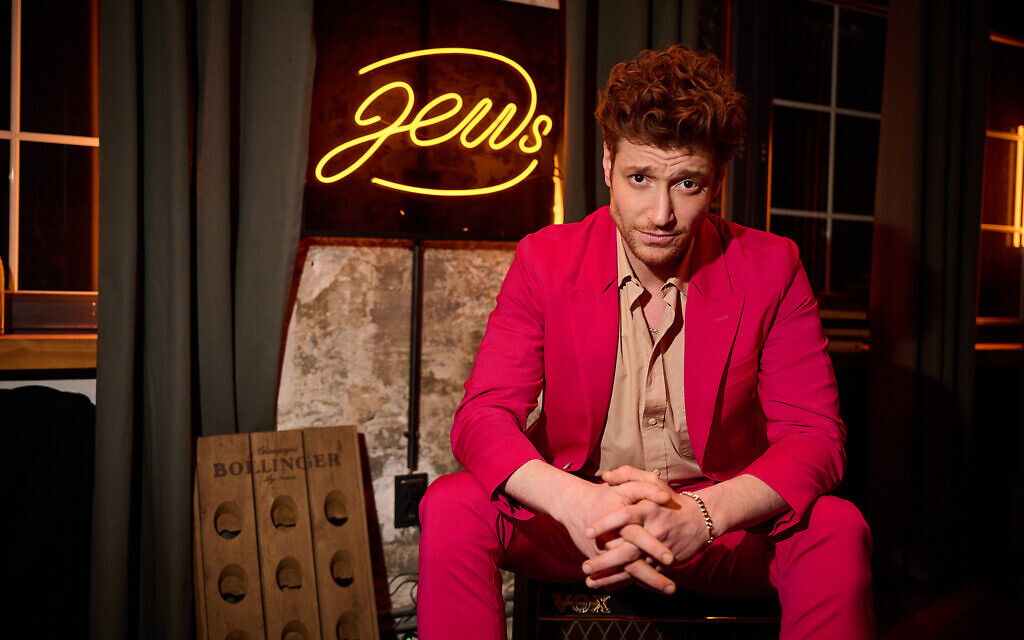 The phrase — “Jew, Jew, Jew is just a word” — comes near the start of the opening rap theme song to the German talk show “Freitagnacht Jews” (“Friday Night Jews”), a state-sponsored program aimed at broadening the German public’s understanding of Jews and questions of Jewish identity.

The rap goes on to other punchy lines, such as “Antisemitismus ist in Deutschland Sport” (“Antisemitism is a sport in Germany”), before lapsing into a refrain of “Jude, Jude, Jude” like a kind of techno niggun.

At the start of every episode, viewers join the show’s host, Jewish actor Daniel Donskoy, in the kitchen. He’s busy whipping up a mix of traditional Jewish dishes for his guests, like latkes and borscht, or Moroccan chraime, as taught to him by Shani Leiderman — the owner of the Israeli restaurant Beba in Berlin.

Next, the episode’s guests are introduced. Joining Donskoy thus far at his roundtable have been figures such as Helene Braun, poised to be the youngest and first openly LGBTQIA rabbi in German history, and Sascha Chaimowicz, editor in chief of Zeit-Magazin (the prestigious magazine of the widely-read Zeit newspaper), who has a German-Jewish father and a mother from Trinidad and Tobago.

“We talk to [Sascha] about what it means to be Black and Jewish in a country where Lenny Kravitz doesn’t exist, where Drake doesn’t exist,” Donskoy says.

While parts of American society are far more familiar with the basics of Jewish culture, humor and history — thanks in no small part to the ever-growing slate of TV shows and films with Jewish characters — Jewish representation in German media is largely limited to Holocaust films, deeply tying public perceptions of Jews to the tragedy or to Israel. In that context, “Friday Night Jews” is a radical and ambitious program. It recently finished up its first season of eight episodes, and while a second season has not been announced yet, viewers can watch the first online (in German).

The show is just one of the German government’s many initiatives tied to a year-long sponsored celebration of 1,700 years of Jewish life in Germany — a program that some local Jews have criticized amidst a wave of antisemitism plaguing the country.

“Let’s get all the cliches on the table!” Susan Sideropoulos says.

That kind of direct humor generally makes Germans uncomfortable, but it’s a staple of the Jewishness Donskoy says he wants to celebrate. That brand of comedy was never a problem for him while living in London, where he performed in the play “Bad Jews” in the West End, he pointed out. The 31-year-old, who was born in Moscow and lived in Israel in his teenage years, now splits his time between London and Germany, where he appears in both English and German TV shows. He is one of thousands of Soviet refugees who make up a large part of Germany’s contemporary Jewish community — and who have a completely different culture than native German Jews who survived the Holocaust.

“In Germany, could you imagine a play at the Deutsches Theater in Berlin called ‘Die Schlechten Juden’ [‘The Bad Jews’]?” he told the Jewish Telegraphic Agency. “That wouldn’t work and that is sad because it means we are denied parts of our humor.”

The show closes with an “Ask A Jew” segment, offering non-Jewish viewers the opportunity to ask questions. Questions range from discussions on the police presence in front of Jewish institutions to whether or not Judaism is a religion, a nationality or both. (It is actually a history, answers Max Czollek, a Berlin-based author and poet who appeared in an episode.)

One viewer writes in asking Donskoy about how he feels about circumcision, namely his own. After laughing, Donskoy says that he was circumcised on the living room table at his grandmother’s house, the same table where he eats dinner with her to this day. Czollek then asks if this is the grandmother that makes the good borscht they ate at the start of the episode, joking that it probably does not have any blood from Christian children in it.

The humor may land with Jewish audiences, but there are explicit nods to non-Jewish ones as well — pop ups on screen explain that Hanukkah is the Jewish festival of lights, and that “l’chaim” means “to life” when the guests clink their glasses.

Donskoy agrees that the strangeness of Jewish representation in German media is because Jewishness remains attached to the traumatic legacy of the Holocaust. In the first episode, he mentions a study that shows the first four terms that Germans think of when they hear the word “Jew” are “Holocaust,” “antisemitism,” “Hitler,” and “Israel/Palestine.”

This, Donskoy argues, is how a lot of German antisemitism starts; anyone who identifies as Jewish is immediately attached to “negative-driven” topics.

“Antisemitism doesn’t need to be a person who says ‘I hate Jews.’ Antisemitism starts the moment you think differently about a person,” he said. “It’s not the person hates you, but a person attaches only negative-driven themes the moment they know you’re Jewish.”

Donskoy spoke to JTA in between filming two projects, one of which is called “Faking H.” and is about the 1983 media scandal when a West German news magazine purchased the alleged diaries of Adolf Hitler for $3.7 million. The diaries were later revealed to be fakes.

After a brief introduction to what the Jewish Telegraphic Agency is, Donskoy laughs and says: “That’s how Jews control the media.”

Against the historic backdrop of German history, Jewish programs there geared towards non-Jews — either exclusively or in tandem with Jews — are still noteworthy events. The Central Council of Jews in Germany’s recent “Meet A Jew” program, in which German Jews told their stories to non-Jews, usually in classroom settings, garnered mixed reactions. Some celebrated the mission to increase non-Jewish Germany’s exposure to Jewish people; others felt the initiative, itself an evolution of an earlier “Rent A Jew” program, paraded Jews in front of Germans for their benefit.

It recalled an earlier, more controversial exhibition called “The Whole Truth,” put on by the Jewish Museum of Berlin in 2013. The exhibition included a sign that read “Are there still Jews in Germany?” and included a Jewish person two hours every day outside of Saturday to answer questions.

The response from Jewish audiences and German press covering “Freitagnacht Jews” has been mostly positive.

“First, it’s great that there’s a show on German television where Jews aren’t playing the role of the victim,” said Rebecca Rogowski, a 24-year-old activist and Jewish studies student.

On this point, Semra Kizilkaya, a 28-year-old linguist and activist engaged in Jewish-Muslim dialogue, agrees.

“I enjoy the new perspective in discourse it sets about being Jewish in Germany today, and the plurality of voices it shows on even the very basic questions,” she said. “At the same time, it is one of the few formats in public television where a minority group sets their own agenda, acclaims their own voice, and for once, the others listen.”

But Rogowski also felt the show confirmed certain cliches about Jews — like the idea of “two Jews, three opinions” — without offering clear and productive conversations about them.

“Everyone was constantly interrupting and it was difficult for viewers to follow,” she says.

Still, 72% of the 54 people who responded to a poll she posted on Instagram said they liked the show overall.

Kubra Dalkilic, a 25-year-old Islamic theologian and research associate at Forum Dialog in Berlin, says she likes the show and appreciates the insight into Jewish life and cuisine. She added that she feels like she can relate to the guests when they discuss their shared distaste for being reduced to their Jewishness.

“As a Muslim woman, that’s something I can definitely understand,” she says.

Rogowski hopes that “Freitagnacht Jews” continues to develop, showing non-Jewish Germans that Jews have fun, and “that although we have collective trauma, we don’t allow ourselves to be defined by it.” She wants to see the show promote pluralistic values that are core to her Jewishness.

On that point, Donskoy clearly has her in mind.

“Once you have a voice, you need to use it,” says Donskoy. “I as a person stand for a pluralistic way of living. Multiculturalism is something I really propagate and I live.” PJC