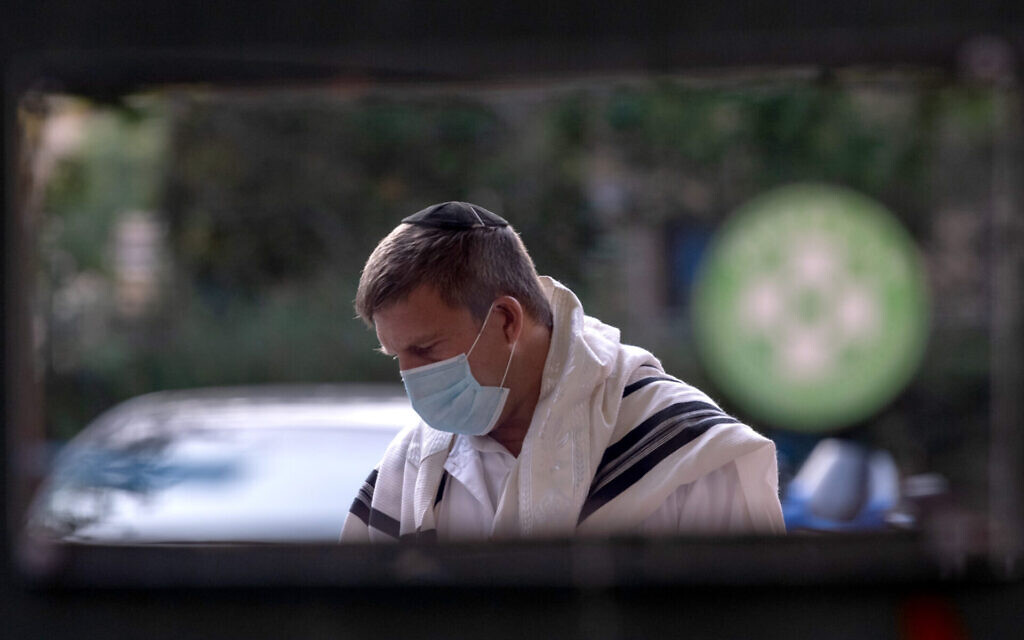 An Orthodox Jewish man wearing a mask prays at an outdoor Yom Kippur service on New York City's Upper West amid the coronavirus pandemic, Sept. 28, 2020. Edieal Pinker believes we should be investing resources in the Orthodox community. (Alexi Rosenfeld/Getty Images via JTA)

Earlier this year, I used the findings of the Pew Research Center’s 2013 “A Portrait of American Jewry” to make projections about the future demographics of the Jewish population. I anticipated a small population increase by 2023 followed by steady decline for several decades following that — and a very sharp decrease in the number of self-identifying Reform and Conservative Jews between 30 and 70 years old.

Pew’s latest survey, “Jewish Americans in 2020,” released this week, also shows an increase in population since 2013 but one that seems implausibly large, and may lead some to believe that American Jews are widely thriving. However, the new study reports the same factors indicating that the Orthodox will continue to become a much larger proportion of the Jewish population while the Reform and Conservative decline.

If history is any guide, the organized U.S. Jewish community will use these figures when allocating its investments in the Jewish future. Policymakers will call for more investment in the demographically fading populations in hopes of stemming the tide. But the Pew 2020 findings suggest the need for just the opposite: The demographically thriving parts of the population are exactly those that want and need more resources and infrastructure. It is the most connected and religiously affiliated who attend synagogue, send their children to Jewish day schools and, in an intriguing finding, are the biggest consumers of Jewish culture.

A common view, put coarsely, is that the Orthodox don’t need much help: They prioritize Jewish life already and are a small population. Therefore, resources should go to serving the much larger but more loosely affiliated Jews to draw them in. In that thinking, the Orthodox are peripheral to the majority Reform/Conservative-led community.

Demographic realities are making this logic obsolete. For example, Orthodox children today are probably 30% of the total of all Jewish children and growing steadily. Supporting their education is no longer a niche activity, especially if you include the children from other branches who seek day school education in Orthodox settings.

Jews who are more engaged need to live in areas with other engaged Jews in order to have access to the Jewish infrastructure they need and desire. Their need for critical mass, greater investment in Jewish activities and growing numbers will lead the more observant Jews to have a disproportionate role in the lives of their communities. Two of those factors have always existed, but the new element is population growth. Numbers matter. Thus the notion of what is the core of a Jewish community will be inverted. Done right, this new core, with many religious, cultural and social institutions, will provide opportunities for Jews of all stripes to engage.

With centrality comes responsibility. During this period of growth, Orthodox Jews, particularly the Modern Orthodox, must take a leadership role that is inclusive so that their newfound strength is a resource for the non-Orthodox as well. This requires a transition from insularity to outreach and mutual respect.

Pew 2020 reports how much (or little) various subpopulations of Jews feel in common with others. While the majority of Israeli Jews are secular, U.S. Orthodox Jews feel more commonality with them than with non-Orthodox fellow American Jews. Clearly there is work ahead. PJC

Edieal Pinker is the BearingPoint Professor of Operations Research at the Yale School of Management where he also serves as chief academic officer and deputy dean. This piece first appeared on JTA.