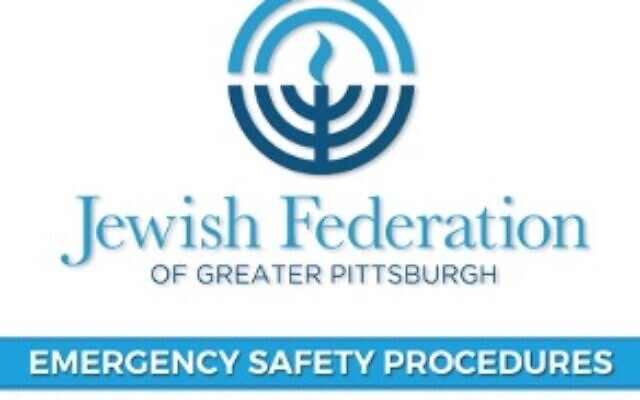 Photo provided by the Jewish Federation of Greater Pittsburgh.

During a closed-door meeting on July 14 at Rodef Shalom Congregation, executive directors and other leaders of local Jewish institutions were updated on the current threat level in Pittsburgh in light of the recent surge of antisemitic attacks throughout the country and regionally. The meeting was convened by Shawn Brokos, community security director for the Jewish Federation of Greater Pittsburgh.

Coinciding with the recent rise of antisemitism, is the rise in the number of active shooter incidents around the country, Brokos told the Chronicle following the meeting.

To date, there have been 44 antisemitic incidents in Pittsburgh in 2021, Brokos said, a sharp increase from last year, which saw a total of 40 incidents. The number is consistent with antisemitic incidents in other metro areas, including Cleveland and other nearby cities, she said, and includes the three recent assaults — two verbal and one physical — in Squirrel Hill. Police continue to investigate the three incidents.

On July 7, The Pittsburgh Bureau of Police released its report “Review of Ethnic Intimidation Incidents for the First Half of 2021.” It referenced two incidents here in which Jewish individuals were targeted because of their faith. It also reported 11 incidents targeting victims because of their race, religion, disability or sexual orientation. In 2020, eight incidents were reported for the entire year.

During last week’s meeting with community leaders, the Federation offered standardized procedures to be followed in various crisis situations. The plans include checklists providing consistent steps for all Pittsburgh-area Jewish institutions to follow in the event of an active shooter, bomb threat or hostage situation, as well as several other emergencies, including floods, fires and medical crises.

“I cherry-picked what I thought was best from emergency plans across the country,” Brokos said. “I wanted something that was a quick reference guide so that, for example, if there was a bomb threat, you can go right to that tab and there’s a step-by-step guideline or checklist as to how to respond.”

The meeting also offered guidance to organizations that will be applying for both state and federal security grants in 2022, Brokos said. While the Pennsylvania Commission on Crime and Delinquency Nonprofit Security Grant Fund program — established in 2019 after the Pittsburgh synagogue shooting — was not funded for the coming year by the Republican-led legislature, community leaders are “identifying how to continue this program moving forward,” according to Laura Cherner, director of the Federation’s Community Relations Council. “In the past, our local elected officials have been very supportive and we expect that support to continue.”

Brokos urged executive directors and community leaders to contact their public officials and encourage them to push for the program’s funding in Harrisburg. One possibility could be funding the grant through the state’s discretionary fund, Brokos said.

Grants from the federal Nonprofit Security Fund program, run by the Department of Homeland Security, are still available. That program typically opens in March and awards funds in August.