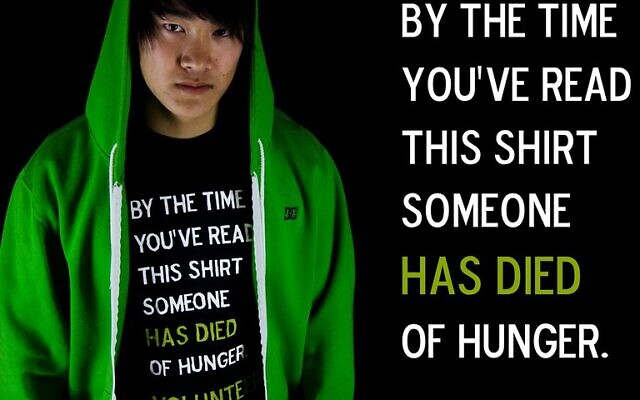 Hunger by The Factionist, courtesy of flickr.com.

Athis time of year, Jews around the world engage in moments of reflection and renewal. We read that each human being is created “b’tselem Elohim” — “in the image of God” — and we eat special foods that are meaningful to our families and our communities.

This year, we have an opportunity to reflect not only on our personal and communal struggles but also a chance to chart a path forward for those facing hunger in our nation.

On Sept. 28, President Joe Biden will host a White House Conference on Hunger, Nutrition and Health. As the head of MAZON: A Jewish Response to Hunger, a leading anti-hunger organization built on Jewish values working to end hunger in the United States and Israel, I believe the upcoming conference can provide a historic opportunity to envision and advance bold, transformative ideas.

At the same time, I harbor no illusions that a one-day summit of political leaders, policymakers, academics and advocates will immediately realize the vision of MAZON’s founders in 1985. MAZON was founded on the vision of working toward systemic change so that every American can put food on the table.

To truly end hunger, we need the political will to examine the roots of societal problems — racism, sexism, anti-immigrant sentiment and other forms of discrimination that contribute to persistent inequities, including food insecurity. With an understanding of those systemic biases, we can then attempt to build strategic, long-term solutions to end hunger with creativity, open dialogue, and vision. It is only through an honest understanding of our history — including the history of hunger and our response to it — that we can begin to realize meaningful policy changes that can truly address the problem.

The only previous White House Conference on hunger took place in 1969, and it led to the expansion of federal food programs that to this day provide a critical safety net when troubled times strike the most vulnerable. The 1969 conference led to the broad national expansion of the Supplemental Nutrition Assistance Program (SNAP, formerly food stamps), the Special Supplemental Nutrition Program for Women, Infants, and Children (WIC) and the National School Lunch Program. It was the dawn of an age of unprecedented progress against hunger and malnutrition.

Then the 1980s reversed that progress. Draconian policies of federal aid cutbacks, fueled by racist and sexist tropes, low-wage jobs, and corporate takeovers of our food and farming industries, propelled the dramatic rise in the number of Americans unable to regularly access nutritious food. While most of us manage to weather boom and bust economies, financial crises like the 2008 housing market collapse, and the more recent global pandemic and spiking inflation, have only pushed more people to the brink amid widening income inequality.

During the pandemic, we all saw news reports of long lines at over-burdened food pantries. While a robust charitable sector provides vital resources in emergencies, federal nutrition benefits provide a lifeline for those who struggle to put food on the table. When the Biden administration boosted benefit levels for programs like SNAP, WIC, Pandemic-EBT (P-EBT), and the Child Tax Credit during the pandemic, we saw something remarkable: a front-line defense that kept even more people from the long lines at charities.

The just-released annual Department of Agriculture report, “Household Food Security in the United States in 2021,” reveals that about 10.2% of Americans experienced food insecurity last year, a rate nearly unchanged from the year before, despite the worsening economy. While that is relatively good news, the persistence of hunger and the brutal fact that 13.5 million households are experiencing hunger remains a national disgrace.

The White House Conference can be a first step toward ensuring that no household goes hungry. At MAZON, our vision is that the conference is but the beginning of the real, difficult work of looking at where we’ve been, how we got here, and why we are still faced with millions of American families who do not know where their next meal will come from.

We cannot turn away from the hard questions: Why do single mothers face food insecurity at twice the national average? Why are Black families nearly twice as likely to experience hunger as white families? Why is there a food pantry at or near every single military base in America? Despite alarming rates of hunger among Native Americans, why doesn’t the USDA report collect data about hunger among Indigenous households?

Guided by the Jewish values of tzedek (pursuing justice) and respecting the inherent dignity of every person — for we are all “b’tselem Elohim” — we are committed to confronting the root causes of hunger, and this must include understanding what brought us to this moment, and why the stark disparities among the most vulnerable not only exist but persist.

If the upcoming White House Conference leads us down that path, we will finally be taking steps to ensure that hunger becomes a thing of the past in America. pjc

Abby J. Leibman is president and CEO of MAZON: A Jewish Response to Hunger.