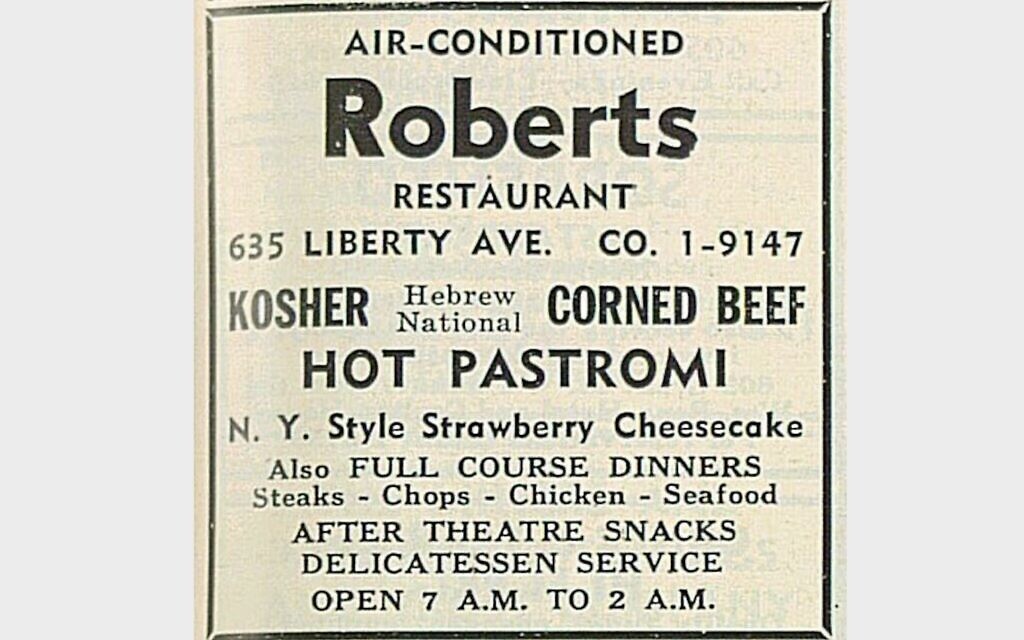 I wish there was more documentation of local Jewish-owned eateries. Aside from some good photographs of old mom and pop groceries stores, there is very little about the many restaurants, delicatessens and bakeries that fill thousands of Jewish hearts with warm nostalgia. So many beloved places like Caplans, Weinsteins, Richests, Bubbles & Sherman, Rosenbaums, Silberbergs, Pastries Unlimited, Simple Treats, Yaakovs, Bageland and many more exist today only in advertisements and occasionally in menus.

The Rauh Jewish Archives recently received a matchbook cover from Robert’s Restaurant & Bar. It’s not one of the better-known Jewish restaurants in town. I’d never heard of it. Without the “Kosher” symbol, I wouldn’t have even known it was Jewish.

Robert Weinstein — who seems to have had no direct relationship to Weinstein’s Restaurant — was a young entrepreneur in the early 1950s with a playful, modern sensibility. He briefly ran a shoe store on Market Street called Bobman’s and then went into the restaurant business. His parents, Hyman and Ann Weinstein, were real estate investors who owned several downtown properties. They bought 635 Liberty Avenue in early 1953 and gave the ground floor to their son for his new restaurant and bar.

Available documentation of Robert’s Restaurant comes from newspapers, and it’s filtered through that sensibility. For example: The day before the restaurant was set to open in February 1953, the building caught fire, paralyzing downtown traffic. All the local papers covered it. One even showed Robert Weinstein in tears, watching the blaze. 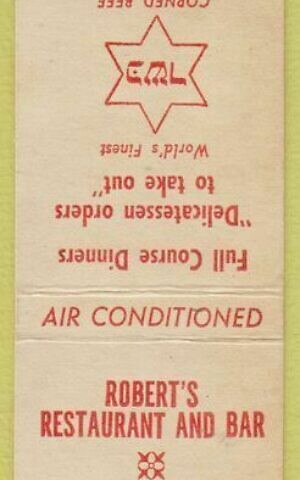 Robert’s Restaurant operated on Liberty Avenue from 1953 into the early 1960s, catering to Jewish eaters downtown. (Matchbook Album Store)
Another example: In 1963, a busboy from Robert’s Restaurant was robbed while taking the day’s earnings to the bank. City detectives were suspicious. They questioned the kid, and he quickly admitted to faking the robbery with some friends. He was given one-year probation but kept his job, thanks to the collective mercy of all parties involved.

When I first saw the matchbook, I briefly assumed Robert’s was a kosher restaurant, the way we think of the term today. The ad suggests otherwise.

“Cheesecake” is just a little too close to “Steaks-Chops-Chicken.” It may be possible to construct a kosher restaurant where milk and meat dishes are strictly separated, but that innovation seems unlikely in downtown Pittsburgh in the early 1950s. And then there is that suspiciously ambiguous term “Seafood,” which could mean salmon but probably doesn’t.

Looking at the matchbook again, “Kosher” seems to refer only to the Hebrew National corned beef, not to the restaurant itself. The legitimacy of the kosher supervision of Hebrew National products was one of the hallmark kashrut debates of that era, and so even that one intriguing detail ends up revealing not all that much about the restaurant.

It’s not this way for all Jewish businesses. The documents that survive from Jewish-owned clothing stores include sales ledgers and purchasing invoices. With those, you can do a good job of reconstructing the spirit, atmosphere and affairs of the store.

But those sorts of internal records have rarely survived from local Jewish-owned restaurants. Instead, we are left with whatever was presented to the world at the time: menus, matchbooks and advertisements. You can learn from these, too. If you analyze menu offerings or marketing terms like “kosher-style” or “strictly kosher,” you can draw certain conclusions, and you can situate those conclusions within national scholarship to understand the evolution of Jewish eating practices at a certain place and a certain time.

They just don’t explain how decisions were made in the moment. Why did some businesses seek religious approval and others ignore it? How did those businesses seek that approval? What was involved in getting it? What did diners think about it all?

Having answers to those questions would present a detailed portrait of a community undergoing a religious transition. Without answers, we are left with a word, “Kosher,” that can mean everything or can mean nothing, depending on the context. PJC