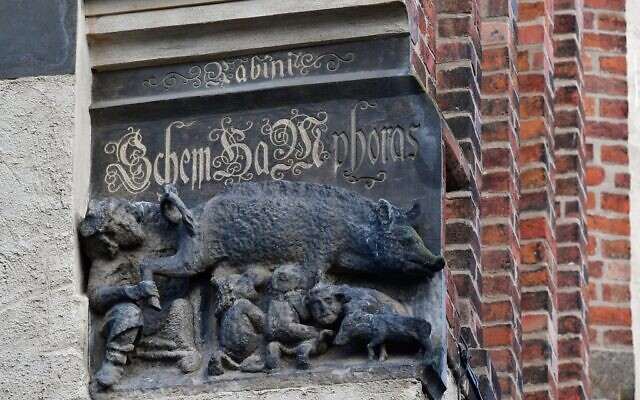 The Judensau sculpture on display on the outer wall of the town church of St. Marien in Wittenberg, Germany, Feb. 4, 2020. (Hendrik Schmidt/picture alliance via Getty Images)

BERLIN (JTA) — A one-man effort to remove a medieval anti-Jewish sculpture from public view in Germany has failed.

The Federal Supreme Court in Karlsruhe announced Tuesday that the St. Marien Church in Wittenberg does not have to remove the— sculpture from its façade, since the church administration had adequately distanced itself from the original antisemitic intention.

The Judensau is a Christian folk image dating back to the Middle Ages that depicts Jews suckling on the teats of a pig, peering into its anus, or, in the case of the Wittenberg relief, both.

Michael Duellmann, who is Jewish and has pressed the case in lower courts, is vowing to take his fight to the next level, to Germany’s highest court of human rights. These sculptures are “much more than merely insulting,” he said in a phone interview. “They are an inducement to murder.”

Placed inside or on the façade of churches, the statues were intended to teach lessons about sin and virtue. The relief in Wittenberg, which dates from the year 1290, is perched about 13 feet up on the church façade. The town is famous as the place where Martin Luther’s Protestant Reformation began in the 15th century.

Duellmann, 79, had demanded that the sandstone relief be removed because it was defamatory to himself and to Judaism overall. After losing his case in district court and on appeal, he took it to Germany’s highest criminal and civil court two years ago, where he lost.

Duellmann’s options now include taking the case to the Federal Constitutional Court in Karlsruhe, which deals with human rights-related cases, attorney Ludwig Benecke told the Jewish Telegraphic Agency. The basis for such a suit would be that such sculptures “insult the dignity of the human being,” which is against German Basic Law.

Speaking for the Lichtenfels-based law firm that has advised Duellmann throughout the process, Benecke explained it might be necessary to engage an attorney with experience in arguing cases before the Constitutional Court.

The process could take a lot of time, he said, but “I think [Duellmann] has enough energy to push it through.”

Should the Constitutional Court fail to take it on, the case could be brought to the European Court of Human Rights in Strasbourg, or the International Criminal Court in The Hague, Benecke said.

In delivering the verdict Tuesday, the court’s presiding judge, Stephan Seiters, said there was no “present infringement” of Duellmann’s civil rights, since the church had already installed an explanatory plaque, publicly and clearly distancing itself from the original antisemitic intentions.

In a statement issued Tuesday, the Central Council of Jews in Germany said it was disappointed in the decision.

The explanatory display does not “unambiguously condemn the anti-Jewish sculpture,” Josef Schuster, head of the Central Council, said. To really distance itself, “the church would have to clearly acknowledge its own guilt and condemn its centuries-long anti-Judaism” — something Schuster said he hoped this and other churches in Germany would finally do.

“The defamation of Jews by the churches must be a thing of the past,” he said.

The sculptures should come down all together, Charlotte Knobloch, former chair of the Central Council and longtime head of the Jewish community in Munich and Upper Bavaria, said in a press statement Tuesday.

“I had very much hoped for a different decision,” Knobloch added. “As the presiding judge himself has already said, this relief is ‘anti-Semitism chiseled in stone.’”

Duellmann told JTA that while he was disappointed in the verdict, he was pleased that his public challenge sparked conversation about historical and modern antisemitism in Germany.

There are an estimated 40 Judensau sculptures in Germany, the oldest dating to the 13th century. Most are found in the form of reliefs or gargoyles. The earliest versions were placed inside where Jews would not see them, but eventually churches also placed them outside. PJC