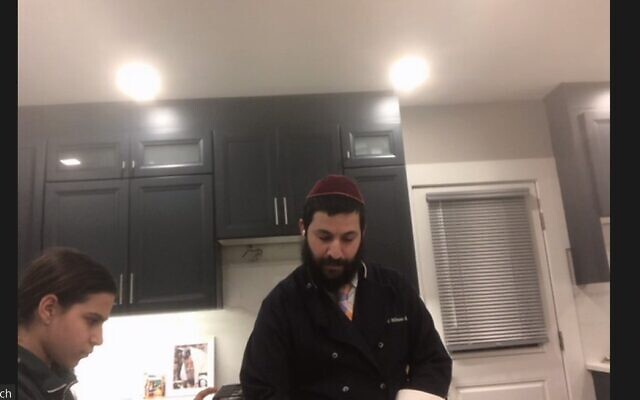 Rabbi Hanoch Hecht — a Chabad emissary living and working in Duchess County, north of New York City — remembers the video clip his mother showed him some seven years ago at her home in Crown Heights.

The video showed a young, aspiring chef, with a shaved head and a shaved face, competing on a Food Network show and saying he left Chasidism, in part, because he could not experience pleasure through food.

“Every flavor God created on the prohibited side, he created one on the permitted side,” Hecht told a virtual audience at an event hosted by Chabad of Western Pennsylvania on March 8. “This statement [the Food Network chef] said, of kosher being limiting, is not true.”

Hecht studied at the Culinary Institute of America in New York, and eventually made it onto Food Network himself. He was the first rabbi to appear on the network’s show “Chopped” and competed against a priest and a nun-in-training on a special episode titled “Leap of Faith.” During the March 8 program, Hecht told his audience that he appeared on “Chopped” to counter the earlier chef’s statements about kosher cooking and religiosity.

Monday’s event also featured Hecht preparing a red wine Spanish sangria — complete with cognac and quartered blood oranges — as well as fresh “Pesach cookies” made from almond flour he ground in a food processor, husks and all. The recipe for the cookies can be found in his book, “Kabbalah of Food.”

“Our job is to enjoy and celebrate the physical world,” Hecht told participants via Zoom. “Pleasure is a thing we need to experience to elevate the world.”

He said the debate about the physical experience of eating kosher food is not new. But he remains steadfast in his opinion that kosher food can be done well.

“When it comes to food, there are many, many laws that guide us,” he said. “But when we actually eat, we have to enjoy it.”

Rabbi Mendy Schapiro, who leads Chabad of Monroeville, said several Chabad centers around the Pittsburgh region were hosting pre-Passover programs and the idea of joining together to host the Hecht event was to help make pre-Passover shopping an educational experience.

“The program typically includes information about kosher food and the Passover ‘twist,’ along with sharing Passover recipes and insights,” Schapiro told the Chronicle. “Rabbi Hecht is someone who offers the full package. He is a chef with lots of cooking experience, he has recently authored a book on the Kabbalah of food and, to add to the appeal, he has competed on a well-known cooking show, ‘Chopped.’”

The Chabad event was positioned as a special treat because “people are starting to be more selective on their Zoom event participation,” Schapiro said.

“The community programming has to be presented in a way that it checks off all the boxes,” he said. “As we prepare for Passover, we wanted to present exactly that — a fun, educational Passover foods program with a great speaker.”

The “Chopped” episode “Leap of Faith” in which Rabbi Hecht competed will air on Food Network on March 30 at 3 p.m. It also is available on streaming services such as Hulu. PJC