A 100-year-old unsolved murder is getting renewed attention thanks to the victim’s granddaughter and some locals interested in preserving history.

The case, which was “one that was whispered from generation to generation,” has long captivated Kipp Dawson, she said during a May 19 program with The Battle of Homestead Foundation.

With the help of Chatham University Associate Professor Lou Martin and his students Zoe Levine and Claire Rhode, Dawson finally learned more about the death of her grandfather, Polish-born Herman Martius.

On April 5, 1922, Martius’ body was discovered in his ransacked dry goods store on West 18th Street in Erie. Reports showed that an ax was used to inflict two blows to the back of Martius’ head. At the time of the murder, Martius’ wife, Beatrice, and their children, Milly and Ruth, were visiting family in New York. Upon returning to Erie, however, local police accused Beatrice and a male friend of having an affair and plotting the murder for insurance purposes. The newspapers went wild. When Beatrice and her friend were exonerated, the media followed another possibility: Perhaps Martius’ like-minded Communist friends committed the crime. Without proof, though, that theory also fell through, and the story largely disappeared from print, Dawson said.

Decades after the murder, Dawson interviewed her mother, Beatrice’s daughter, about the circumstances surrounding Martius’ death.

Dawson said her mother told her that Beatrice — who, at the time of the murder was a 26-year- old Jewish immigrant, and not yet a U.S. citizen — went to the mayor and asked him to plead with local officials to find out who killed her husband.

The interaction, according to Dawson, resulted in the mayor leaning over his desk and telling Beatrice, “If you were my own daughter, I would tell you the same thing: It is hopeless to find the criminal. The best thing for you and your children would be to sell your store and get out of here because it isn't safe for you here.”

Beatrice heeded the mayor’s advice and, with her two young daughters in tow, left for Los Angeles.

Dawson knows little about the journey, she said, but according to family history, a community of “upstanders” offered shelter and sustenance along the way. Finally, after reaching California, Beatrice found landsmen, like those in Erie, and started anew with her young brood. “They were received into a similar community in Los Angeles, where my mom was borne into the warmth of solidarity and a family determined to continue it — Yiddish theater and socialism, determination and love. In a sense, I can tell you much of the story because I am a product of this history,” Dawson said. 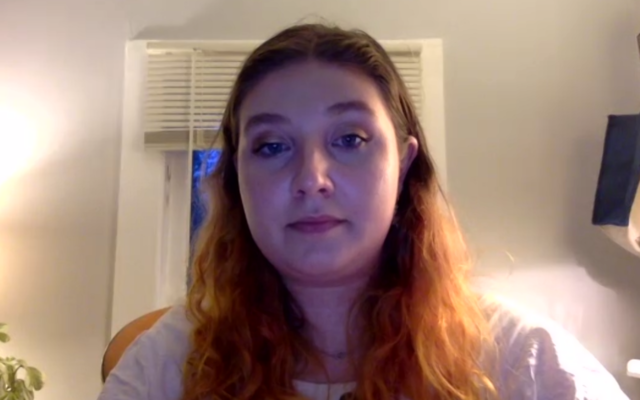 Reading from a 1990 diary entry, Dawson said, “Standing and kneeling beside it and looking behind me to a still wide-open plot of grass, I could feel the presence of the mourners, his comrades and friends, and my grandmother who the paper reports had to be escorted away from the services when she broke down.”

Dawson said the same community that supported her grandmother “was able to sustain her through the rest of her life.”

In turn, Dawson’s grandmother returned the favor — much like she'd done before Martius’ murder. Beatrice, like her late husband, had supported Bolshevik Communist efforts to overthrow Czar Nicholas II. But even after reaching the U.S., the Martiuses maintained political ties. Herman Martius served as treasurer of the Erie branch of the Friends of Soviet Russia, and in that capacity raised money for famine relief within the new Soviet Union, said Claire Rhodes, a Chatham graduate who researched the murder during her time in college.

Rhodes pointed to a report from the Pittsburgh Bureau of Investigation (a precursor to the FBI) and said that the group was tracking the activities of socialists when Martius was killed.

Due to the Red Scare, and the fear of far-left immigrants, “it was a very tense time to be a radical,” Rhodes said.

Citing research conducted by John Craig, a Slippery Rock University professor emeritus of history, Martin said that in June 1921 — a year before Martius’ murder — the Ku Klux Klan sent a recruiter to Pittsburgh who, in turn, sent a recruiter to Erie.

The latter left Erie in February 1922, shortly before Martius’ murder “but he had been actively recruiting for several months,” Martin said. Then in April 1922, the same month that Martius was killed, “the Klan made a public showing in western Pennsylvania with a series of cross burnings.”

Across the United States, there was heightened violence against Jews, and within Erie it was no different, said Zoe Levine, a former Erie resident and Chatham graduate who also researched Martius’ murder during her time in college.

“A lot of this happened due to the ostracization of American Jews by gentile elites, including forcing Americanization onto Jewish Americans,” Levine said.

Even within the free and democratic United States, Martius was in danger because of his heritage and political views.

“We can assume that the increase of antisemitism, nationalism and anti-socialism could have possibly caused this targeted attack,” Levine said.

Martius’ murder remains a mystery and the killer is unknown, Rhodes said, but “I’ll leave it up to your own decision or judgment.” PJC