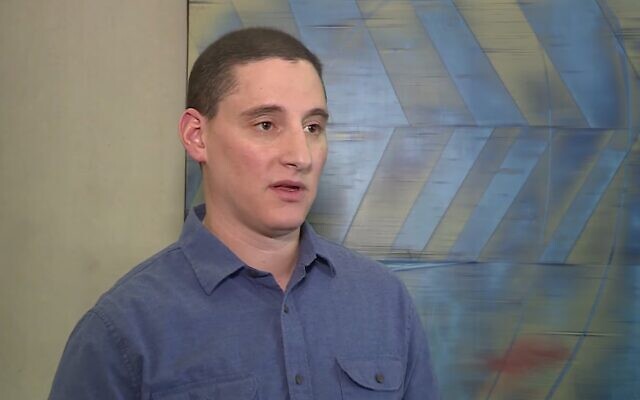 Josh Mandel, interviewing with a local TV station, during his Senate run this year. (Screenshot from YouTube)

(JTA) — A candidate for the U.S. Senate in Ohio ran an ad calling out his opponent Josh Mandel’s Jewishness and defended the spot at a candidate forum Thursday night.

Mark Pukita, an entrepreneur who is one of several candidates vying for the Republican nomination in a crowded primary to replace retiring Sen. Rob Portman, released the radio ad in October. It highlights Mandel’s courting of evangelical voters by touting “Christian values.”

“Are we seriously supposed to believe the most Christian values Senate candidate is Jewish? I am so sick of these phony caricatures,” a voice says in the ad.

Mandel, who emphasized his Jewishness in his run for Senate in Ohio in 2012, has moved farther to the right in his current campaign and has repeatedly pointed to his “Judeo-Christian values” in a bid to attract evangelical voters. The home page of Mandel’s campaign website feature a picture of a church steeple topped with a cross and declares that Mandel is “Pro-God.”

When asked by a moderator at a campaign forum Thursday night to respond to claims that he is “antisemitic and intentionally divisive and inflammatory,” Pukita defended the ad.

“In terms of antisemitism, all I did in an ad was pointed out that Josh is going around saying he’s got the Bible in one hand and the constitution in the other. But he’s Jewish,” he said, according to Politico. “Everybody should know that though, right?”

Mandel seemed to respond to Pukita in a tweet Friday.

The “Judeo-Christian ethic separates itself from Islam and atheism and all these other belief sets on so many levels, but one of the main levels is our acknowledgment of good vs. evil,” Mandel said at a recent debate.

In 2010, Mandel ran and then dropped an ad insinuating that his Black political opponent was a Muslim. PJC