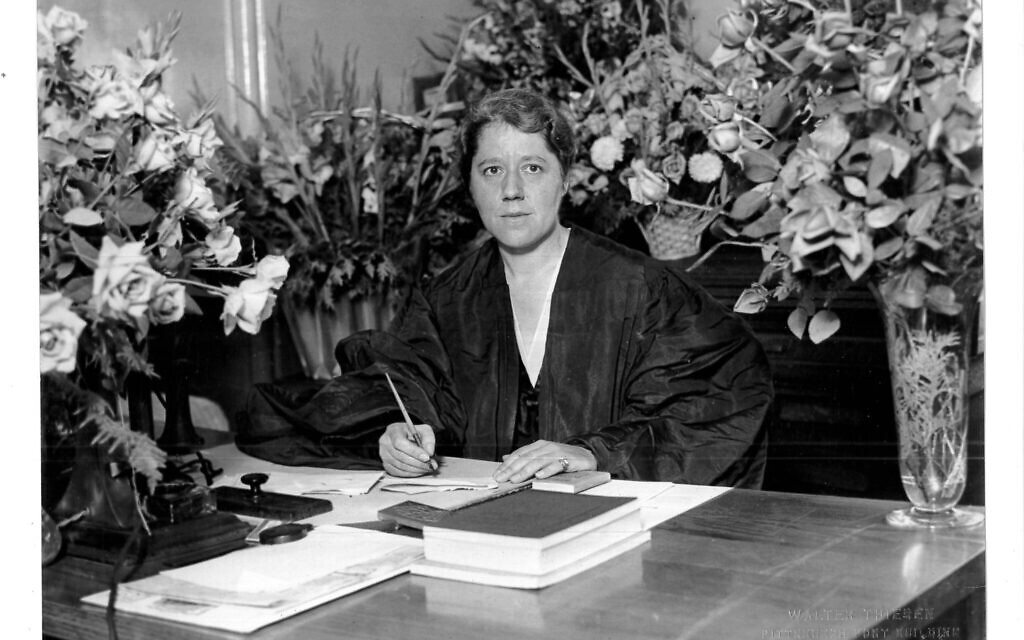 Judge Sara Soffel was the first female jurist in Pennsylvania. She opposed the blue laws but was unable to overturn them during a 1934 case against Hill District merchants. ( Image courtesy of the Detre Library & Archives at the Heinz History Center)

On Sunday, Aug. 20, 1933, a group of men entered Abraham Dobkin’s grocery store in the Hill District and tossed stink bombs onto his goods. Over the following week, Dobkin was arrested, arraigned, fined and jailed. His crime was violating the blue laws.

Those laws were first enacted in Pennsylvania in 1794. They prohibited “any worldly employment or business whatsoever on the Lord’s day, commonly called Sunday, works of necessity and charity only excepted.” The blue laws weighed heavily on Jewish peddlers and merchants in Pennsylvania for more than 150 years. They made it hard to earn a living and even harder to observe Shabbat, commonly called Saturday.

What is remarkable about the story is that it is not immediately an account of antisemitism. Dobkin was Jewish, of course, but so were the men who accused him of violating the blue laws, as were the men in the mob who stink bombed his goods.

The organization that brought the blue laws charges against Dobkin was the Hill District Marketing Association (or something like that—the name changes from account to account). It was the second blue laws charge brought by the group against a local Jewish merchant that summer. But the Association was not created to impose Christian values upon the Jews. It was trying to enforce the National Industrial Recovery Act.

President Franklin Roosevelt signed that act into law in June 1933 in an attempt to improve the economy during the Great Depression. It asked businesses to reduce hours as a way to spread work across more people. Enforcement relied on peer pressure. Participating businesses displayed a National Recovery Administration poster with its Blue Eagle logo.

The Hill District Marketing Association said it had convinced 70% of the businesses in the neighborhood to close on Sundays in an effort to comply with NRA code. By staying open, Dobkin was harming those participating businesses. With no enforcement mechanism available, the Association took a sideways approach: It revived the old blue laws. (The Association claimed it had no role in the stink bombing.)

Dobkin insisted he wasn’t violating NRA code because he had no employees. He ran the shop with his wife and their four youngest children, ages 6 through 14. He said that many people in the Hill District lacked refrigeration and needed Sunday shopping.

The case against Dobkin was dismissed on a technicality. The Association adjusted its approach and brought blue laws charges against nine more merchants.

Those charges came as Pennsylvania was weakening the blue laws. The Sunday Concert Act allowed musical performances. A voter referendum allowed Sunday athletic events throughout most of the state. Another proposal moving through the political process would have allowed Sunday night movies. What remained illegal was business.

The second round of cases came before Judge Sara Soffel in December 1933. She opposed the blue laws, but her dismissal rested on the idea that they were being used disingenuously. “There is apparently a racket to compel one group of merchants to comply with the judgment and decisions of another group,” she wrote in her decision.

In a statement, the Association returned the blame to the offending business owners. “We have been keeping our stores closed on Sunday for the past six months at great expense and suffering and many hardships due to the fact that the people we have prosecuted stay open to enjoy business belonging to somebody else,” the statement read.

The fight kept escalating. At the start of April 1934, city police went store to store through the Hill District announcing that any merchants who remained opened on Sundays would be arrested on blue laws violations. (An exception was made for pharmacies, restaurants and kosher butchers.) The police claimed they were acting on a request by the Hill District Marketing Association, which denied any involvement.

It might have kept going that way. But by then, the National Industrial Recovery Act was being challenged in federal court. It was ultimately abolished in 1936. The blue laws remained on the books, but they went back to being just a normal nuisance, rather than a special club that neighbors could use to beat their competitors over the head. PJC