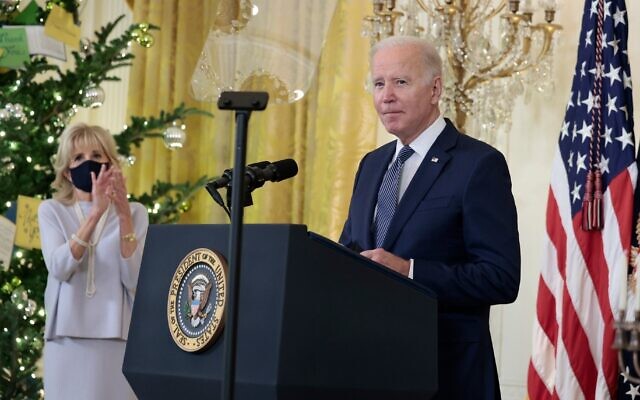 President Joe Biden delivers remarks before a menorah lighting ceremony in celebration of Hanukkah in the East Room of the White House, Dec. 1, 2021. (Anna Moneymaker/Getty Images)

WASHINGTON (JTA) — President Joe Biden is bringing a Jewish High Holiday celebration to the White House for the first time.

His White House is hosting a Rosh Hashanah reception on Sept. 30, Jewish Insider reported on Monday.

As vice president during the 2009-2017 Obama administration, Biden hosted Rosh Hashanah and Sukkot receptions at the Naval Observatory, the official vice presidential residence, the first vice president to do so.

President Bill Clinton was the first president to host a Hanukkah party for staff, and President George W. Bush made it a public event for Jewish community leaders, a practice continued by President Barack Obama and President Donald Trump. Obama instituted White House Passover seders, a practice Trump did not continue, although on at least one occasion, Jewish staffers gathered in the adjacent Eisenhower Executive Office Building for a seder.

The Biden White House last year hosted a last-minute Hanukkah menorah lighting in person but has otherwise limited its Jewish events to virtual offerings because of the coronavirus pandemic.

Last year, Kamala Harris and her husband Douglas Emhoff — the first Jewish spouse of a president or vice president — lit a menorah at a window at the Naval Observatory, another first, and this year Harris and Emhoff held a seder at their residence for family and Jewish staffers. Harris and Emhoff are also the first executive family to affix a mezuzah to their official residence.

The White House did not respond to a question about whether it would hold a Hanukkah event this year.

Presidents have for years routinely briefed Jewish leaders in conference calls before the High Holidays. PJC