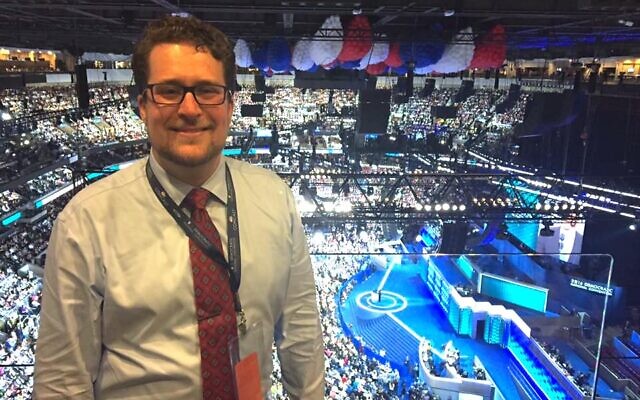 Dan Siegel, 32, didn’t have to say much during the Zoom-based launch of Pennsylvania’s Jewish Americans for Biden’s outreach program on Sept. 3, as his more well-known co-speakers spelled out the case that he’ll be making in the months to come as the new Jewish outreach director for Joe Biden’s Pennsylvania campaign team.

Siegel, who lives in Philadelphia, will have his work cut out for him.

The Biden campaign has expanded its faith-based outreach in recent weeks, according to The Washington Post. Yet not every person charged with making such appeals is based in the campaign headquarters’ city that is, in turn, inside of a crucial swing state that voted for Donald Trump in 2016.

“Man, as an organizer by training, I’m overwhelmed by it,” Siegel said. “But as a member of this community, I feel empowered by the task.”

They spoke about Biden the Vocal Opponent of Anti-Semitism, Biden the Tough But Fair Friend of Israel and Biden Who Cares About the Things That You Care About. No Biden was more frequently invoked than Biden the Mensch. The campaign’s origin story, wherein Biden resolved to run in the wake of the Charlottesville, Virginia, marches, was also discussed. Outside of Shapiro’s portion of the panel-style event, led by Solomon, Trump was largely absent.

That rhetorical mix, Siegel said, is just what he hopes to get out to voters between now and November. Trump’s record, he believes, speaks for itself when it comes to most Jewish voters, and harping on it will have limited utility. Therefore, the focus will be on the Democratic candidate himself.

“What I think we need to do,” Siegel said, “is remind people that he is the person we need, not just on Israel, but on the other multitude of values that Jewish Americans vote on, care about and live every day.”

Siegel is no Johnny-come-lately to the Biden orbit, nor to Jewish voter outreach in Pennsylvania.

In 2010, just out of the University of Rochester, he was hired to work on Chris Coons’ Senate campaign in Delaware. Because the world of Democratic politics in Delaware is so small, Siegel and the campaign saw a lot of then-Vice President Biden, as well as his son Beau, who was the attorney general. That successful effort convinced Siegel to stick with campaign work and, in 2012, he corralled Jewish voters for Obama in Montgomery County outside of Philadelphia.

He recalls with pride an event at Congregation Kesher Israel with then-Democratic National Committee Chair Debbie Wasserman Schultz that outdrew an event that same night in Philadelphia that featured Alicia Keys and then-First Lady Michelle Obama. If he was just wading in before, he had now fully immersed himself in Democratic electoral politics.

Part of the reason for that full immersion was that Siegel found compelling and frequent overlaps between what was important to him politically and what was important to him as a Jewish person. To him, Jewish political action in America is “the tide that lifts all ships,” bringing gains to others in their fight to improve their own lot. In the Biden campaign, Siegel believes he’s found a candidate who exemplifies such an approach.

Siegel spent time as deputy regional director for J Street in Pennsylvania and New Jersey before he left for Dover Strategy Group, a communications firm where he remained until a few weeks ago. A phone call from the Biden campaign’s Pennsylvania state director, Brendan McPhillips, brought him aboard.

As the election draws near, Siegel will work to convince Jews across Pennsylvania of the same vision for a Biden presidency that he and everyone on the launch event articulated. Trump won Pennsylvania’s 20 electoral votes in 2016 by fewer than 45,000 votes, and Siegel intends to reverse the result.

“We fight for equity, because we know it’s good for everyone, and therefore us,” Siegel said. “And we see that in Joe Biden, and we get excited about somebody who is going to fight the good, hard fight.” PJC