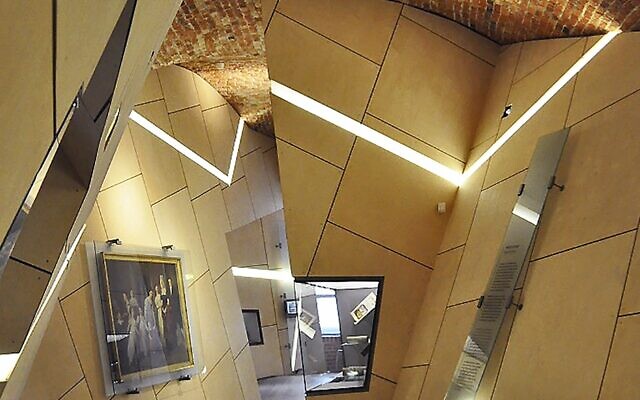 The interior of the Danish Jewish Museum, in Copenhagen (Photo by Joel Levinson)

The Daring Diagonal Virtual Museum, an online collection of photos and writings concerned with historically significant expressions of diagonality in art and design, launched on Dec. 3.

For Joel Levinson, the founder and curator of the DDVM, it’s the culmination of the curiosity he’s harbored since he was a student of architecture at the University of Pennsylvania nearly 60 years ago.

Though the museum is primarily intended to provide historians with what Levinson believes is a crucial intervention in the study of architecture and design, the DDVM might just have something for everyone.

“I hope that readers of all stripes will see the world in a different way,” said Levinson, founder of the architecture and interior design firm Joel Levinson Associates.

Though Levinson has long dreamed of creating some sort of archive of his collected material on diagonality, it was only about two years ago that the current iteration started to come together. A well-received lecture on the subject to a group in Germantown connected him with the physicist Kenneth Ford, who enthusiastically offered to edit any material that Levinson had into a book.

While the material for the book was being selected and arranged, Levinson created a website to host it all for public consumption. That website was eventually converted into the DDVM.

Coincidentally, Levinson’s drawings, correspondence and models are in the midst of being collected for publication as separate book by the Architectural Archives at the University of Pennsylvania.

The structure of the website that “houses” the museum is based on Levinson’s own design, mimicking the layout of a stately home built by Levinson many years ago. Each of the “rooms” are home to webpages covering individual aspects of diagonality, complete with plenty of photographed examples, often by Levinson himself. One can jump from 1.12 (Works by Children) to 3.5 (Fashion) with a few clicks of the mouse, and there’s enough material for one to spend hours wandering the digital halls.

Levinson is 82 and a native of Philadelphia. Born and raised in Strawberry Mansion, Levinson’s family moved to Mt. Airy when he was still a boy, where the spitball-firing Levinson spent more time in the principal’s office at Germantown Jewish Centre than he did in the classroom. His highest aspiration in those days was to be a farmer or a writer. 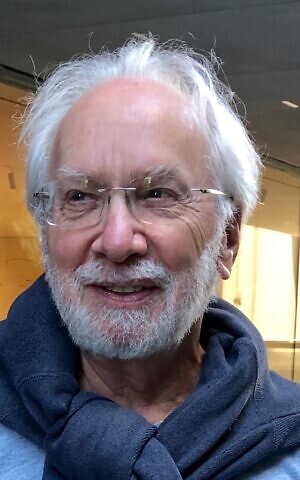 Informed by his father that farming and writing were out of the question, and presented with a list of acceptable professions, Levinson landed on architecture at 13. Though the other personae pop up from time to time — he cultivated a small vegetable garden in his youth, and later wrote a novel about the Bosnian war — it’s been a lifetime of thinking about buildings.

Entering Penn in 1957, Levinson had already developed a bit of an iconoclastic sense of self, he said. Coming from a line of rabbis on one side and Bertrand Russell-reading skeptics on the other, it was only logical that Levinson’s architectural interests might become uncategorizable. Levinson first became interested in what he calls the “phenomenon of diagonality” around 1960. Diagonal lines, in Levinson’s estimation, were much more than met the eye. Everywhere he looked, he saw them, and not just in the buildings he studied. They were in paintings and sculptures, chairs and graphics, products galore. It gnawed at him: How could something so fundamental be discussed so little?

“It became apparent to me that there is a big story here,” Levinson said.

Ever since, Levinson has tried to make up for the gaps in the scholarship. His theory of diagonality encompasses design elements from antiquity to today, and art forms both high and low.

Eventually, Levinson said, material he’s been gathering for decades will lead to a book, “The Daring Diagonal,” for which there is already a preface, introduction and “a critically important chapter dealing with the right angle in architecture.”

If this all sounds like it borders on the marginal or quixotic, it wouldn’t take long for Levinson to persuade you and make you think twice the next time you see a triangle. Even the distaste he holds for symmetry in design could get your brain moving.

For Levinson, architecture is a way to look for truth — both a mode of inquiry and the answer to questions, some urgent, some idle.

“There is a difference between what we observe, and what underlies that in reality,” Levinson said. “These rather abstract ideas become expressed in my architecture — not in an academic way, I’m not trying to teach anybody anything — but they’re just part of my thought process, and they are embedded in my architecture.” PJC

Jesse Bernstein writes for the Jewish Exponent, a Chronicle-affiliated publication.