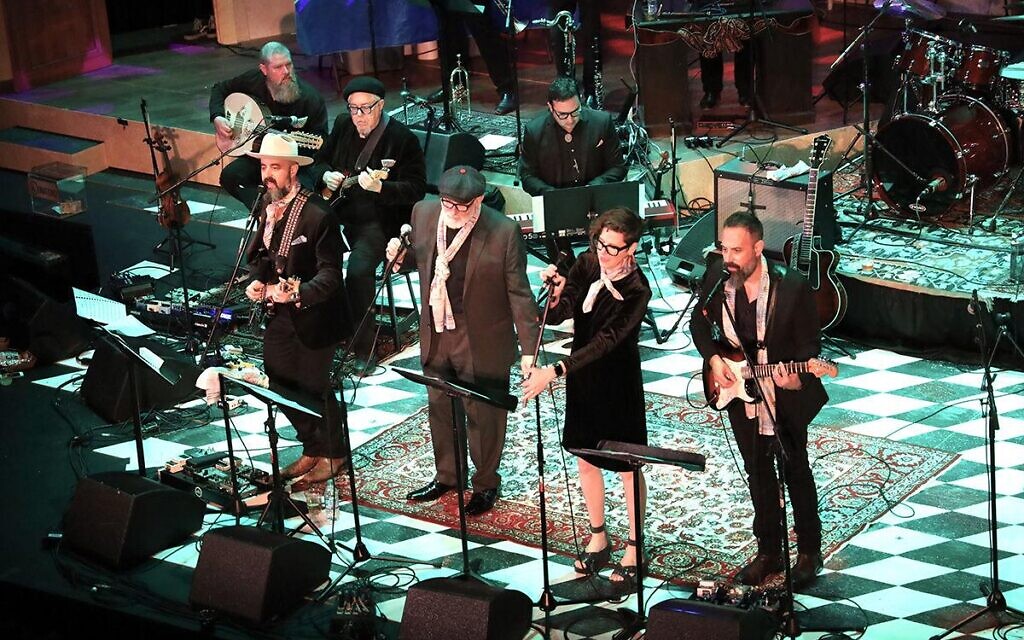 Brothers Lazaroff and a host of special guests including Rabbi James Stone Goodman perform at the ninth annual Hanukkah Hullabaloo on Saturday, Dec. 14, 2019, at the Grandel Theatre. (Photo by Bill Motchan)

In the “time flies” category, can you believe it’s been 10 years since the Brothers Lazaroff launched their first Hanukkah Hullabaloo? What began as a humble holiday after-party following a Kinky Friedman concert in 2011 has grown into a must-attend Chanukah event, with dozens of musical luminaries and fried latkes to boot. So don’t go thinking an annoying global pandemic is going to keep the Brothers down.

The 10th Annual Brothers Lazaroff Hanukkah Hullabaloo, dubbed “A Virtual Miracle,” will take place on Saturday, Dec. 12 at 8 p.m. EST / 7 p.m. CST. Brothers Jeff and David Lazaroff plan to broadcast “live” from the backyard around the bonfire. They’ll be joined by special celebrity guests and Hullabaloo regulars, as well as the annual recitation of “Eight Nights,” a series of poems by Rabbi James Stone Goodman set to experimental and funky eastern European folk jams by the Eight Nights Orchestra.

And while participants won’t be able to sample the goods in person, the Brothers’ wives still will be frying up latkes as DJ Boogieman mans the giant menorah.

“Even for us, the ritual of it has become such a cherished tradition every year. We wanted to deliver it and felt like we could give something to the community that would be fun,” said Jeff Lazaroff. “One of the big differences this year is that because of the pandemic, we have national artists joining us. Usually this is such a busy time of the year with musicians touring. But since that is not going on, we are able to have some of them join us.”

In addition to their ‘ole pal Friedman, the Brothers are welcoming other celebrity guests virtually, including:

• Jeff Tweedy of Wilco fame, who will be contributing a song

• Jo Firestone, comedian and writer for “The Tonight Show with Jimmy Fallon”

Tickets are available at https://bit.ly/Hanukkah-Hullabaloo2020 and cost $10; $20 if you’d like to receive a 10-year Hanukkah Hullabaloo commemorative poster. The same link will be used to view the show as well. All proceeds will go to organizations helping venues and musicians navigate the pandemic. PJC

This article was originally published in the St. Louis Jewish Light.