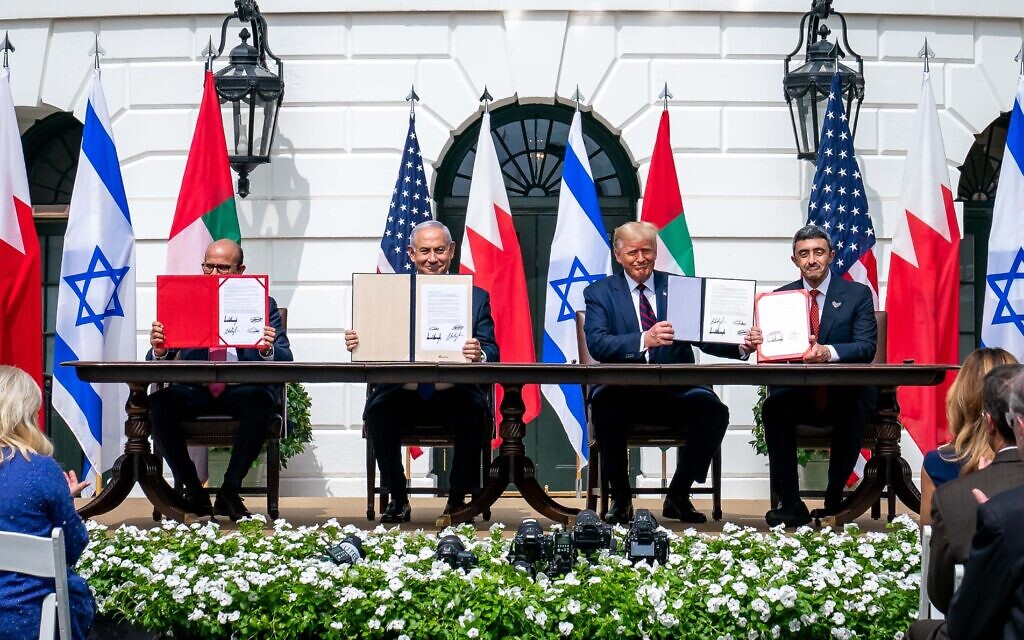 New peace deals, like those between Israel and the United Arab Emirates offer new hope for peace in the Middle East. (Official White House Photo by Tia Dufour)

Hazard a guess where anti-Semitism is disseminated to a greater extent today than in any other medium. It is unlikely to be social media, nor wildly popular TV stations in the Arab world.

The intensity has varied from country to country, but the central themes are consistent: the canards that Jews tried to kill the Prophet, that they control the global economy, media and politics. The conspiracy theories that Jews are the reason Germany lost the First World War and are to blame for the rise of the Nazi Party. The age-old fallacy that Jewish leaders met and agreed to kill Jesus, they are immoral and corrupt, are warmongers, inherently treacherous, and betrayers. The lie that Zionism was established in an effort to take over and rule the world, and that Zionists intentionally set fire to the al-Aqsa Mosque.

Anti-Jewish racism infected the Arab and Muslim world so successfully and so completely, that people from the region who hold tolerant, anti-racist attitudes to Jews are outliers. Arab and Muslim Jew hate has melded with anti-Semitism in the U.S. and Europe. They share often indistinguishable tropes, which have become rife on chatgroups, campuses, academia, in labor movements, political parties and wider communities.

But it does not have to be this way.

Research by the Institute for Monitoring Peace and Cultural Tolerance in School Textbooks shows that there have been recent improvements in textbooks across the Middle East and North Africa region. In the UAE, Sheikh Mohammed bin Zayed bin Sultan Al Nahyan reformed the school curriculum that had been authored by the Muslim Brotherhood. It is now quite remarkably different, teaching tolerance and peacemaking. In Tunisia, textbooks educate about the importance of negotiations, peace and respect for the Other.

In some countries, positive changes to textbooks have been made and they offer the promise of greater and more wide-ranging improvements. Jordan’s King Abdullah took control of the Muslim Brotherhood-authored curriculum in the face of demonstrators outside his Royal Palace. He oversaw the completion of a root-and-branch change to Islamic textbooks. Diversity is now a central theme, Islam is presented as a culture of life. Unfortunately, the Jordanian curriculum is far from perfect: the view of Israel is a real cause for concern. And we know that in Morocco, King Mohammed VI has instituted the teaching of Moroccan Jewish history.

Of course, some extremist actors will not be open to veering off their hateful course. Iranian textbooks are committed to a total struggle until the coming of the Mahdi. The Syrian curriculum presents a radical Baathist approach and the Palestinian curriculum rejects peace in favor of Jihad, martyrdom and the sacrifice of young schoolchildren.

Sadly, the vast majority of schools in the Middle East and Asia are still teaching hate. But change is a real possibility.

IMPACT-se’s report into the Saudi Arabian curriculum in January highlighted dozens of offending examples of hate which needed to be removed and was presented to the highest levels in the Kingdom. In September, the country had made significant improvements. Much incitement, anti-Semitic and anti-Israel material has been removed. The majority of Jihad-related content is no more, and homophobic material has been eliminated. There is a great deal more to be done with these textbooks and much entirely unacceptable material remains, but these positive changes are encouraging.

Today, nearly half of the population of the Arab world is under the age of 24. In other words, the future of the Arab world is currently sitting in schools, digesting the curricula being taught. We can help moderate how Jews and Israel are perceived across the Arab and Muslim world through a change in school textbooks, undoing decades of hate education and replacing it with values of tolerance.

There is at this very moment a window of opportunity to slow down and ultimately put a stop to hundreds of millions of children learning to hate Jews from first grade. It is no small task to unravel hate education delivered to millions of children. But there is perhaps no more important task. The opportunity has now arisen to stop it before it starts.

The Abraham Accords and other positive changes taking place in the Arab world present the opportunity to engage with curriculum developers in the region. Tolerance of Jews and the acceptance of Israel’s place in the Middle East can become the norm in textbooks from Morocco to Asia. What is required is professional and culturally sensitive curriculum research, the understanding of where problems lie, cooperation with partners, the willingness to teach alternative content and the authority to drive change — and to build a more tolerant and better future for our region. pjc

Marcus Sheff is CEO at The Institute for Monitoring Peace and Curtural Tolerance in School Textbooks.