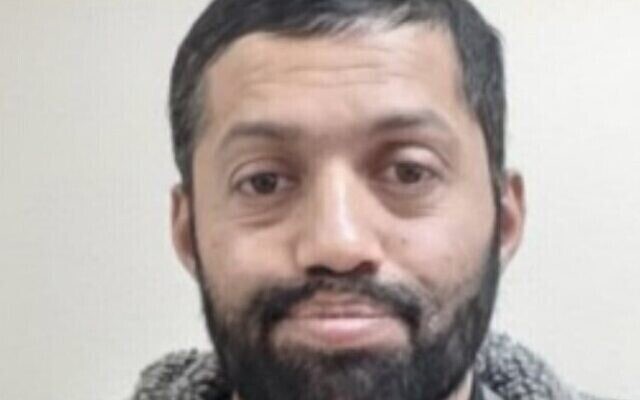 COLLEYVILLE, Texas — FBI Special Agent Matthew DeSarno was not speaking off the cuff on Saturday evening when he commented on the motive of the gunman who initiated an 11-hour hostage crisis at Congregation Beth Israel in Colleyville, Texas, earlier that day.

“We do believe from our engagement with this subject that he was singularly focused on one issue, and it was not specifically related to the Jewish community,” he said at a briefing near the US synagogue from which the final three of four hostages managed to exit unharmed roughly an hour earlier.

The remark surprised some of the reporters present, who again inquired about the attacker’s motive later on in the press conference.

But DeSarno held his ground — this time more assertively.

“I’m not ready to add any more about the demands set [by the hostage taker], except that they were specifically focused on one issue that was not specifically threatening to the Jewish community,” he said.

And that was that. The FBI had staked out a clear position that the attacker — later identified by authorities as 44-year-old Malik Faisal Akram — had acted solely out of a desire to release Aafia Siddiqui, a Pakistani national imprisoned at Carswell Air Force Base, roughly 15 miles southwest of Colleyville.

Yet, when US President Joe Biden reflected on the hostage crisis on the sidelines of an event in Philadelphia on Sunday morning, he offered a seemingly contradictory message to that of the FBI.

“This was an act of terror, and it not (emphasis added) only was related to someone who had been arrested… 15 years ago,” he said right off the bat.

While the FBI insisted that Akram was “specifically focused on one issue,” Biden was just as clear that the attacker had multiple agendas.

The discrepancy was one of several that are beginning to cloud the public’s ability to understand what unfolded at Congregation Beth Israel (CBI) on Saturday both during and after the livestream went down.

Asked to clarify the apparent contradiction between Biden and the FBI, the Justice Department declined to do so, referring to an ongoing investigation into the matter. The FBI issued a lengthy response to The Times of Israel late Sunday evening that appeared to backtrack slightly from DeSarno’s remarks but did not reference them directly.

It went on to note Akram’s repeated mentions of Siddiqui and noted that she is currently serving an 86-year sentence “on terrorism charges.”

“This is a terrorism-related matter, in which the Jewish community was targeted, and is being investigated by the Joint Terrorism Task Force,” the FBI added, drawing closer to Biden’s characterization of the incident but not directly contradicting DeSarno’s comment that Akram’s sole motivation was freeing Siddiqui.

While acknowledging that much remained unclear, Biden referenced “antisemitic and anti-Israeli comments” made by Akram as he held the CBI worshipers at gunpoint, at the very least allowing for the possibility that the attacker had underlying motivations in choosing a synagogue as the setting for the hostage situation.

But these details, too, were not included in the FBI’s more guarded assessment of the crisis.

As the shockwaves that reverberated through American and global Jewry slowly began to fade, it was becoming easier to notice the competing interpretations of what took place at CBI even within the community.

While Biden and a relatively wide array of Jewish groups issued statements that referred to the harrowing ordeal as an act of antisemitism, the synagogue targeted by Akram almost defiantly refused to do so.

“It is important to note that this was a random act of violence,” CBI President Michael Finfer said in a statement released together with Rabbi Charlie Cytron-Walker, who was one of the four hostages held by Akram.

“Indeed, there was a one in a million chance that the gunman picked our congregation,” Finfer added, apparently falling in line with the FBI’s assertion that the incident “was not specifically related to the Jewish community.”

Those who caught the Facebook Live video, which was meant to broadcast CBI’s Sabbath morning services, could have easily been convinced of the synagogue leadership’s stance that it had fallen victim to a “random act of violence.”

“They let me in. I said ‘Is this a night shelter?’ and they let me in, and they gave me a cup of tea, so I do feel bad,” Akram could be heard saying between unintelligible rambling.

“I like the rabbi. He’s a good guy, I bonded with him, I really like him… I’ve only been here for a couple hours, but I can see he’s a good guy,” Akram added.

This and whatever else went on during those long hours at Congregation Beth Israel may have been enough to convince the Reform synagogue that it had fallen victim to a “random,” “one in a million” ordeal, but the head of the Reform movement was not persuaded.

“There’s no doubt that the underlying whole premise of yesterday was antisemitism,” Union for Reform Judaism President Rabbi Rick Jacobs told MSNBC in a Sunday interview. “The hostage-taker didn’t go to McDonald’s, didn’t go to some random place, and that is part of the story of antisemitism, to single Jews out.”

“I don’t know one Jewish person who’s in the dark about yesterday’s antisemitic attack,” Jacobs continued. “Obviously it’s important to know what we’re discovering about the hostage-taker, but the truth is, on a Sabbath morning, a community gathered in prayer… somebody come in bent on harm. That is hardly something we would call just an incidental detail. That is a focal point.”

The Reform movement leader then went after DeSarno even more directly and drew a wedge between Biden and the FBI. “We’re very grateful that President Biden was right on point, other federal authorities have been right on point. But [what] was stated yesterday by that FBI special agent… conveys a completely wrong sense of what yesterday was all about.”

Had MSNBC caught Cytron-Walker and Finfer’s joint statement released minutes before the interview, the network would have had a unique opportunity to push Jacobs to denounce not just the stance of the FBI, but that of the very synagogue targeted in the attack that brought him on air in the first place.

Further contributing to the confusion as a full day passed since the hostage crisis concluded were the limited number of details being released by the FBI, which allowed for rumors to mix with what may well be accurate accounts of what was heard on the livestream.

Akram was heard describing Siddiqui as his “sister.” A number of networks understood him to be speaking literally and identified the gunman as Muhammad Siddiqui.

The FBI didn’t confirm or deny the matter, and it fell to Muhammad Siddiqui’s lawyer to release a statement saying his client was nowhere near the scene of the crime.

In announcing an end to the crisis on Saturday night, the FBI reported that the gunman was “deceased” and the hostages were “safe.”

Twelve hours later, it was Akram’s family who revealed he had been killed in a firefight with the FBI’s Hostage Rescue Team.

Several hours after that, Cytron-Walker in his joint statement with Finfer described how he and the other two hostages “fle[d] when the situation presented itself.”

Asked to clarify whether the suspects escaped or were freed by the gunman, as indicated by other officials and the attacker’s family, Jennifer Farmer, whose Spotlight PR firm released the CBI statement, told The Times of Israel, “They escaped.”

“I am not at liberty to discuss more because there is an active investigation,” she added.

However, FBI Public Affairs Officer Katie Chaumont told The Times of Israel that “there aren’t any FBI restrictions that would prevent [former hostages] from speaking.” PJC