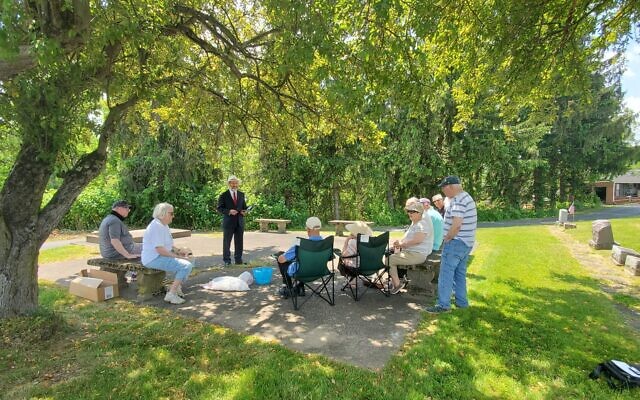 Rabbi Howie Stein and members of B'nai Israel met to bury prayer books no longer in use. Photo by David Rullo.

A dozen members of Temple B’nai Israel braved the midday heat on May 23 to mark a transition for the congregation.

The White Oak Reform congregation gathered at its cemetery in Versailles to bury old prayer books, damaged tefillin and other Jewish items.

But unlike several other congregations in the Mon Valley that have performed similar rituals, B’nai Israel isn’t closing and wasn’t meeting to perform one final act as a congregation. Instead, as Rabbi Howie Stein noted, the rite pointed to the stability of the temple.

“We have new books that we use,” Stein said prior to the service he developed for the event. “We continue to pray and study and use the texts. This is a sign that we are moving forward.”

Joel Kaufman, the congregation’s ritual chairman, said the tradition of burying books and other Judaica no longer in use isn’t preformed as often as it once was, but nonetheless, “it’s the custom. It’s intended to show honor to our sacred texts.”

The congregation collected over 70 boxes and bins of items to be buried in the cemetery surrounded by tombstones — not only of those marking the graves of members of B’nai Israel, but also the neighboring Orthodox Gemilas Chesed Synagogue, the defunct Tree of Life in McKeesport, unaffiliated community members, as well as shuttered congregations in Glassport and Clairton.

Ron Kendal, B’nai Israel’s cemetery chair, can recount the families, including his own relatives, buried in the cemetery, and noted the loose membership patterns of the area’s tightknit Jewish community: When one synagogue closed, the next generation would attend services at a neighboring congregation.

Despite the loss of population experienced in the Mon Valley and surrounding communities, B’nai Israel still counts close to 100 families as members, even though some of those members now live out of state. Stein was hired by B’nai Israel in 2020.

The rabbi said he wanted the service he created to have an optimistic tone because, even though books are being buried in a cemetery, it isn’t a funeral.

“There should be an element of hope,” he told participants, “that this is just an element of the history of our congregation.”
He opened the service, which included readings from the Talmud, Tanakh and Psalms, by asking participants what books they would enter a burning building to save — making a distinction between the sacred and the mundane.

The readings he selected for the service focused “on the significance of the books,” Stein said.

After the readings, congregants filled the grave with the prayer books and other Judaica and helped to shovel dirt over the items.
Stein concluded the brief service by reciting the Rabbis’ Kaddish, a prayer he said was more hopeful than the Mourners’ Kaddish.

Prior to the service, several members of B’nai Israel helped to ready the cemetery’s tombstones for Memorial Day by putting new American flags on the graves of deceased veterans, a task they perform each year.

“It was so wonderful to see members of the congregation,” Kaufman said. “We’re a very close congregation. There’s a lot of care here, which is why I joined and stayed.” PJC