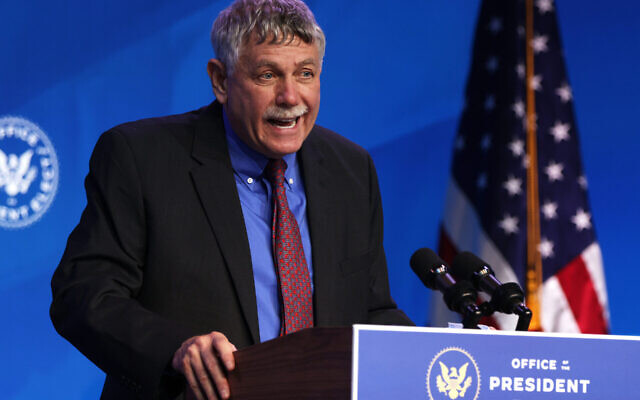 Eric Lander, a renowned geneticist, was nominated in Jan. 2021 to lead the Office of Science and Technology Policy. (Alex Wong/Getty Images)

(JTA) Eric Lander, the Jewish geneticist who served as President Joe Biden’s top science advisor and head of the Office of Science and Technology Policy, resigned Monday after a White House review found he had mistreated staff.

Lander had been confirmed by the Senate in May 2021 as director of the OSTP, a position Biden raised to the level of a cabinet position. Lander was sworn in last June on a 500-year-old edition of Pirkei Avot, the Ethics of the Fathers, printed in 1492.

The internal review that led to Lander’s resignation found that the scientist had bullied staff and sometimes yelled, according to a report in Politico. Several women who worked with Lander complained that he had demeaned them. In an email to staff Friday, Lander apologized and admitted that had “spoken to colleagues within OSTP in a disrespectful or demeaning way,” according to Politico.

In a letter to Biden Monday, Lander said he would vacate the position no later than February 18, according to the Washington Post. Biden faced some criticism for accepting Lander’s resignation rather than firing him immediately after pledging on his first day in office that disrespect in the workplace would warrant immediate firing.

“If you are ever working with me and I hear you treat another colleague with disrespect, talk down to someone, I promise you I will fire you on the spot. On the spot — no if, ands or buts,” Biden said at the time.

Lander’s behavior in the workplace as outlined in the White House review was not the first time Lander’s treatment of others had drawn criticism in the scientific community.

In 2016, Lander wrote an essay on the history of the gene editing technology CRISPR in which critics said Lander failed to give credit to two women scientists who were central to its development, a move he later said he regretted.

Lander was also heavily criticized in 2018 after he gave a birthday toast to James Watson, a molecular biologist and geneticist who discovered the double-helix structure of DNA and has expressed sexist, racist and antisemitic views in his later years. Lander later apologized for the toast and noted that he had himself been the target of Watson’s antisemitic remarks, according to Stat News.

Before assuming his position in the Biden administration, Lander was the president and founding director of the Broad Institute, a research institution based at MIT and Harvard that focuses on biomedical research. He rose to scientific fame for his leading role in the Human Genome Project, an initiative that mapped the entire human genome sequence from 1990 to 2003. The Broad Institute grew out of the Human Genome Project and also played a major role in developing CRISPR. PJC