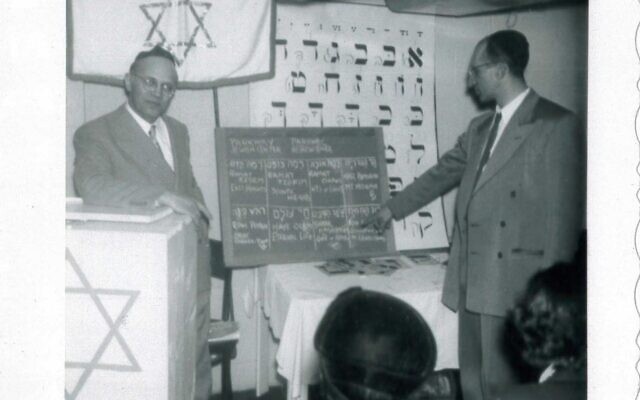 On Sunday, May 12, 1907, at least 147 people crowded into the Hirsch-Baskin Co. store at Sandusky and Ohio streets in Allegheny, Pennsylvania. to decide who they would be.

They had been meeting for years as an informal prayer group. They had recently resolved to form an actual congregation, one with a charter, a synagogue, a religious school and a sisterhood. They had sent out invitations to an organizational meeting. It was set for a Sunday, presumably so the merchants could get away from their shops. At the meeting they planned to elect officers. And of course, they needed to choose a name.

The minutes report the following deliberation: “Two names were proposed: Ahava Sholem and Beth Israel. The name of Beth Israel, being the choice of the majority of members, was selected.” That’s all we know. Why those two names? Was the debate heated? About all that, we can only theorize. Articles from the dedication of the Beth Israel synagogue in September 1907 merely list the speakers, without deeper analysis.

A nearly identical scene occurred 47 and a half years later, in a basement in the Eastmont subdivision of the eastern suburbs of Pittsburgh. Recent arrivals to the area had been gathering for about five months in the home of Harry Katz and were evolving into a congregation. They initially called themselves Eastmont Hebrew Congregation, but they had begun attracting people from Churchill Manor, Churchill Valley, Blackridge, Monroeville, Forest Hills, Crescent Hills and Penn Township. They needed a new name.

They sent out an invitation. It was for Saturday, Dec. 25, 1954, Christmas night, and so once again, everyone was able to get off work. They packed the basement.

This time, we know what happened next. In a scrapbook of the congregation is a photograph showing two men standing at the front of a makeshift sanctuary. Inches above their heads are joists, air ducts and fluorescent lamps. One man leans on a lectern with a Star of David. This is Rabbi Pinchas N. Gross, who had recently accepted the pulpit of the congregation. The other man points at a chalkboard. This is Harry Katz, who grew up in a family hardware store in Canonsburg and later became a successful exterminator.

Again, you might wonder why the name was chosen. Perhaps it was a reference to the first Jewish congregation in the region, Shaare Shemayim, founded in 1848. You could see how the early pioneers would have been an inspiration to the Eastmont group.

But this time we have an answer. A newspaper article pasted into one of the congregational scrapbooks explains that the people crowded into the Katz’s basement that Christmas night had been inspired by a Friday night sermon given by Rabbi Gross a few weeks earlier. He had been talking about the dream of Jacob’s Ladder. “How poor is a human being who does not possess the power of dreaming!” Gross said. “The House of God we are planning to establish in Eastmont will, if you please, also serve to nurture our dreams for the higher ideals of our Torah and of mankind. Here we shall endeavor to push aside our daily worries and our petty problems and strive to bring down Heaven to earth. This shall be a ‘Shaar Ha-shamayim,’ a Gate of Heaven, for our supplications to ascend to our Heavenly Father and bring down to us His guidance and His blessings.”

So much of what we know about the past is circumstantial. Both congregations saved things, but what they saved was not entirely in their control. Cameras were novel in 1907 and commonplace by 1954. One newspaper wrote long while another wrote short.

Documentation today is both ubiquitous and fleeting. Your phone is a powerful device, but who hasn’t lost years of photographs, texts or emails? Think the internet is permanent? It isn’t, not unless a thing goes viral. Websites disappear, platforms folds, CEOs pivots. And as a result, the future may never know the meaning of our names. PJC